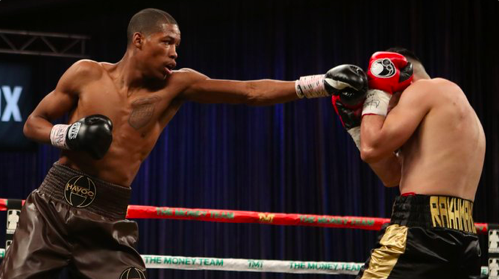 Solid W for Hunter, who beat Rakhmanov more decisively in this, their second scrap.
28
Feb
by Michael Woods

Keith Hunter tangoed with Sanjarbek Rahkmanov in April 2019, and won a split decision, so when Rahk-y was installed as his foe after Malik Hawkins had to bow out, the super lightweight Hunter came up with a plan for the rematch at Sam’s Town in Las Vegas on Friday evening.

Win more decisively, that was the Hunter intent going into the scrap with the Uzbek, and it looked like he was on target for that manner of finish.

A right hand, high on the head, gave Hunter an extra knockdown point in third. But Rahk showed ample toughness, stayed in Hunter’s face, and things got complicated when Hunter’s right hand started hurting in round seven. But the Las Vegas resident from a fighting family knuckled down, over-utilized his left and made it to the final bell. From there, the judges took over: 97-92, 98-91, 98-91…Hunter, via UD10. 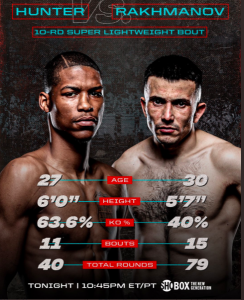 Three bouts screened on Showtime’s “ShoBox” program, and the action was called by the top-tier ultra vet Barry Tompkins, on blow by blow, with Steve Farhood and Raul Marquez providing analysis and color.

The 27 year old Hunter moved deftly in the early, launched from long range, utilized his reach advantage. Trainer Bones Adams told Hunter to stay acting like the bigger man, stay tall, don’t crouch, and fire one-twos after the second. In the third, down went Rahk. He got swarmed and smashed, more, but also landed a couple left hooks. He then grinned, and you remembered that before the fight he told everyone that he loves a good war.

He did, he didn’t fade, he didn’t the fact that his arms are pretty short, and by the sixth, you saw Rahk coming forward against a guy whose hands were lowering. But Hunter stayed focused, didn’t crumble, even when he landed a right, and then drew it back, because it stung.

Yes, his chin was tested and it held up, as the Uzbek, now 12-3-1, has decent hand speed, and proved it with the right. Hunter gets extra credit for pressing hard in the tenth to try and finish off Rahk, and fighting hurt.

HITCHINS GETS W, SHO CREW NOT SURE WHAT WAS PROVED IN THE WIN

Junior welterweight Richardson Hitchins (below) ran his record to 11-0, with 6 KOs, because his hand speed, and mobility, heck, his whole skill set, was a cut above the arsenal of Nick DeLomba. But the NY boxer wanted that to be more apparent. He didn’t want a distance fight, but got one. 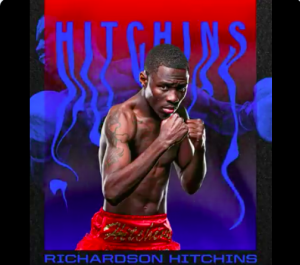 The hand speed edge was apparent in round one, for the winner. Trainer Lenny Wilson said to the winner, “It’s just a matter of time before he go,” after round two. Hitchins, age 22, was looking like it was just a matter of when, but then he lost a bit of steam.

“This kid is fading,” Nick’s trainer said after round six. Not truly, though.

Hitchins could maybe pile up combos more, in the minds of the fight callers, after they watched round eight. Steve Farhood said during round nine that he questioned Hitchins’ power, and right after that, the victor ate a right that he felt in his toes. Would he answer Farhoods’ declaration, because I think he heard it, he looked over at the booth after they said it.

In round ten, a right hand slammed Hitch, as the RI man wasn’t afraid to come forward. Tompkins called it a “dominant performance” for Hitch, but noted, “What we learned, I’m not sure” after the final bell. As we awaited the call of the cards, we heard Hitchins say, “I shoulda gone to the body more” as trainers Wilson and Andre Rozier took off his mitts.

IN THE DON’T JUDGE BOOK BY COVER DEPARTMENT…

The B side didn’t think he was that coming in, and proved it over ten rounds in the TV opener. Genc Pllana, the so-called “The Sexy Albanian” has atrocious form, if you are a person who thinks that fighters should stick to the technique script. His left hand never is above his waist unless he jabs, and foe Kevin Newman, age 28, might have thought from his stance along that he’d get the W…but no.

TSA, now 8-1-1, has solid hand speed, punches from strange angles, is strong, is aggressive, and though he didn’t have Roy Jones in his corner, he won.

The judges, bless them, did the right thing, scoring it for the Maryland resident, who is trained by Simon Brown, the ex 147 and 154 champ.

The Kosovarian Pllana threw almost twice as many punches as Newman (now 11-2-1), who lacked fire, and was told by Jones he was losing before the final round. Not being a punk, but he needs to have BoxRec scrub the nickname “The Second Coming.” 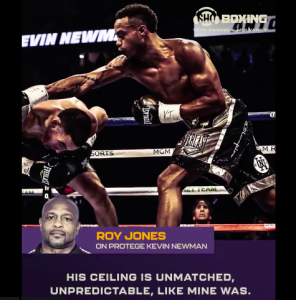 Trainer Roy Jones said coming in that Newman needs to believe in himself more, act like he is THE BOSS.

The Cali born Vegas resident can get it re-installed, but not before he gets some Ws.

I did a quiet whoop in my living room when I heard the scores 96-94 times three, for the super middleweight Albanian, who doesn’t possess a sexy or smooth style, but who knows how to FIGHT.

NOTE: I had some fun Friday night, with two posts I fired up before the ShoBox kicked off. I went one for two, I’d say. The first one, I went with an “out on a limb” headline, because I liked the sound of Hitchins’ voice, his confidence level, pre-fight, and believed he’d stop DeLomba. Props must got to DeLomba for not succumbing to that fate.

Then, I posted a story like 37 seconds before ShoBox started, which offered the POV that B sider Genc Pllana was and is much better than he might appear on first and second glance. That one made me happy, because guys that fight like Pllana usually get screwed, and I tip all the caps to Glenn Trowbridge, Patricia Morse Jarman and Tim Cheatham, for their acumen and independence of spirit, in awarding the outing to the correct recipient.