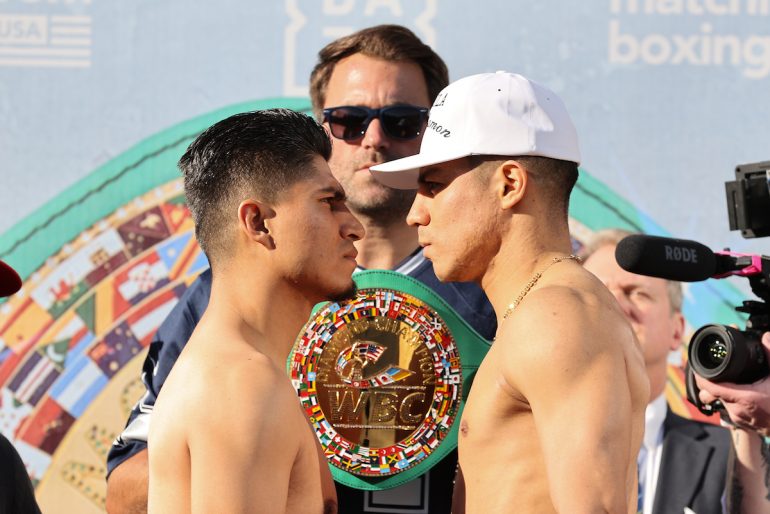 FRISCO, Texas – Mikey Garcia is hoping a victory on Saturday will help silence his doubters that believe he is too small for the 147-pound division.

Garcia officially weighed in at 145.8 pounds late Friday morning. Vargas came in right on the nose at 147 pounds.

They will meet in the main event of a 12-round bout that will headline a nine-bout DAZN card that will stream live from Ford Center at The Star, the home of the Dallas Cowboys’ training facility.

Garcia (39-1, 30 knockouts), 32, of Moreno Valley, California, who has won world titles at junior lightweight, lightweight, and junior welterweight, will fight for the first time since suffering a one-sided loss to now-unified titlist Errol Spence (26-0, 21 KOs) in their 12-round affair for Spence’s IBF welterweight title last March at AT&T Stadium in Dallas, where the Cowboys play.

Garcia also weighed in under the welterweight limit for the Spence bout, tipping the scales at 145½ pounds.

Vargas (29-2-2, 11 KOs), 30, of Las Vegas, a former two-division world champion, will return to the ring for the first time in 10 months when he scored a sixth-round knockout of former Mexican world champion Humberto Soto (69-10-2, 37 KOs) last April at The Forum in Inglewood, California.