Tyson Fury backed up his very bold prediction of beating heavyweight rival Deontay Wilder by knockout with a career-best performance on February 22 in Las Vegas. The Gypsy King took the fight to the feared puncher and undressed the American before a star-studded standing-room-only crowd at the MGM Grand Garden Arena, dropping Wilder with a right hand in Round 3 and again with a left to the body in Round 5. Wilder’s corner tossed in the towel in Round 7, giving Fury the victory, Wilder’s WBC title and the coveted Ring Magazine title, which was stripped from him back in January 2018 for inactivity.

Not just yet, according to the Ring Ratings Panel. 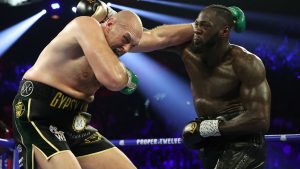 “Although not aesthetically pleasing on the eye, Fury is a heck of a fighter,” said panelist Anson Wainwright. “I’d like to see him enter the mythical pound-for-pound list off that outstanding win, but I don’t really want to see Manny Pacquiao drop out.”

Panelist Martin Mulcahey felt sure that Fury isn’t quite pound-for-pound top 10 material – yet.

“I don’t think defeating a one-dimensional puncher twice elevates Fury into the pound-for-pound top 10, not to mention his struggle against Otto Wallin,” said Mulcahey. “Yes, it was a very impressive victory but not as good as Pacquiao over Thurman for the last spot. Heavyweights are just not as talented as other divisions, so it’s harder for someone, even as talented as Fury, to accumulate credit. If Fury beats Anthony Joshua, then I will reconsider.”

Other panelists agreed with Mulcahey.

“I’d keep Pacquiao at No. 10. Fury is the next one in,” said Adam Abramowitz.

“Fantastic performance by Fury, but he doesn’t rate pound for pound quite yet,” said Michael Montero. “Let’s not get too caught up in the moment.”

“Pacquiao is being recognized for wins that he posted 10 years ago,” said Gray. “That’s nostalgia for you.

“Tyson is the best heavyweight on earth right now, but Josh Taylor should have been in first. Pound for pound kills me.”

Replied Mulcahey: “Pacman beat Thurman less than one year ago, I agree on Josh Taylor though.”

No debate was needed on where Fury goes in the heavyweight rankings – directly to the championship spot. It made sense to elevate Anthony Joshua, who regained three major world titles by avenging his lone pro loss against Andy Ruiz in December, to the No. 1 spot that Fury vacated. Joshua has more legit contenders on his resume than any other heavyweight. 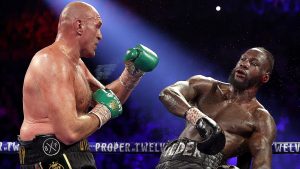 What to do with Wilder (42-1-1, 41 KOs) was the question. The Alabama native, who made 10 defenses of the WBC title, was more accomplished than anyone ranked below him, but he was thoroughly dominated by Fury. In the past, when an accomplished fighter is fiercely competitive in a losing effort, such as Nonito Donaire’s bold stand against Naoya Inoue in the 2019 Fight of the Year, the veteran is allowed to hold his ranking despite the loss. But this wasn’t the case with Wilder. Wainwright suggested dropping Wilder one spot, from No. 2 to No. 3, bringing Dillian Whyte, currently on an 11-bout win streak since his lone loss (to Joshua in 2015) that includes Joseph Parker and Dereck Chisora (twice), into the No. 2 void.

Only Mulcahey questioned Whyte being ahead of Wilder. (Some fans on social media were a bit saltier in their reaction to the new heavyweight line-up, but hey, when a fighter gets his ass kicked like Wilder did, he’s going to drop in the rankings. That’s boxing, boys and girls. Please do the bulk of your crying on your own timelines.)

Heavyweight – Fury regains champion status. Wilder drops from No. 2 to No. 3. Anthony Joshua and Dillian Whyte fill the void in the top two spots at Nos. 1 and 2 respectively. Oscar Rivas re-enters the rankings at No. 10.

Cruiserweight – IIunga Makabu advances to No. 3 after outpointing Michal Cieslak, who drops to No. 10. Kevin Lerena, who stopped First Arslan in six rounds, remains at No. 5.

Super middleweight – Caleb Plant advances to No. 2 following a 10th-round stoppage of unrated Vincent Feigenbutz, with the exit of Gilberto Ramirez, who hasn’t fought at 168 pounds in over a year. Caleb Truax remains at No. 7 after a stay-busy split-nod over unrated David Basajjamivule. David Lemieux enters at No. 10.

Junior middleweight – Jarrett Hurd remains at No. 4 following a 10-round decision over unrated Francisco Santana.

Welterweight – Danny Garcia remains at No. 6 after a 12-round decision over unrated Ivan Redkach.

Lightweight – Ryan Garcia advances to No. 5 after blasting unrated Francisco Fonseca. Jorge Linares re-enters at No. 8 after a four-round stoppage 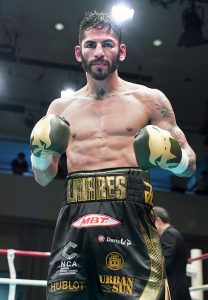 Despite setbacks, Linares wants to remain in the fight game. Photo by Naoki Fukuda

The panel gushed over Linares (and I don’t blame them).

“Linares had been a long-time champ at lightweight and has done lots of solid work in the division,” said Abramowitz. “He got iced by Cano at 140. I think he should come back into the rankings higher than No. 10. I think No. 8, above Tagoe, would be appropriate.

“I’ve always been a fan, so I am always up for moving Linares as high as possible. Linares-Garcia will be a hell of a fight!”

Said Gray: “Like everyone else, I’m a huge Linares fan. I gave him The Ring belt when he beat Anthony Crolla and watched him get stitched up without an aesthetic back in the dressing room. The needle and string were tugging at his wound so hard that his head was being wrenched to the side and he didn’t even flinch. You need to love that!

“Anyway, the bottom at 135 is VERY poor, so I can see him returning at No. 8. Beating up Carlos Morales is no great shakes, but Mendy looked awful against Campbell and Barthelemy hasn’t won a fight at the weight since 2016.”

Junior lightweight – Joseph Diaz Jr. advances to No. 2 with a unanimous decision over Tevin Farmer, who drops to No. 4.

Junior featherweight – Emmanuel Navarrete remains at No. 2 after stopping unrated Jeo Santisima in 11 rounds. Guillermo Rigondeaux exits the 122-pound rankings, now campaigning at bantamweight. Azat Hovhannisyan re-enters at No. 10. Murodjon Akhmadaliev enters ratings at No. 3 after scoring a split decision over Daniel Roman, who drops to No. 4. Hiroaki Teshigawara replaces Isaac Dogboe at No. 10.

Bantamweight – Rigondeaux, who scored a split decision over unrated Liborio Solis, enters the rankings at No. 10.

Junior flyweight – Elwin Soto remains at No. 5 after a stay-busy first-round blowout of ourneyman Javier Alejandro Rendon. Sho Kimura remains at No. 8 following a second-round stoppage of former titleholder Merlito Sabillo. Daniel Valladares exits the rankings after dropping down to strawweight. Agustin Gauto enters at No. 10. Daniel Matellon remains at No. 9 following a majority decision over unrated Erik Garcia.

Strawweight – Wilfredo Mendez remains at No. 3 following a decision over unrated Gabriel Mendoza. Pedro Taduran remains at No. 8 after engaging in a four-round technical decision against Valladares, who enters the rankings at No. 10.