Start spreading’ the news, looks like Teofimo Lopez vs. Loma is MSG bound 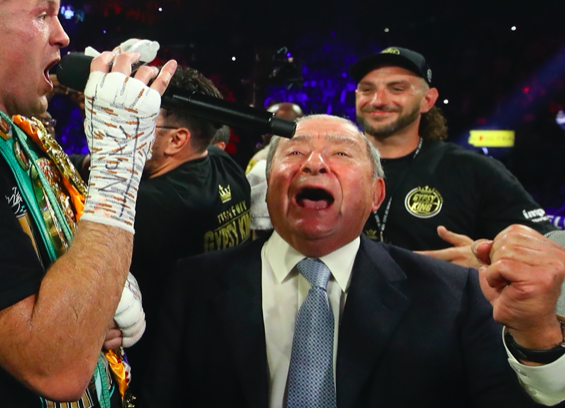 Is Arum singing "New York, New York" because he's got a site ready for Loma vs. Lopez? (Photo by Mikey Williams for Top Rank)
25
Feb
by Michael Woods

The all-time all-star boxing dealmaker Bob Arum did a hit on the Everlast “Talkbox” podcast, and he followed up on a subject he riffed on last week, on the same show.

The 88 year old Brooklyn born impresario had offered me a solid tibit of a hint when I asked when he’d be announcing particulars on what will be the second most-anticipated bout of the first half year of boxing 2020, a title challenge for lightweight ace Vasiliy Lomachenko (WBC, WBA, WBO 135 champ), by the insistent young gun Teofimo Lopez (IBF titleholder).

Pay attention to who I’m sitting with at the MGM, for the Tyson Fury v Deontay Wilder scrap, that’s what Arum directed me to do on Feb. 18.

“Who was sitting next to me?” Arum asked me on Tuesday’s show. 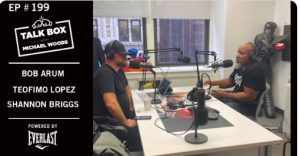 All A sides on this show: Shannon Briggs, Teofimo Lopez, journo Ron Borges, and living legend Arum, who spoke of the Tyson triumph and some summer plans.

I looked, but couldn’t see you, I said, dejectedly.

“I was right in the front row, on the right side was Lachlan Murdoch, sitting next to me, and on the left side was Jim Dolan.”

Murdoch, the 48 year old son of the titan of industry Rupert, 88 years old as well, is now the executive chairman and CEO of Fox Corp, headquartered in NYC. He’s been sprucing up Fox, adding and subtracting, based on current trends and momentum areas, like betting (Fox Bet).

Dolan is the chairman and CEO of Madison Square Garden, which has been putting mostly Top Rank boxing fare in that barn for a long spell, with Miguel Cotto finding an East Coast home at MSG. My guess is the Knicks boss knows that the Lopez kid could be a major-league seat-filler if he were to snag the upset and usurp Loma.

So, why didn’t I see Arum? Errol Spence was a row behind him, and Terence Crawford a row back from him, and I got distracted by that talent assemblage. Oh, if you’re asking, that welterweight scrap didn’t get made in Vegas. Arum wouldn’t talk to Spence without talking to PBC bossman Al Haymon, he noted.

And back to that lightweight super-fight, set in pencil almost Sharpie for May 30.  “You’re never sure, unless you test somebody like a Teofimo, you don’t really know how good ultimately he’s gonna be. And now he’s been tested. I mean, most people didn’t give him much of a chance against Comey, he blasted Comey out, and he’s ready,” Arum said. “I don’t know of any lightweight in the world who’s more formidable, against Lomachenko, than Lopez.”

So, I think it is almost safe for me to start humming “Start spreadin’ the newwwwws” and cement plans for staying in town the end of May.