Kenny Bayless on Fury-Wilder2: If the corner didn’t stop it, I was very close to stopping it myself 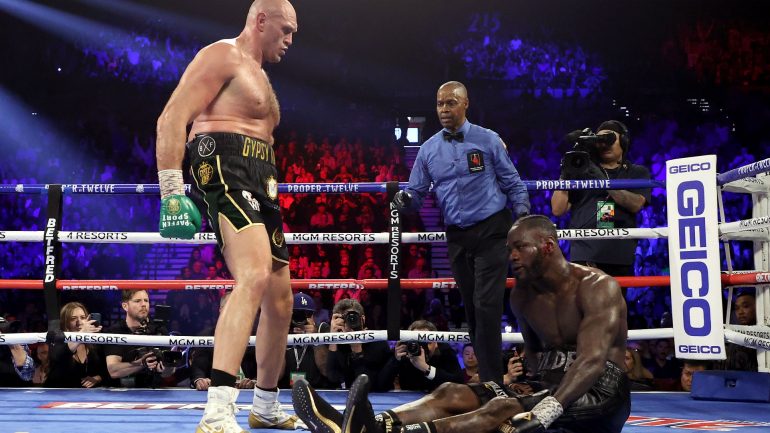 Deontay Wilder didn’t look right Saturday night, and told Lance Pugmire of The Athletic that the 45-pound costume he wore to the ring, which Wilder took accountability for, may have had something to do with it—other than the 58 power punches (which produced two knockdowns) that Tyson Fury landed en route to regaining the Ring Magazine heavyweight championship and wresting the WBC belt away from Wilder in the American’s 11th title defense.

It also didn’t help that Wilder was doing heavy pad work late Friday night after the weigh-in, according to two reliable sources. According to another source, “Fury was in Wilder’s head, and was over-training for the fight, doing too much media and too much social media.”

Wilder told Pugmire, “If I say I’m going in there to try to kill a man, I accept that in return: he will have to kill me as well, we’ve talked about this for years and years. I’ve told them many times that if anyone throws the towel in on me, there will be consequences.”

Wilder was critical of referee Kenny Bayless, stating that Bayless failed to confront Fury over punches to the back of his head. But Bayless did deduct a point from Fury for leaning down on Wilder in the fifth round. Bayless peered in on Wilder’s corner between the sixth and seventh rounds, concerned that Wilder might not have much resistance left.

Bayless’ suspicions were confirmed by Wilder’s corner. Fury had Wilder defenseless in the corner and Mark Breland, the 1984 U.S. Olympic welterweight gold medalist, threw in the towel at 1:39 of the seventh round.

Jays Deas, Wilder’s trainer, was opposed to throwing in the towel.

“We’re a little bit like that. During the (seventh), Mark said something about throwing the towel in. I told him, ‘Don’t do that.’ I didn’t think he should do that. Deontay is the kind of the guy that goes out on his shield. He will tell you straight up — don’t throw the towel in. Then the fight went a little bit longer and I saw the towel go in. I haven’t talked to Mark about it, but we’ll talk about it and figure out what exactly happened.”

“I’d rather die in the ring than have the towel thrown in. I’m a warrior,” Wilder told Pugmire. “I understand — it’s an emotional decision — but that’s not (Breland’s) position. I’m not being emotional now. For many, many years, I have talked about this to my team. They know my demeanor, my warrior mindset and if I say I’m going in there to try to kill a man like I have, I accept that in return: he will have to kill me as well. I’ve told them many times that if anyone throws the towel in on me, there will be consequences.

“We love Mark to death and he’ll always be part of the team. I understand they don’t want me to get hurt, but I was in more danger when I got buzzed against (Luis) Ortiz (in my first fight) than I was in this one,” Wilder said. “Jay told him not to (throw in the towel). Jay is the first. Mark did it anyway.

“I still had my senses. Fury’s blows don’t hurt. I just didn’t have the legs at all to get out of the way and to show people I was still a warrior who was still going to fight.”

But as Bayless said, if Breland did not stop it, he would have.