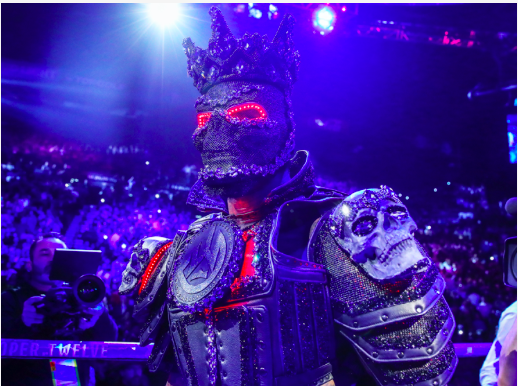 The dust has settled, and Deontay Wilder has settled on some explanations, as to why he wasn’t his best self Saturday night at the MGM Grand against Tyson Fury.

The Alabama boxer came to the ring with a 42-0-1 record, and left beaten, bloodied and bruised, of body, and, it seems, ego.

The 34 year old hitter was knocked down in round three, and again in round five, by a brutishly effective Tyson Fury, who took it to Wilder from second one, and didn’t let up. A Fury blitzkrieg in round seven was too much for kind-hearted assistant trainer Mark Breland, who threw in a white towel, to indicate surrender on behalf of his guy Wilder. 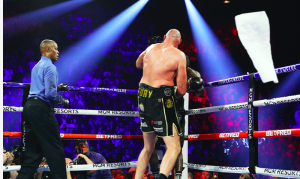 Breland threw in the towel, might have saved a life…and Wilder is saying he may fire the guy. Thanks for nuthin,’ then! (Photo by Mikey Williams for Top Rank)

Breland was lauded, virtually across the board, by most all media and fans. But Wilder took exception. His head trainer Jay Deas said on Sunday AM, at the post-fight presser, that Wilder is the type to want to “go out on his shield.”

Wilder reiterated that on Monday, in chats with Kevin Iole of Yahoo, and Lance Pugmire of The Athletic.

Wilder is indicating he will dump Breland, easily one of the nicest souls you will ever meet in this, and any other game, and that is striking a nerve on social media. That man might have saved your life, is the response of a good number of people weighing in. But drawing even more attention is the most novel excuse Wilder is offering for being off his game: he told Iole and Pugmire that the costume he wore to the ring was so heavy, it sapped his legs.

That assertion made it’s way around Twitter, and a goodly number of folks asked if this was April Fool’s, or if Wilder was making a crack. Seems not.

He told the Yahoo writer, “He didn’t hurt me at all, but the simple fact is, Kevin, that my uniform was way too heavy for me. I didn’t have no legs from the beginning of the fight.” 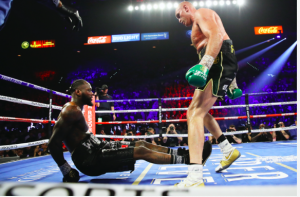 Fury’s punches took Wilders’ legs out from under him, it appeared, but Deontay says his costume damaged his stilts. (Picture by Mikey Williams for Top Rank)

He estimated the outfit, a cool-looking futuristic robotic deal, was more than 40 pounds. Some of my friends in the military messaged me, asking, “WTF,” because they have worn packs weighing up to maybe 120 pounds, during long treks, of 5 to 25 miles, and were able to deal.

More from Wilder; the ex WBC champ said that he’s leaning toward ditching Breland. Wilder has frequently said in the past that he wants a body on his record and said he’d emphasized to his team, including Breland, many times that they were never to stop a bout.

Wilder said to Iole he still loved Breland but that he wouldn’t be part of the team going forward as a result. (Lance Pugmire Tweeted out that Wilder does want to fight Fury again, for the third time, and also that he is “re-evaluating retaining” Breland…which sounds like his mind isn’t fully made up.)

“I am upset with Mark for the simple fact that we’ve talked about this many times and it’s not emotional,” Wilder said to Iole. “It is not an emotional thing, it’s a principle thing. We’ve talked about this situation many, many years before this even happened. I said as a warrior, as a champion, as a leader, as a ruler, I want to go out on my shield. If I’m talking about going in and killing a man, I respect the same way. I abide by the same principle of receiving.”

Regarding Wilder talking about “wanting a body” ie killing a man in the ring, many, many fans had that stored away, and told me after that they were not unhappy that Fury kicked Wilders’ ass, because of that insensitive yapping, talking about wanting to kill a foe. Karma kicks back, was the message some Fury fans were yelling early Sunday morning.

Wilder had another explanation or excuse, or dog to kick. Referee Kenny Bayless drew his scorn. Even though Bayless was too quick on the trigger, maybe, and took a point from Fury in the fifth, for grabbing and pushing, Wilder put a bulls-eye on Kenny Monday.

Strangely, Wilder ended on a high note after the flurry of “explanations,” saying “I’m super happy for Tyson Fury and I really want to give him my complete congratulations.”

My three cents: The outfit-legs excuse is as bizarre as I’ve heard in my decades of covering the sweet, savage and oft goofy science. But more egregious is the seeming decision to fire the man who maybe saved your life. I called Breland, it went to voice mail. So, I don’t know if he’s been pink-slipped yet, and if he has, I don’t know if he’d accept a change of heart from Wilder. But this I know, after this kick-up of dust has settled, Mark Breland’s reputation, already sterling, will only be improved. The same cannot at all be said for the reputation of Deontay Wilder.