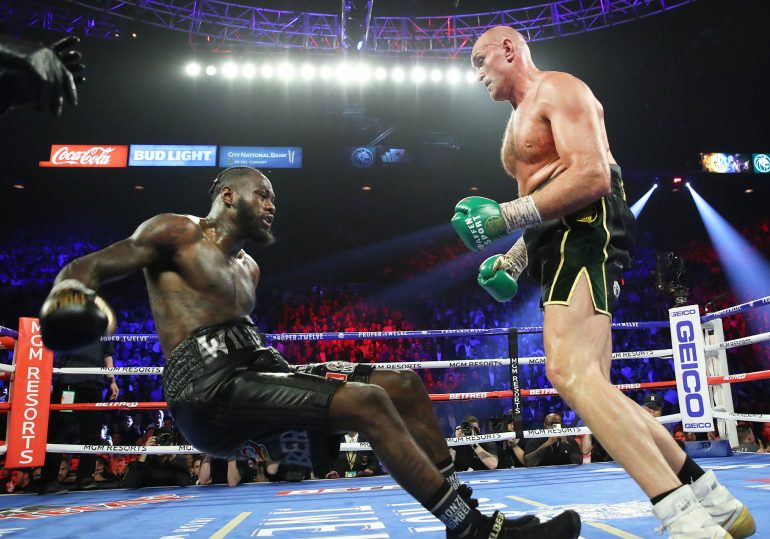 LAS VEGAS — Somewhere, you just knew Emanuel Steward must have been smiling. The famous leaning tactic that was born in the renowned Kronk Gym by the master trainer was well on display Saturday night before a sellout of 15,816 at the MGM Grand Garden Arena. The event’s near $17 million gate was the largest grossing heavyweight fight in Nevada history.

Carrying the great Kronk tradition forward, Tyson Fury’s new trainer, Javan “SugarHill” Steward, the late Hall of Famer’s nephew, wanted “The Gypsy King” to come in heavier for the rematch with Deontay Wilder—and there was a reason for it. Fury used his 273 pounds on the smaller Wilder as a body rest, wearing the WBC titlist down, and eventually wearing him out at 1:39 of the seventh round.

Fury (30-0-1, 21 knockouts) dropped Wilder in the third and fifth rounds, but it was clear after the sixth that Wilder had nothing left.

“A big shout out to Deontay Wilder,” Fury said. “He came here tonight and he manned up and he really did show the heart of a champion.

“I hit him with a clean right that dropped him and he got back up. He is a warrior. He will be back. He will be champion again.

“But I will say, the king has returned to the top of the throne!”

At the time of the stoppage, judges Dave Moretti and Steve Weisfeld had it 59-52 giving every round to Fury, while judge Glenn Feldman had it 58-53, giving Wilder the second. The Ring had it 59-52, in agreement with Moretti and Weisfeld.

DOWN GOES WILDER! FURY SCORES A KNOCKDOWN IN ROUND 3!

At the outset, both began pecking away with jabs. As he promised, however, Fury was more aggressive this time. Though 16½ pounds heavier than the first fight, Fury looked in the best shape of his career. Making his 11th WBC title defense, Wilder came in at a career-high 231 pounds. But whereas the added weight helped Fury, it bogged down Wilder.

What gets lost is that in their first fight, Fury outlanded Wilder, 84-71 overall, in 46-40 jabs and 38-31 in power. According to CompuBox, “Fury led 9-3 in total connects and landed power punches as well as 6-2-4 in landed jabs, but while Fury won his rounds by mostly small margins (two or fewer connects in seven of his nine rounds in terms of total connects), Wilder won his rounds by larger gaps (2, 6 and 6, with the final two figures being the knockdown rounds of nine and 12). That dynamic might explain the wildly divergent scorecards. Fury was more accurate in all phases (26%-17% overall, 21%-16% jabs and 37%-17% power).”

Jay Deas, Wilder’s trainer, was opposed to throwing in the towel, but it was co-trainer Mark Breland who threw in the towel.

“We’re a little bit like that. During the (seventh), Mark said something about throwing the towel in. I told him, ‘Don’t do that.’ I didn’t think he should do that. Deontay is the kind of the guy that goes out on his shield. He will tell you straight up — don’t throw the towel in. Then the fight went a little bit longer and I saw the towel go in. I haven’t talked to Mark about it, but we’ll talk about it and figure out what exactly happened.”

Fury did stick out a jab that caught Wilder’s attention in the last minute of the first round.

In the second, the round that Fury predicted he would knock out Wilder, the Gypsy King stalked Wilder, but couldn’t come close to making his prediction come to fruition. The round ended with Fury smothering Wilder in a corner after the two missed each other with wild swings.

The pace changed suddenly in round three when Fury landed a right hand near the back of the head, catching Wilder around his left ear, putting him down. Wilder later fell again, though referee Kenny Bayless called that a slip. 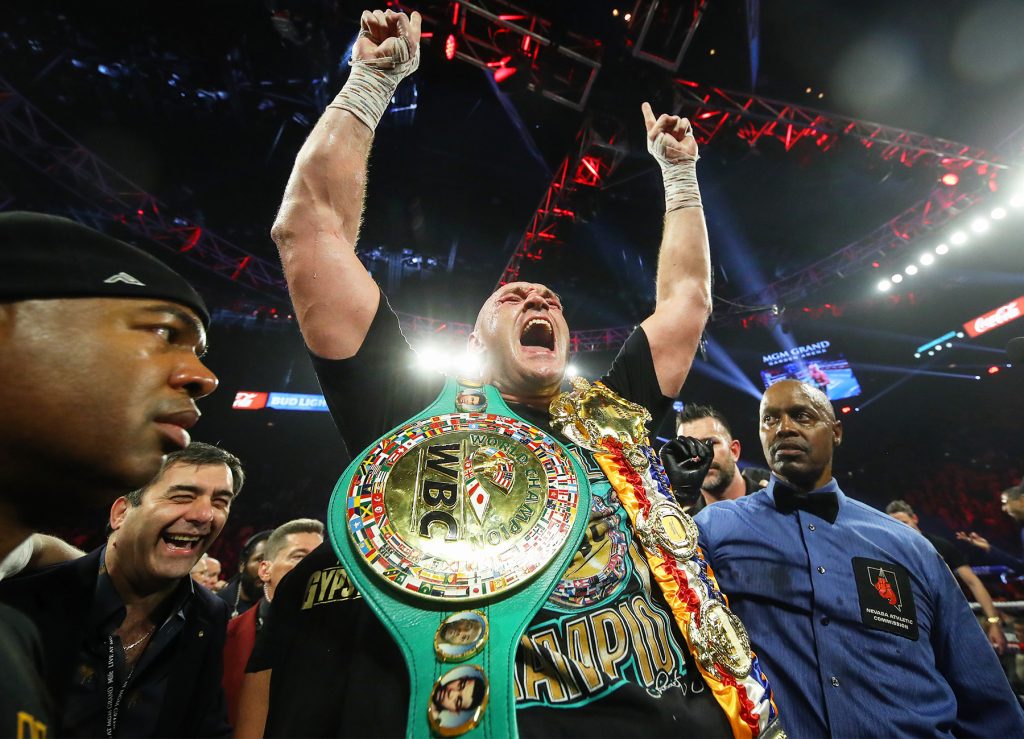 With 2:10 left in the fourth, Wilder was on the canvas again—this time, however, tripping over Fury’s right foot when he backpedaled.

Fury opened the fifth with a big right, which had Wilder reeling. A few seconds later, Fury jolted Wilder’s head back with a right uppercut inside. A minute after that, Wilder found himself back on the canvas again, dropped for the second time with a right hand to the head followed by a wrenching left to the body.

With time waning in the fifth, Wilder was in the most trouble of his career. Wilder got a reprieve  when Bayless warned Fury about leaning on him, then took a point from the Gypsy King for putting Wilder in a headlock. In clinches, Fury did bend down on Wilder’s neck until Bayless would intervene. Under the tutelage of Emanuel Steward, Lennox Lewis was sometimes known for pushing down on the back of opponent’s necks and slamming in an uppercut. It’s how he finished Michael Grant and Mike Tyson.

Fury’s leaning ploy seemed to wear down Wilder, who could not do much in the sixth. Fury outlanded him in the round, 17-3, with 14 of the 17 connects being power shots. Flagging on wobbly legs, Wilder only could muster 18 punches in the round to Fury’s 58.

When Fury pressed Wilder, “The Bronze Bomber” could do little to resist. There was also something interesting to note: Bayless peered in on Wilder’s corner between the sixth and seventh rounds, concerned Wilder might not have much resistance left.

A round later, his suspicions were confirmed by Wilder’s corner.

Fury started the seventh with a left hook, and again Wilder was backing up. Wilder had no legs. He was standing on pride and little else.

Trapped in a corner, Wilder was on the receiving end of a Fury barrage, when Breland threw in the towel. Bayless immediately stepped in at the 1:39 mark of the seventh to mercifully end it.

“I’m doing good. Things like this happen,” Wilder said. “The best man won tonight, but my corner threw in the towel and I was ready to go out on my shield. I had a lot of things going on heading into this fight.  It is what it is, but I make no excuses tonight. I just wish my corner would have let me go out on my shield. I’m a warrior. He had a great performance and we will be back stronger.”

Fury entered the ring to the classic Patsy Cline tune “Crazy,” wearing a flowing, red velvet robe and a crown sitting on a rolling throne. He left the ring as the heavyweight champion of the world crooning a wonderful rendition of Don McLean’s classic “American Pie.”