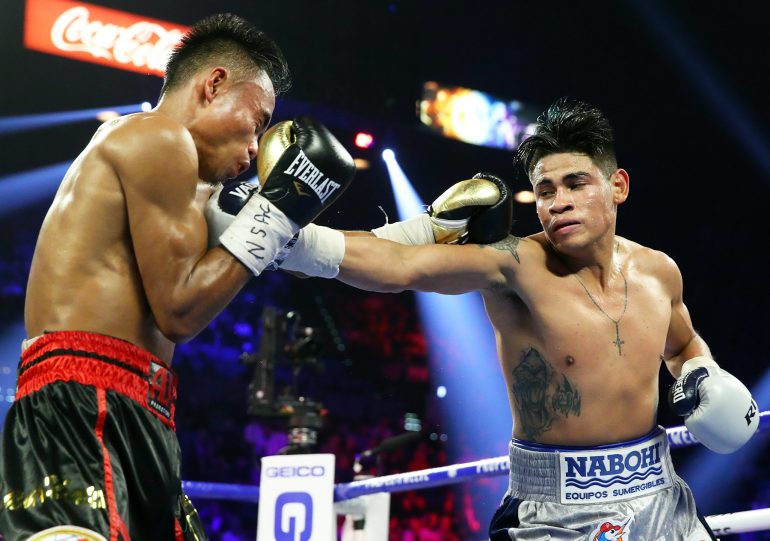 LAS VEGAS — The WBO junior featherweight title bout between the reigning titlist Emanuel Navarrete and challenger Jeo Santisima featured a pair of fighters who had not lost in a long while.

Navarrete’s sole defeat came eight years ago in a four-rounder in which the opposing fighter didn’t even show up for the weigh-in. Santisima, a relative unknown, had not lost a fight in six years—reeling off 17-straight victories since then.

Someone’s streak had to give Saturday night on the Deontay Wilder-Tyson Fury 2 undercard from the MGM Grand Garden Arena, in Las Vegas, Nev. 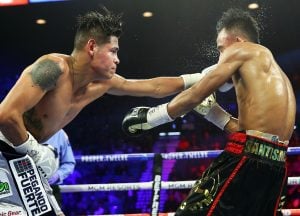 Emanuel Navarrete pulverized Jeo Santisima for 10 rounds, before the fight was finally stopped in the 11th. (Photo by Mikey Williams/Top Rank)

In the end, Navarrete (31-1, 27 knockouts) successfully defended the WBO title for the fifth time with an efficient, clean 11th-round stoppage to continue his winning ways, while Santisima saw his 17-fight, six-year streak come to a crashing halt.

In the third, the 25-year-old Navarrete began opening up and backing up Santisima (19-3, 16 KOs). He landed a few lefts to the body, and bounced a right off the Filipino’s head.

Santisima, feeling the fight may be slipping from him, came out more aggressive in the fourth. He was the stalker, backing up Navarrete and slamming the beltholder with a few body shots. By the middle of the round, Navarrete has turned the stanza in his favor, attacking Santisima to the body and the head.

As the fifth round began, it looked as if Navarrete was in control. He took Santisima best shot in the fourth, and reversed the momentum of that round to put the challenger back on his heels.

In the fifth, Navarrete was back forcing Santisima to retreat. He appeared to have Santisima in some trouble in the latter portion of the round, pinning Santisima against the ropes under a barrage of punches from all angles.

He had referee Russell Mora looking in—but it didn’t reach a point where Santisima had to be saved yet.

In the fifth, Navarrete had outlanded Santisima 46-6 in power punches.

In the sixth, a Santisima counter left was met seconds later by a Navarrete counter left. For the opening moments of the seventh, Navarrete switched to southpaw, before resorting back to an orthodox stance.

Navarrete relentlessly pursued Santisima in the seventh, barely giving the challenger time to come up and breath.

After nine, Navarrete looked like he had a firm grasp of the fight.

In the 11th, Navarrete poured on the pressure and Santisima had to be saved from himself. Mora stepped in and ended it at 2:20.