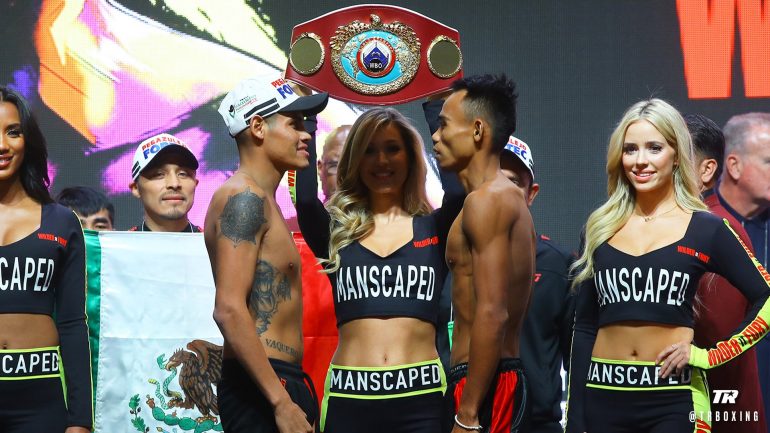 Emanuel Navarrete has kept a very active schedule since winning the WBO junior featherweight title, and may look to move up in weight soon. Photo from Top Rank
21
Feb
by Francisco Salazar

Emanuel Navarrete has been dubbed ‘The Iron Man’ as of late because of the number of times he has fought in recent months. He would rather be called the undisputed world champion at 122 pounds.

That may not likely happen if Navarrete decides to move up in weight.

First things first, Navarrete will defend his WBO title against Jeo Santisima Saturday night at the MGM Grand in Las Vegas. The fight will be the second bout on the pay-per-view broadcast (9 p.m. ET/ 6 p.m. PT) which is headlined by the WBC heavyweight the fight between Deontay Wilder and Tyson Fury.

At Friday’s weigh-in, both Navarrete and Santisima weighed in at the limit of 122 pounds.

Navarrete (30-1, 26 knockouts), who resides in the Mexico City area, stopped Francisco Horta after round 4 of his last bout on Dec. 7. The world title defense marked the fourth fight within a seven-month time period.

The 25-year-old has improved his skill-set over the last several months to compliment his devastating punching power. He has stopped 12 of his last 13 opponents.

Navarrete will face an opponent in Santisima (19-2, 16 KOs), who is a big-puncher, but has nowhere near fought the level of opposition Navarrete has. After splitting his first four fights as a pro, Santisima has won his last 17 bouts, 15 by knockout.

Even though Santisima is the significant underdog, Navarrete is not overlooking the 23-year-old, who is fighting for the first time outside the Philippines.

“Santisima is a dangerous fighter who will be well-prepared for his first opportunity at a world title belt,” Navarrete told The Ring early Friday morning. “I am also well-prepared for whatever challenger Santisima brings and I am looking to win by knockout.”

Including his fight against Santisima, Navarrete will be fighting for the fifth time in a span of nine months, unheard of amongst the world titleholders or contenders in boxing today. Some wonder if Navarrete would be prone to injury or may face burnout from fighting often.

Navarrete downplays those theories, pointing out he loves to fight and is glad he is fighting often.

“I like to stay active,” said Navarrete, who is co-promoted by Top Rank and Zanfer Promotions. “I’ve gotten used to the routine of fighting often and I’ve taken advantage of these opportunities. Thank God I have not received much punishment in my last couple of title defenses, and thanks to that, I’ve been able to defend my title often.”

Navarrete has been mentioned in the same breath with some of the best fighters at 122 pounds, including WBC titleholder Rey Vargas and newly-crowned IBF/ WBA titleholder Murodjon Akhmadaliev, who defeated Daniel Roman by a close split-decision to win the titles.

While he has been satisfied defending his world title belt, Navarrete has yearned to fight the other world titleholders to unify all the belts.

“I’ve been looking forward to that unification fight, but unfortunately none of the other titleholders have accepted that challenge. My objective is to unify the division, but I can’t wait any longer. It is difficult for me to make weight each time. I’m not going to stay that much longer at 122 pounds.”

As for who is the best fighter at 122 pounds is, Navarrete believes it is he.