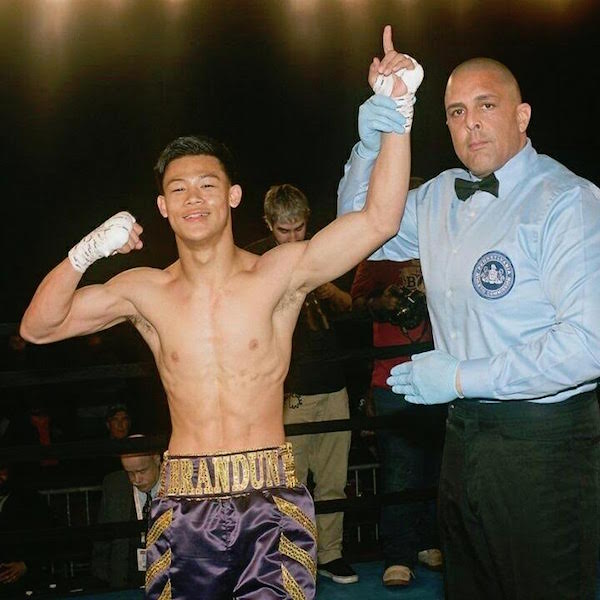 Unbeaten junior welterweight prospect Brandun Lee will square off against Camilo Prieto on March 13, it was announced Thursday afternoon.

The 10-round bout will take place at the Grand Casino Hinckley in Hinckley, Minnesota and will headline a four-bout ’ShoBox’ telecast (Showtime, 10 p.m. ET/ 7 p.m. PT).

Lee (18-0, 16 knockouts), who resides in La Quinta, Calif., had a stellar amateur career that culminated in almost 200 victories, to go against only five defeats. In recent fights as a pro, Lee has displayed vicious power to go along with an improving skill-set.

In his last fight on Jan. 17, Lee stopped Mexico’s Miguel Zamudio in the opening round. He has knocked out his last nine opponents.

The 20-year-old made his ‘Shobox’ debut on Sept. 20, stopping Milton Arauz of Nicaragua in round 2. He has sparred the likes of Mikey Garcia, Devin Haney, Timothy Bradley Jr., Mauricio Herrera, and Thomas Dulorme.

Having signed a promotional deal with Cameron Dunkin, Lee believes he can impress in the ring and strive to use any and all platforms to make new fans.

“I’m excited to be headlining my first Showtime show,” said Lee, who is half Korean, half Mexican and attends a nearby college. “I’m looking forward to giving fans something different that they haven’t seen from me before. They’re going to see me display my boxing skills a lot more. In my last two fights, I feel like I didn’t really show how good my defense is. I’m going to use the left hand a lot more to feel him out. And then, when the time is right, I will drop the bombs.”

“Headlining my first ‘ShoBox’ is a huge accomplishment. It’ll sort of be like graduating the high school of boxing. After this, I hope to move onto the university level of boxing like ‘Showtime Championship Boxing’ or pay-per-view.”

Prieto (15-1, 10 KOs), who is originally from Cuba and now resides in Miami, Fla., defeated veteran Yogli Herrera by unanimous decision in his last bout on Nov. 23. The 33-year-old has won his last seven bouts since losing to journeyman Aneudy Matos by majority decision in February 2017.

In the co-feature, welterweight prospect Brian Norman, Jr. will take on Flavio Rodriguez in an eight-round bout.

Rodriguez (9-1-1, 7 KOs), a Los Angeles resident, has not fought since Apr. 27 when he defeated Gaku Takahashi by majority-decision.

Lightweight Alejandro Guerrero (11-0, 9 KOs) of Dallas, Texas will square off against Ecuador’s Jose Angelo (12-1, 5 KOs) in an eight-round lightweight bout.Lee, Norman, and Guerrero are all signed to promoter Cameron Dunkin.

In the opening bout of the ‘ShoBox’ telecast, featherweight Aram Avagyan (9-0-1, 4 KOs) of Armenia will take on Dominican Dagoberto Aguero (17-0, 11 KOs) in an eight-round bout.