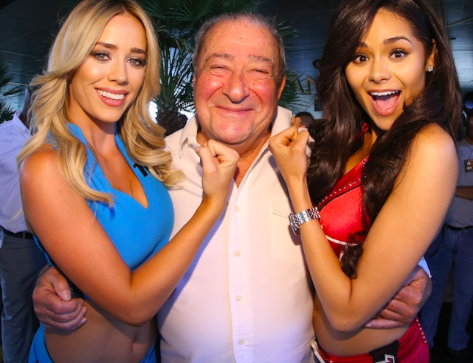 Arum can throw verbal darts with the best of them, but he has a mega charming side, and isn't afraid to change his tune, buddy up to an ex rival. (Photo by Mikey Williams, for Top Rank)
21
Feb
by Michael Woods

Bob Arum has taken Donald Trump to the woodshed almost as much as he has Eddie Hearn.

But, you know about strange bedfellows, in politics, and boxing.

Arum now says he’d welcome Trump to the big bout on Saturday, at MGM Grand. Yeah, that guy, who Arum has spoken of more disdainfully than he has Eddie, or Dana White, even.

It sounds also like the red carpet would not get unfurled at the MGM for the possible Dem nominee for the White House slot in the fall, Bernie Sanders, the Senator from Vermont.

Arum did a hit on the Everlast Talkbox podcast Tuesday, and told me that he likes Joe Biden for primary season, but, overall, he’s feeling “anybody but Bernie.” Sanders, he said, is like the US version of Jeremy Corbyn, who was bettered in the UK general election in December by Boris Johnson. The Conservative downed the Labour leader, who identifies as a “democratic socialist.”

Yep, same as Sanders, the 78 year old Independent, who, like Arum, was born in Brooklyn. That’s not enough to sway Arum, the 88 year old deal-maker who told me in 2015 that the stock market would crater if Sanders won the nomination. Time hasn’t softened his stance on Sanders. 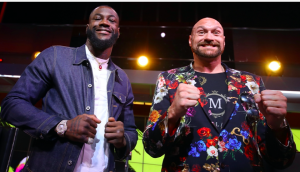 Arum has no love for Trump…but if Trump could lure some peeps to MGM Saturday, or up the PPV buy number, then Bob can put aside his distaste.

Now, you probably don’t recall, but back in May 2016, Arum pitched a PPV event, Trump vs Sanders, in a debate.

“It’s the debate of the century between two of the top pound for pound politicians in the country — Mr. Trump, the Republican Party’s presumptive nominee and Senator Sanders, the Democratic candidate,” said Arum, CEO and founder of Top Rank. “We have two contenders ready, willing and able to go mano a mano over the most important issues facing the United States. And I am ready to promote it.”

One of the terms would be: 80% of the net proceeds would go to the charity or charities of the candidates’ choice, agreed upon in advance. The concept never got off the ground, so we didn’t learn if Trump would have picked the Donald Trump Foundation as his charity.

Back then, I asked Bob if he’d vote Trump over Sanders. The long-time pal of ex Senate majority leader Harry Reid responded, “Hillary is by far the best of all.”

That idea may have been hatched when I saw him in February 2016, and he suggested this main event:

Arum versus Trump, in Madison Square Garden. Anytime, proceeds go to charity, Arum told me. That was the next super fight he wanted to put together, he said, while he was hyping an MSG Theater show topped by Terence Crawford. I pitched Arum vs. the combover king for the Theater.

Eff that, said Brooklyn Bob. “Screw the Theater at MSG, the big arena! We will do it in the big room, anytime he wants. Proceeds go to charity. Lemme take on Donald Trump! I’ll handle him, not like these guys who don’t hit him, who hit him with kid gloves…It’s a disgrace,” he continued. “You can’t say what he’s saying, saying these hateful speeches, when you’re running for President of the United States.” 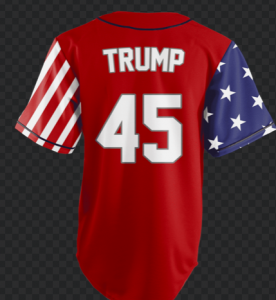 In October 2016, Arum opened fire on old ultra-rival Don King, blasting the high-haired boxing Barnum: “He’s a traitor to his people…how can you back a bigot like Trump…Don King disgraced himself by being for Trump.” This was a month after King had introed Trump at a Trump campaign event, in Cleveland, Don’s old stomping grounds, and used a term many felt inappropriate for the occasion. This was a two-fer-one deal, Bob could hit two big birds with a single stone.

Fast forward to March 2018; Trump had already gotten heat left, right and center, and one doozy came after it leaked that during a White House meeting, he referred to African countries as well as Haiti, as”sh*t-hole countries. Arum brought this up when he was with Don King, to co-promote a Jose Ramirez 140 pound title defense against Amir Imam, then with DKP.

“(Don is) a Trump supporter and I’m really horrified see this country run by a president who is not fit and qualified…He’s someone we should fear for the danger he could be,” Arum said. “I love standing up for immigrants; I really feel that sincerely. It’s not something I do for a laugh.”

You get the point…Or you need more examples of Bob signaling his distaste for the failed casino magnate?

But back to the bedfellows construct…

“If the President of the United States, even though it’s not my party, wants to come to the fight, I would of course welcome him,” Arum told boxing media in a scrum after the Wednesday Wilder-Fury presser at MGM. Wait, even though you detest him? “So what, it’s worth it, he has a tremendous following,” Arum said. Trumpsters in “Alabama, and Georgia, and those places, are gonna tune it to the pay per view.”

And who is he liking, as this primary season plays out? Will he vote for Sanders, in the Nevada primary on Saturday (yes, same day as the big bout). “No, I wouldn’t vote for Bernie, I mean, it’s killin’ me, because if it is Bernie, the Democratic candidate, I’m gonna hold my nose and vote for Trump.”

The scrum gasped, as if Bob just said he made kindergartener stew for dinner the night before. So, if Trump wants to come, he can come. Arum said he thinks the commission would make room for Trump in the arena. “So finally he’d get a good seat for a fight,” he said, chuckling.

He delved into it more with Brit fightwriter Gareth Davies; the Las Vegan said if Trump attends the bout, the night after his rally in Nevada, “we would accommodate him.” But, Arum cracked, he’d hand out “Bloomberg For President” signs to fans at MGM, and would alert Trump to that.

Arum recounted the story of how Trump “screwed him” out of $2.5 million dollars, during the George Foreman-Evander Holyfield promotion. Trump wanted to nix him providing the site, because the Gulf War broke out, and Arum asked what the heck that had to do with putting on a prize fight in New Jersey. Arum said that this one was a monster bout, did 1.6 million PPV buys…and him and Trump hashed out a deal, which came to $2.5 million less than had been in play before the Gulf War switcheroo.

So, yesterday you screwed me, didn’t even buy me dinner first, but today, we can be friends.

Or, at least, approximate that. Boxing has that over on politics, maybe, with shifting alliances.

In March of 2016, Trump and Cruz were vying to be the GOP nominee and the mud from their feud splattered all over the Twitterverse. Trump posted a pic that insinuated that Ted’s wife was homely, Cruz made fun of Donald’s private part portioning, but they got over it, and Trump switched from calling the Texan “Lying Ted,” to “Beautiful Ted.” By October, Cruz was making phone calls, get out to vote calls, on behalf of Trump. Yes, he looked like he’d eaten a bad batch of clams and then sat on a cactus…But present needs were of more import than maintaining a grudge, or standing up for the mother of your kids.

So, you get the point. Yesterday’s enemy can be today’s friend, if a new enemy spurs an unlikely bonding. “The enemy of my enemy is my friend,” goes the old saying. That thinking helped Cruz and Trump make nice, and also applies in the case of Arum, and Trump. The enemy in this context is Sanders, because he’s said when elected he’d up the top personal tax rate to 69.2% on labor income and 55.8% on investment income. Arum’s net worth is such that he’d probably get hit by another tax, a 3% rate, annually, as part of Sanders’ “wealth tax,” which would be installed to close the income/net worth gap between the Haves and the Nots. Not to mention, Sanders has floated an estate tax increase, and someone in Arum’s bracket would take a hit to the tune of 55% when his estate is tallied up. (NOTE: That could be the main reason Arum might sell Top Rank, to get out ahead in his estate planning.) Right now, the tax on an Arum level estate is 40%. Now you better understand why Arum looks at Sanders and sees Don King, circa 1975?

So, does Arum actually now see Trump as his “friend?” No, there will be dinner dates and all is forgiven hugs between the two…I don’t think.

But Arum is a business-man, through and through. He’d have to tell you if business ranks as his No. 1 love, but whatever the place on the list of loves, he is thoroughly passionate about the exercise. And, of course, he wants to succeed mightily at everything he does, and that includes over-delivering on this heavyweight sequel. Arum has said that the event will do 2 million buys. That’s a high bar, being that their first scrap did 325,000 buys. I’ve heard that the promotion needs to do more than 1.2 million buys, to get past break even. So, yes, Arum is hoping that the promotional muscles of ESPN and FOX can push this event to snag four times more eyeballs than last time. Not easy, even with ESPN and FOX doing their brawny best to attract interest. The appearance of Trump at the MGM, the night after he has a rally scheduled in Nevada, would mean more ink for Arum, for the Wilder-Fury rematch. How many more eyeballs? Impossible to even guesstimate, but Twitter traffic and trending would accelerate, and that many more people will at least be aware that this niche-sport extravaganza is occurring.

So, who wants to be the bearer of bad news? Korn, you tell ‘im…A glimpse at Trump’s public schedule shows him doing a rally at 12 PM, Vegas time, and then at 1:50 PM, he is in a plane, headed to DC. 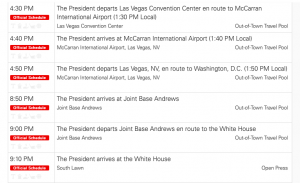 Sorry, Bob. Hey, Arum did say that he liked Amy, in that scrum, meaning “Klobuchar,” and I think the Minnesota Senator maybe could be convinced to trek to Vegas, and see if Wilder can drop and this time stop Fury.

At the Wednesday night Dem nominee debate, which saw Warren at the Paris Theater kick in so many of Bloomberg’s teeth, he’s still pawing for those Skittles on that stage floor, Klobuchar won the hearts and minds of at least one or two boxing fans.

After taking in Sanders and Bloomberg sparring, Klobuchar quipped that there’s “a boxing rematch in Vegas on Saturday and these guys should go down there.”

The only people who have a right to be surprised that Arum might back Trump over Bernie, or that he’d welcome 45 to the fight of year don’t know boxing, and don’t understand politics.