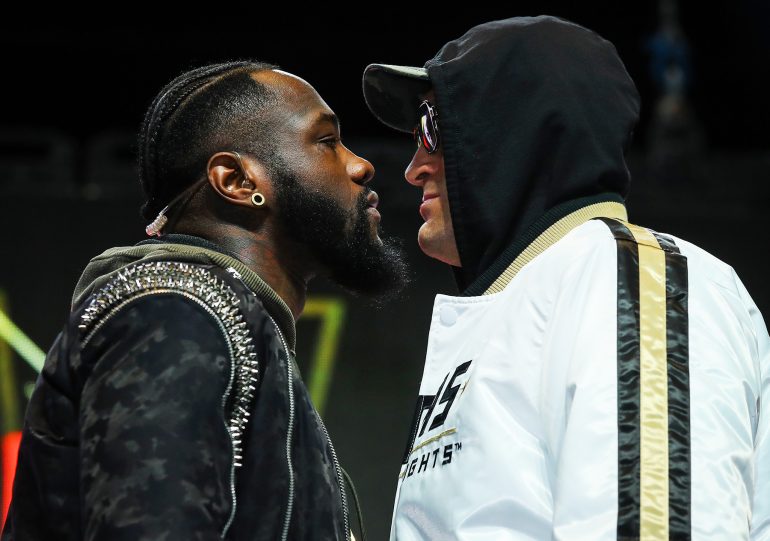 LAS VEGAS — The face-off will have to wait until Saturday.

Following a tense final pre-fight news conference inside the MGM Grand Garden Arena on Wednesday, where WBC titleholder and lineal heavyweight champion Tyson Fury will fight Saturday night (ESPN-Fox PPV, 9 p.m. ET), in a much-anticipated sequel, the Nevada State Athletic Commission decided to bar both fighters from participating in the traditional face-off at the weigh-in Friday.

“The reason the decision was made, on behalf of the commission, is because the press conference [Wednesday] spoke for itself,” NSAC executive director Bob Bennett told ESPN on Thursday.

Wilder and Fury are scheduled to weigh in at 6 p.m. ET.

Fury and Wilder wasted no time in confronting one another on stage, and their dust-up quickly evolved into pushing and shoving, forcing security personnel to intervene.

“The actions of the two fighters pushing each other, which was not staged, is not indicative of the image of our sport as a major league sport, thus having a face-off is not in the best interest in the health and safety of the fighters, the public, and the event,” Bennett continued.

It was a rather unusual decision, but Bennett went on to explain that it was too much of a risk to what could potentially be boxing’s biggest fight of 2020.

“If this fight depends on a face-off to sell it, we have not done our job,” Arum told ESPN. “They will take pictures, just no face-off. This commission realizes because of ESPN and Fox that boxing is back as a major sport, and we’re not going to f— it up by having these guys push each other or fight each other at a weigh-in.”

Wilder (40-0-1, 39 knockouts) and Fury (27-0-1, 19 KOs) fought to a split draw in a classic heavyweight title fight on Dec. 1 at the Staples Center in Los Angeles. Fury outboxed Wilder for most of the fight, but Wilder scored two knockdowns, one in the ninth round, and a massive one in the 12th round.