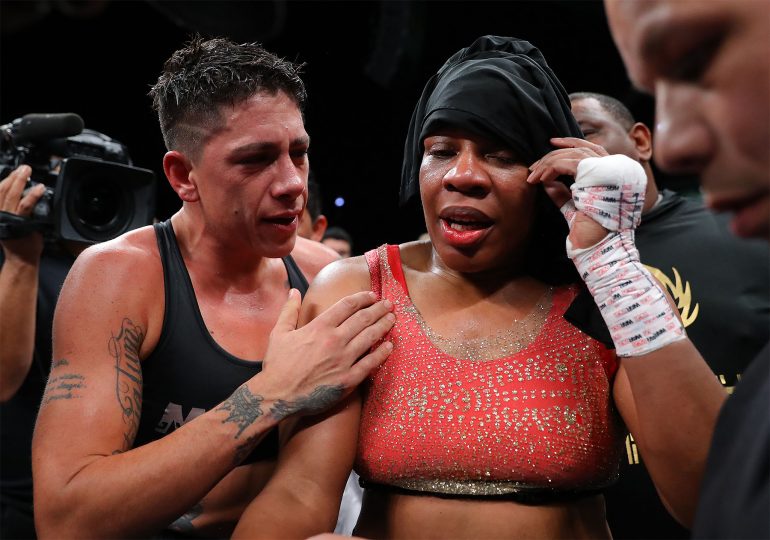 Alejandra Jimenez’s “B-sample” has also come back positive for a banned substance, confirming the “A-sample” result from her fight against Franchon Crews-Dezurn on Jan. 11.

The fight, which took place on the Jaime Munguia-Gary O’Sullivan undercard at the Alamodome in San Antonio, Tex., originally ended in a split decision win for Jimenez, 32, of Mexico City. Both of Crews Dezurn’s WBC and WBO super middleweight titles had been at stake.

The results of Jimenez’s test, which showed an adverse finding for stanozolol, an anabolic steroid, weren’t announced until Jan. 24, and by Feb. 10, the Texas Department of Licensing and Regulation (TDLR), which oversees boxing in Texas, had changed the fight result to a no-decision. 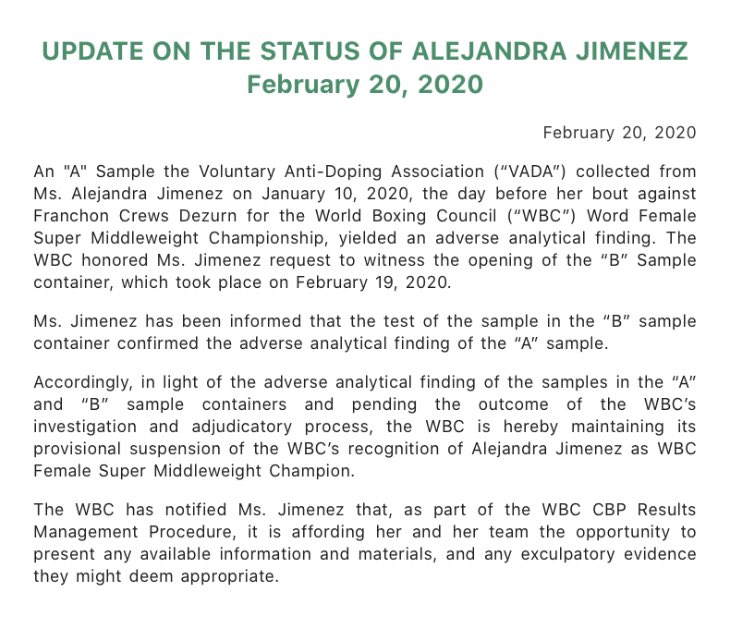 The A-sample had been collected on Jan. 10, the day of the weigh-in. The B-sample was tested on Wednesday, Feb. 19, and the results were made public on Thursday.

“In light of the adverse analytical finding of the samples in the ‘A’ and ‘B’ sample containers and pending the outcome of the WBC’s investigation and adjudicatory process, the WBC is hereby maintaining its provisional suspension of the WBC’s recognition of Alejandra Jimenez as WBC Female Super Middleweight Champion,” reads a WBC press release.

Jimenez (12-0-1, 9 knockouts) had maintained her innocence throughout the process, and even retweeted one supporter who appeared to mock Crews-Dezurn (6-1, 2 KOs), referencing an incident in the fight when her wig was removed during the fight.

Thank you @Claressashields. I just pray for all of the clean athletes out there this never happens to them. My life my career my mental health will never be the same. ? Thank the most high for the fighter in me https://t.co/zNi5rM6jUr

Claressa Shields, the American star whom Jimenez appeared to be on course to face, reacted to the news shortly after.

“[Crews-Dezurn] needs to be awarded back her titles and that loss taken off her record because ALEJANDRA JIMENEZ CHEATED!,” tweeted Shields, who defeated Crews-Dezurn in their pro debuts in 2016.

“I just pray for all of the clean athletes out there this never happens to them,” wrote back Crews-Dezurn in response. “My life my career my mental health will never be the same.”

Asked if her status as world champion at 168 pounds with the WBO and WBC will be restored, Crews-Dezurn responded: “When they make an announcement we will all know. I just focus on moving forward.”

A request for comment from Jimenez was not responded to by the time of this story’s publication.