Lightweight prospect Ruben Torres fights on in memory of his grandmother 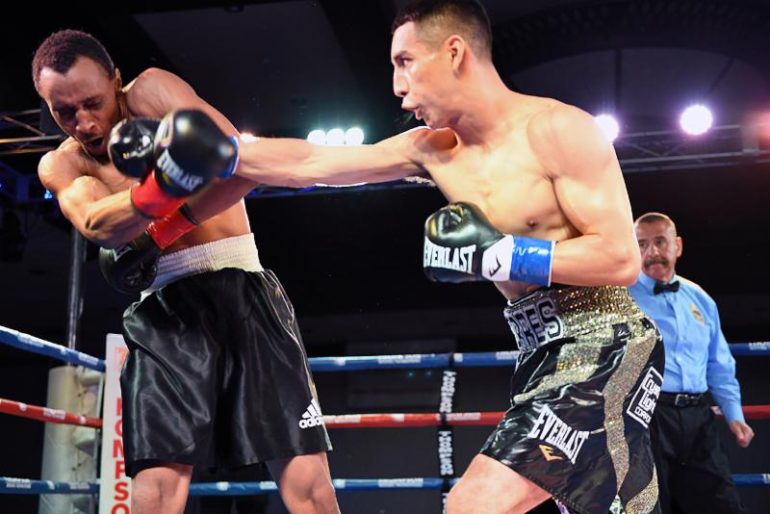 Lightweight Ruben Torres is committed towards the goal of becoming a world titleholder. He is also committed to getting an education and keeping the memory of his grandmother true to his heart.

The unbeaten Torres will return to the ring against Gabino Cota Friday night at the Doubletree Hotel in Ontario, California. The eight-round bout will stream live on Thompson Boxing Promotions’ Facebook page and on ThompsonBoxing.com.

Torres (11-0, 9 knockouts), who resides in nearby South Central Los Angeles, has been touted as a solid prospect by boxing insiders and is one of Thompson Boxing’s top young fighters.

In his last bout on Nov. 22, Torres knocked out Eduardo Rodriguez in the opening round. In his previous fight on July 26, the 22-year-old stopped gatekeeper Ruben Tamayo in round 2.

Both fights took place in Ontario.

On paper, Torres will be matched tougher against Cota (19-10-2, 17 KOs), who resides in Navajoa, Mexico. The 26-year-old is winless in his last five bouts, but he has faced solid opposition, including a draw against once-beaten Hairon Socarras. Cota has twice lost to former world title challenger Orlando Cruz and to fringe contender Toka Kahn Clary.

Torres will have family and friends cheering him on Friday night at the Doubletree Hotel, where he hopes to follow in the footsteps from the likes of Timothy Bradley, Mauricio Herrera, Josesito Lopez, and Yonnhy Perez, just to name a few. His fight against Cota will mark his 10th at the venue.

“I love the energy when I fight at the Doubletree Hotel, everyone is right on top of you,” said Torres in a recent release. “I can see and hear everyone in the building and it’s not far from downtown LA, where a lot of my family is from, so it’s nice that they can all come see me. It’s a lot of fun and electrifying to say the least.”

One family member who will not be cheering Torres on Friday night will be his grandmother, who passed away unexpectedly late last year. Torres misses her presence, but will fight on.

“My grandmother was dear to my heart and I will always keep her in my memory, everything happened so fast when she passed away out of nowhere. She was my number one fan and I miss her like crazy; I’m still trying to deal with her not being here and I can’t really put it into words, but I know she’s in a better place.”

“I will always have her spirit with me when I step into the ring and I know she’s watching over me. I’m going to continue this journey to a world title with her in my mind, I want to make her proud.”

Torres trains at a recreational center in the Los Angeles suburb of Santa Fe Springs. He also trains alongside lightweight prospect Michael Dutchover, where he gets quality sparring as well.

He is dedicated to his craft in the gym, but he is now dedicated to completing his college education. It was a condition he had to agree to with trainer and manager Danny Zamora, where he would have a solid foundation to fall back on after his boxing career is over.

Torres is not only grateful that Zamora manages his career, but receiving an education adds an added element of discipline in the gym to continue his pro career.

“My manager and trainer, Danny Zamora, has been a big influence in my life. After going to school for a few years, I dropped out to pursue my boxing career. When I came back to the Santa Fe Springs gym, Danny told me that he wouldn’t train me unless I continue to attend college. Right now, I’m taking courses at Cerritos (Junior) College as advised by Zamora and I’m thankful to him for always looking out for my best interest.”

In the co-feature, bantamweight prospect Saul Sanchez (12-1, 7 KOs) of Pacoima, California will square off against Victor Trejo Garcia (17-11-2, 8 KOs) of Mexico in an eight-round bout. Sanchez is hoping to bounce back after suffering the first loss of his career to Edwin Rodriguez in his last bout on Aug. 23.

Three more fights round out the Thompson Boxing card.