Deontay Wilder is better prepared this time around for Tyson Fury 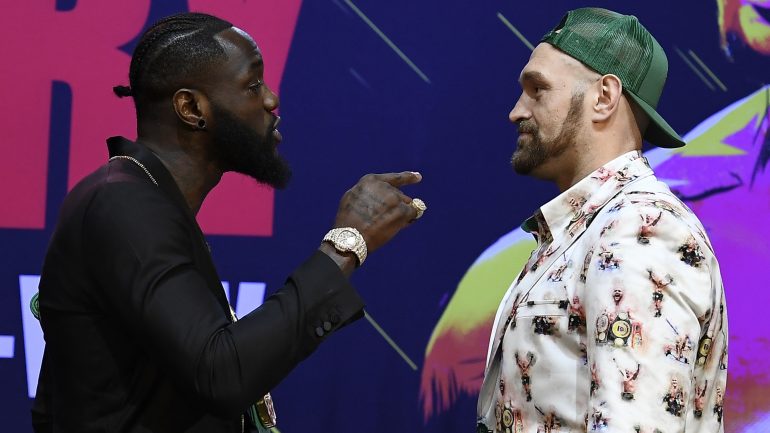 What that can translate to when Wilder, the WBC heavyweight titlist who is defending the belt for the 11th time, takes on Tyson Fury in their rematch on Saturday (9 p.m. ET/6 p.m. PT) at the MGM Grand Garden Arena, in Las Vegas, Nevada (FOX & ESPN+PPV) is anyone’s guess.

“I’m going to knock his ass out,” Wilder said. “I knocked him out the first time. I just didn’t have enough time to finish him. And I know what he’s saying, how he’s going to knock me out in the two rounds. Keep dreaming. That’s all talk. Do you really think he’s going to come after me, after what I did to him the last time?

“I don’t think that’s what their plans are. I don’t know what is true or what isn’t. I know one thing: That I’m prepared for anything that he brings. And whatever he brings, I can handle. He can’t hurt me. I know I can hurt him. So, if he wants to bring the fight, then come on, let’s make it happen. That’s fine with me. Let’s fight fire with fire. I have the greater fire. So I hope they stick with that game plan and follow through with it. I’m looking forward to it.

“If he does that, it’s going to make the fight easier for me. So we’ll see what happens. I think he’s nervous. No, I know he’s nervous. Deep down in his heart, he’s nervous. I really feel that he’s very, very nervous from the first fight. When you hurt someone the way I hurt him, knock him down, give him a concussion, you don’t forget that. You never forget who beat you like that.”

“I wasn’t sleeping and I didn’t eat the way I should have before the first fight,” Wilder admitted. “I got so caught up in trying to knock him out and look good that I forget to do a lot of little things I usually do in the ring. This time around, I promise, I’m going into this more mentally and physically ready.

“I went to the Super Bowl (a few weeks ago) and I was right back on a plane getting back to work. I won’t underestimate (Fury) this time around. In that first fight I was probably 50% or less coming into that fight. It’s why I didn’t fight like I normally fight. There were a lot of things that I normally do that I didn’t do. It’s just one of those things that you know why you did it wrong. I rushed. I wasn’t patient enough. I moved forward holding my guard high swinging with no hope, just doing certain things because in this fight I wanted so hard to impress everybody.

“I got too caught up in that.

“Like when he says he’s going to come in at around (270 pounds. Fury weighed 256½ in the first fight. He dropped to 254½ against Otto Wallin in Sept. 2019). That’s great. It means I’ll have more to hit. Otherwise, I could care less. I just don’t want him using any excuses when I knock his ass out.

“Think about it. It took me some time to figuring him out. Once I did, he was out. It’s not going to take me nine rounds to figure out (Fury) this time around.”