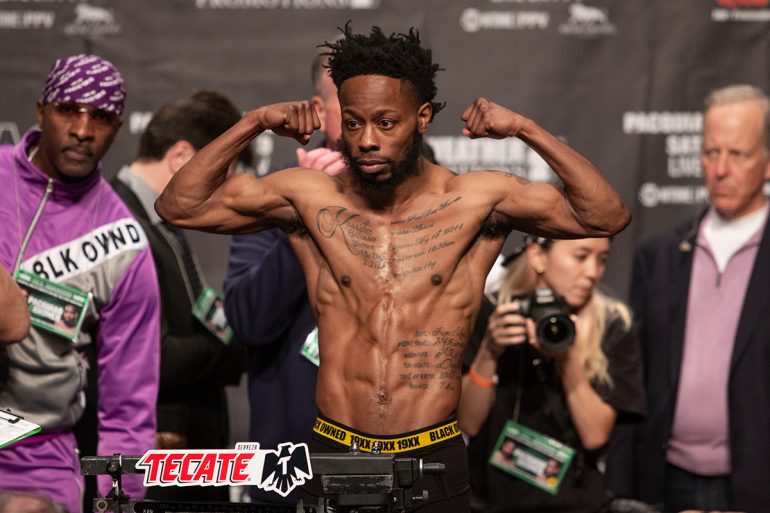 NASHVILLE – Despite a dominating performance on Saturday, Rau’shee Warren admits he had to change his strategy at the midway point of his bout against Gilberto Mendoza.

Warren battered Mendoza throughout their 10-round affair at Bridgestone Arena in Nashville, Tennessee. But in the fourth round, it appeared that Warren (17-3, 4 knockouts), 33, of Cincinnati, Ohio, was on his way to a rare stoppage win. An accidental clash of heads opened up a horrendous cut on Mendoza’s forehead, and the former bantamweight world titleholder threw everything he could at his opponent. But Mendoza just kept coming.

“To be honest, I was going for the knockout (in the fourth round),” Warren told The Ring. “He was taking a lot of shots – I was trying to hit him with the refrigerator, the kitchen sink – everything, but then I was like, ‘This is going to take all night,’ so I had to switch it up.”

Mendoza (15-8-3, 7 KO’s), 30, a Mexico native training out of Modesto, California, who was fighting for the seventh time in 12 months, earned Warren’s respect.

“He’s a very tough opponent,” he continued. “I tip my hat off to him because it takes a lot just to get in [the ring]. He kept coming forward and he put up a fight.”

When asked if he would be willing to face the winner of the three-belt bantamweight unification bout on April 25 between Naoya Inoue and John Riel Casimero, Warren said he wants to fight for a world title by the end of this year, but it won’t be against the winner of Inoue-Casimero.

Rigondeaux (20-1, 13 KO’s), 39, who defected to the U.S. from Cuba and resides in Miami, a former unified junior featherweight champion, won a secondary 118-pound title on February 8 in Allentown, Pennsylvania when he outpointed former unified junior bantamweight titleholder Liborio Solis.