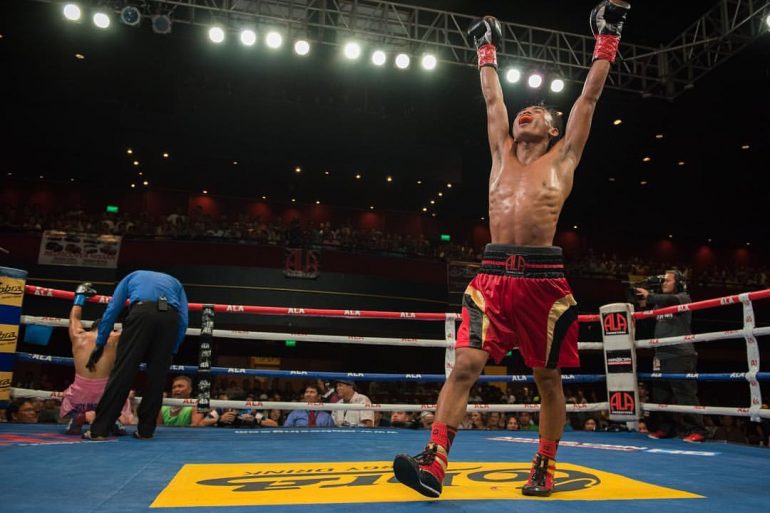 Jeo Santisima, seen after his come-from-behind knockout of Marco Demecillo in 2016, faces a big step-up in competition against Emanuel Navarrete. Photo by Arvee Eco
16
Feb
by Ryan Songalia

Losing your first fight is an inauspicious way to begin a pro career. For many, it could signal the end of their ambition, and resign them to a fate of being an “opponent.”

But Jeo Santisima never saw it that way, even after the way his night ended on August 24, 2013, when his first trip up the ring steps resulted in a unanimous decision loss to Roniel Parcon in the Philippine city of Escalante.

“I felt very discouraged when I got defeated on my first pro fight. But that made me train hard and to be where I am now,” said Santisima (19-2, 16 knockouts).

Where he is now is on the cusp of his first world title opportunity, when he faces WBO junior featherweight titleholder Emanuel Navarrete this Saturday on the undercard of the Deontay Wilder-Tyson Fury heavyweight championship rematch at the MGM Grand in Las Vegas. The fight will be the second on the four-fight broadcast, which will be carried in the United States by Fox Sports pay-per-view and ESPN+ pay-per-view

He’s come a long way since that first loss, and a second one the following year, which dropped him to 2-2. Since then, he has won 17 straight.

“I know I won those two losses,” said the 23-year-old Santisima, a two-fisted puncher with a strong left hook. “They were just hometown decisions, that’s why I didn’t lose hope in reaching my dream.”

Michael Aldeguer, the ALA Promotions president, didn’t lose faith, either. He remembers Santisima from when he first came to the ALA Gym in Cebu province back in 2012. When his older brother, Aldren, left the ALA Gym to attend college in their home province of Masbate, Jeo took his spot. Now he’s one of the gym’s rising stars, along with his three younger brothers, who also train there as amateurs.

“He lost in his debut but we saw he had raw power and heart that just needed refinement at the gym,” said Aldeguer. “And, as predicted, he improved over the years.”

That he’s fought his way back to title contention is indicative of his determination. Still, the gap between his current level of opposition and Navarrete (30-1, 26 KOs) is a canyon.

Santisima’s best wins have come against Rene Dacquel, in his most recent fight in December, and Marco Demecillo, in February of 2016. Both stoppage wins were against more experienced Filipino veterans, who at one point had been prospects in their own right, but were on the decline. The rest of his ascent came primarily against opponents from around the Southeast Asian region, with the exception of a first round KO of unbeaten but undersized Goodluck Mrema in 2017, and a a distance-going win over Mexico’s Uriel Lopez in 2018.

Navarrete, 25, of San Juan Zitlaltepec, Mexico, emerged onto the world stage in December of 2018, laying a serious beating on the undefeated Isaac Dogboe to win the belt, and then took it a step further in the rematch, using his nonstop pressure and mix of punching angles to stop the shorter Ghanaian in the final round six months later. He defended the title a total of four times in 2019, all by stoppage, with the most recent being a fourth round knockout of Francisco Horta in December.

Santisima hears the detractors who say he’s taking too big of a leap. It doesn’t bother him.

“That’s how they look at it, that I’m the underdog in this fight, because my opponent is experienced and big,” said Santisima. “But I’m not affected by the bashers. I’m using it for my inspiration to be tough when it comes to the fight.”

Santisima’s head trainer, Michael Domingo, believes that Santisima’s own pressure, and strong body punching, will be the key. Counterpunching as well, Santisima adds, noting that their opponent doesn’t often have to take a backwards step.

“Jeo has shown a lot of heart the past years but it will be different fighting in Vegas,” says Aldeguer, adding that “it will be up to him how he handles the situation.”

The team arrived in California from the Philippines last Thursday, and have been doing their running around Monterey, and doing some light gym work at the Wild Card Boxing Club. Santisima has just four more pounds to cut, and the team heads to Las Vegas on Monday, ahead of the promotion’s grand arrivals, set for Tuesday.

“I was so happy when I learned that I would be on the undercard of a famous heavyweight fight,” said Santisima, who is in the U.S. for the first time. He figures Wilder will get it done this time around.

Boxing had been the dream of his father Alex, a farmer who grew coconuts, corn and bananas to support his six children, all boys. Now it’s up to Jeo, the boy who first put on gloves at age 9, then had about 50 amateur fights before turning pro at 17. He may have lost his first fight, but of all the talented prospects on that card that night in Escalante, he’s the first to fight for a world title.

“This has been a dream of mine ever since I was a young boy,” said Santisima. “To fight for a world title and to be a world champion one day.”