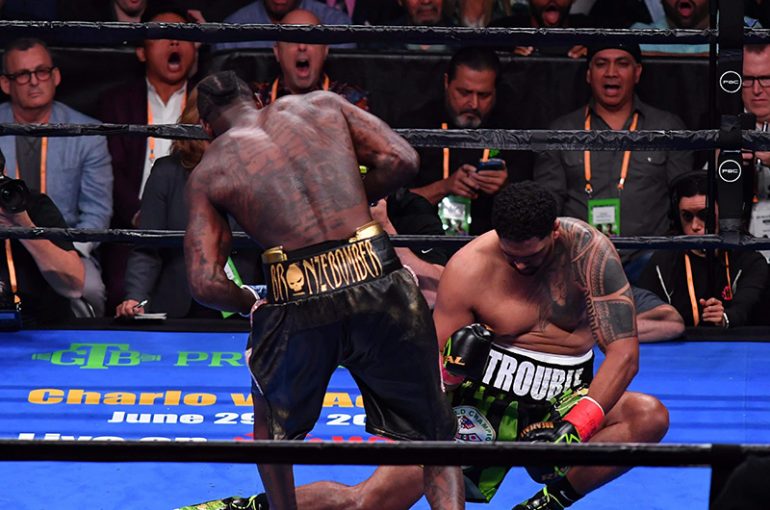 There goes "Trouble." Wilder prevented Breazeale from warming up by knocking him cold. Photo by Damon Gonzalez
18
Feb
by Don Stradley

(Editor’s note: This feature originally appeared in the March 2020 issue of Ring Magazine.)

Some day years after he has retired from boxing, Deontay Wilder will be sitting in the plush playroom of his Tuscaloosa mansion. Several big-screen TVs will be playing his greatest knockouts on a loop; his bronze mask and various costumes will be encased in glass behind him. As he playfully caresses a bronze cast of his famous right fist, he’ll take some questions from a local high school newspaper reporter, waxing nostalgic about the year 2019. “Oh yeah,” the “Bronze Bomber” will say. “That was when they started calling me the greatest puncher of all time. I don’t blame them for saying that. I’d just knocked out David Ortiz again.” The reporter will gently remind Wilder that it was Luis Ortiz, not David. “Yeah,” Wilder will say. “I knocked all their asses out.” At the end of the Q&A, Wilder might even put on the old mask for a quick photo shoot. It’ll be a nice interview. As the rookie reporter is escorted from the premises by Wilder’s butler, the retired titlist will sit back in his big leather chair and look up at the clip of him blasting out Dominic Breazeale. He’ll smile and think about the old days… 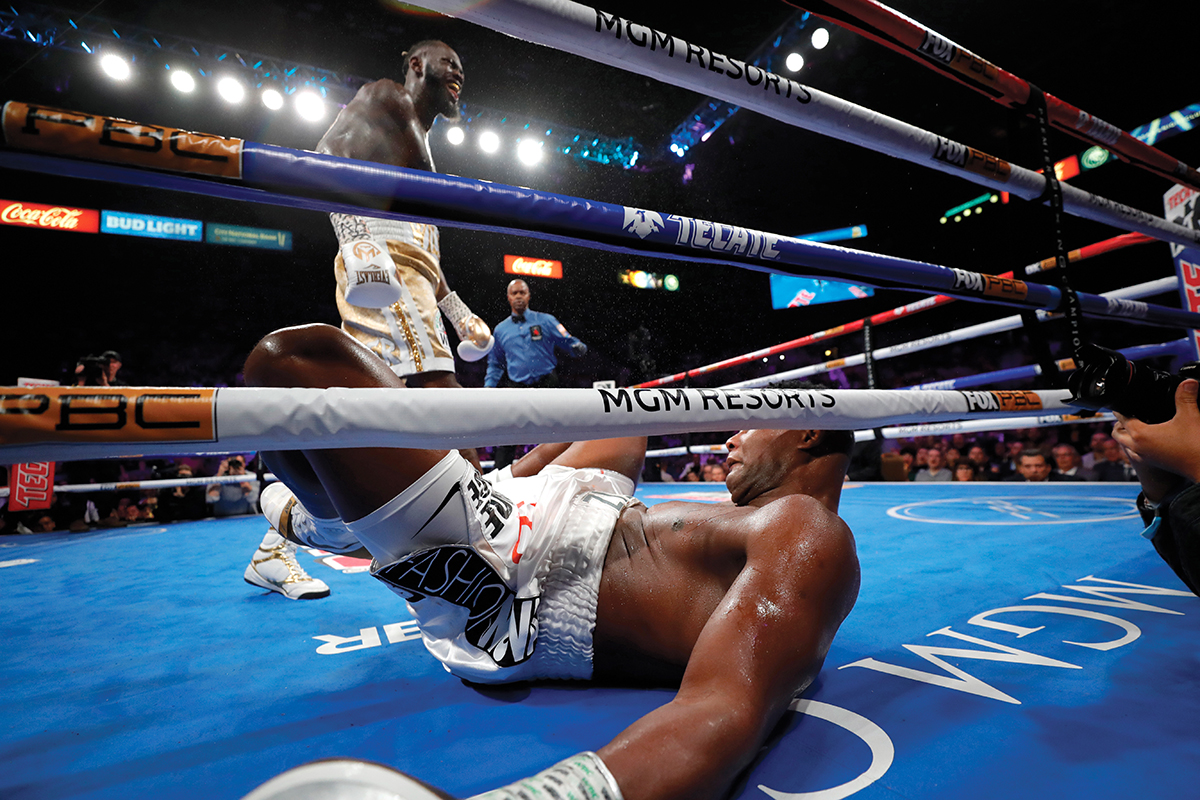 With his stunning knockout of Ortiz last November, a question rippled across the boxing landscape: Is Wilder the greatest heavyweight puncher in history? Granted, for a good portion of the folks trumpeting Wilder, history doesn’t go back farther than, say, the Obama administration. Then again, with 41 knockouts in 43 bouts, his boosters are entitled to be excited. Wilder is especially intriguing because it’s been quite a few years since we’ve had a legitimately scary heavyweight hitter. Sure, Samuel Peter, Lamon Brewster, and David Tua were all big punchers, but they didn’t become major stars. Long-reigning champion Wladimir Klitschko had a strong right hand but too often seemed hesitant to use it. That’s why Wilder is refreshing. You will never hear trainers Jay Deas or Mark Breland begging Wilder to throw his right hand. Rest assured, he will throw it. He will throw it hard.

Wilder also fascinates because we can’t quite figure out how he does it, and he never seems to do it the same way twice. Sometimes he throws roundhouse punches that seem lifted from old Popeye cartoons. At other times, he’ll throw a textbook right cross down the middle. Naturally, self-described boxing gurus will try to explain the science and technique of Wilder’s punching. They’ll talk nonstop about his height and leverage and torque. While such explanations are mildly amusing, the real trick to Wilder’s power might be the element of surprise. He does things in such an unorthodox way that opponents don’t really know what’s coming. When fighting Wilder, it’s as if his punches fall out of the sky like meteors.

But rather than trying to solve the riddle of Wilder’s power, we should be happy that he exists. The sport honors all kinds of fighters, but nothing drives the business like a heavyweight knockout artist. Whether or not Wilder is the best ever, he’s in some outstanding company.

Perhaps the most devastating puncher of the early days of gloved boxing was Bob Fitzsimmons, who was no more than a rangy middleweight but was perfectly comfortable fighting men who outweighed him by 25 pounds or more. He won the heavyweight championship in 1897 from James J. Corbett with the infamous “solar plexus punch,” but his best weapon was a screaming overhand right that helped him score 57 victories inside the distance. Perhaps his most brutal knockout came on August 10, 1900, in a sweltering Madison Square Garden. On that night, Fitzsimmons scored an astonishing sixth-round stoppage of Gus Ruhlin, “The Akron Giant.” Ruhlin took a right to the jaw and fell face-first, as the Buffalo Courier described, “as if struck by an axe.” According to old ringside reports, Ruhlin needed several minutes to regain consciousness and an additional four hours at a nearby bathhouse before he fully recovered.

Fitzsimmons’ record is filled with similar stories of opponents being knocked cold. For years, old-time fight experts would declare the likes of Jack Dempsey and Joe Louis couldn’t compare to Fitz because they didn’t knock men into comas. However, the dark side of Fitzsimmons’ legacy is that he fought when there were no specific rules about how hands could be wrapped. In his day, fighters tried soaking wraps in a mixture of alcohol and gum, wrapping a fist with insulation tape and experiments with plaster, among many other things. Indeed, men who worked in Fitzsimmons’ camp came forward in later years and told reporters that “Ruby Robert” was quite devious with his wraps. A 1904 story in the Salt Lake Telegram quoted a “well-known handler of boxers” who claimed Fitzsimmons would “put moistened plaster of paris on his linen bandages and let the mass grow hard. Then he would have a rocky ridge across his hand that could be felt straight through the glove.” Jim Jeffries, who twice defeated him, swore that Fitzsimmons’ punches were unusually painful, almost inhuman.

Loaded-glove rumors followed Dempsey for much of his life, which was a testament to his own wicked punch. In his early career, he endured his share of losses, draws and no-decision bouts, but in 1918 Dempsey came into his own as a knockout puncher, scoring 17 KOs in 21 bouts. After his demolition of Jess Willard for the championship in 1919, Dempsey became an American phenomenon. He went Hollywood a few years into his reign, but for many generations to come he represented the ultimate in punching. He did most of his damage with a left hook.

Many Depression-era boxing fans predicted Max Baer would be the next Dempsey. Getting hit by Baer, to paraphrase one of his knockout victims, was like having a house fall on you. Baer never quite lived up to the initial hype, but 51 of his 66 career wins were knockouts. Most came courtesy of a right hand that was like a wrecking ball.

Joe Louis was the heavyweight champion for nearly 12 years, thanks to his punch. Fans of the period would debate ad nauseam whether Louis hit harder than Dempsey. In 2003, Louis was selected as Ring Magazine’s best puncher in our 100 Greatest Punchers of All Time issue while Dempsey was rated at No. 7, so apparently that old argument has been settled. The late trainer Eddie Futch, who had been Louis’ sparring partner, once explained that merely sparring with Louis could be perilous: “Even if he didn’t hit you much, just blocking those shots was like being in an automobile accident.” Louis was vicious with either hand and specialized in short, quick punches. “If he hit you with a shot, you never saw the punch coming. You just saw a light in your head. Like a camera flash going off. Bang.”

And so it went for most of the previous century, with each generation getting its own heavyweight knockout king. There was Rocky Marciano in the 1950s, scuttling forward like a crab to land his haymakers. Then came Sonny Liston, a brutal puncher who could knock men down with his jab. The early 1970s saw George Foreman take his crude power all the way to the championship. Even during the second phase of his career, when he seemed to be in the business for laughs, Foreman could still crack. When he regained the championship at age 45 with his knockout of Michael Moorer in 1994, the left-right combination that ended the fight was not too different from the way Wilder stopped Ortiz recently. It may look a bit different because Wilder and Foreman have such dissimilar physiques, but the principle was the same: a quick left to blind the opponent followed immediately by a stiff right.

Earnie Shavers had frightening power, but he never had the chin or stamina to go with it. He was KO’d seven times himself. One of his conquerors was Ron Lyle, an inconsistent performer who also wielded a major punch. Lyle’s 1976 bout with Foreman was a classic display of bombs-away punching, with both men on the canvas twice before Big George won by KO in the fifth. The 1970s was simply a golden era for heavyweight sluggers, with highlight-reel KOs coming on a regular basis.

Of course, the generation that grew up watching Mike Tyson in the 1980s will always consider him the biggest banger of all. But as his career wore on, his power seemed to dissipate; he couldn’t even hurt Lennox Lewis, who wasn’t known for having a granite chin. Then again, a conversation about great heavyweight punchers could also include Lewis. He was such a clever boxer that we sometimes forget the many impressive knockouts on his record, none more devastating than his 2001 stoppage of Hasim Rahman to regain the championship. The right hand that ended Rahman’s reign was as good as it gets.

Whether Wilder is history’s greatest heavyweight puncher is a hot topic for the moment. The way boxing fans are, if he fails to score a knockout in his next bout, they’ll be leaping off the bandwagon pretty quickly. In the meantime, Wilder has plenty of supporters who will argue in his favor. The problem is that their reasoning relies too heavily on his knockout percentage, which currently stands at a whopping 95.35 percent. That’s a hell of a number, but KO percentages are misleading. Vitali Klitschko carried a similar ratio for most of his career and retired in 2012 with a percentage of 87.23 over 45 fights. Vitali scored plenty of stoppages, but with his style of wearing opponents down over several rounds you couldn’t describe him as a one-punch destroyer. Liston, as fearsome as any puncher, had a rather modest KO percentage of 72.22 percent over 54 fights. If a fighter’s knockout percentage meant anything, we’d be hailing Vitali Klitschko as a great knockout artist ahead of Liston, Louis and others who were obviously harder punchers but had lower KO ratios.

Where Wilder shines is in the absolute finality of his knockout victories. He doesn’t wear opponents down. He practically knocks them through the canvas. And sometimes he loses almost every round before landing the big one. “I’ve said it so often: These guys I’m fighting, they have to be perfect for 12 rounds, but I only have to be perfect for two seconds,” Wilder said after stopping Ortiz. The fact that he is doing his knockout business in the modern era of supersized heavyweights is also interesting. He’s knocking out some huge men. And like Fitzsimmons, Dempsey, Louis and Marciano, Wilder is actually lighter than most of his opponents.

Even Wilder seems mystified by his ability to knock men into a stupor. He has credited God, some mysterious factor that he was blessed with at birth and even his use of positive thinking to harness the power of the universe. The way some of his rivals look when they fall, it definitely seems Wilder has the entire universe in his gloves.

Whether Wilder is really the best heavyweight puncher in history is impossible to know. But he is certainly comparable to the greats of the past in one way: When he enters the ring, we hold our breath as if waiting for some sort of explosion. Besides, just the fact that he’s being considered the best is rather amazing. It sure beats some of the other things being said about him. When he’s retired, will he also remember that a certain number of fans thought he lacked fundamentals, fought weak opposition and wouldn’t last five rounds with Tim Witherspoon? Then again, the mansion in Tuscaloosa will make it easy to forget his critics.