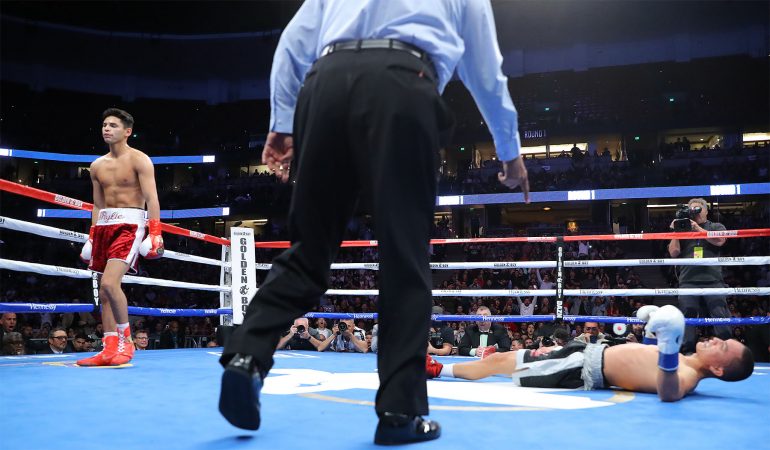 With a perfectly-timed counter left hand to the jaw of Francisco Fonseca, Garcia delivered a cold-blooded one-punch knockout in the first round and jolted a crowd of 10,310 at the Honda Center on Friday night.

“I saw the left hook, it was there,” Garcia explained immediately afterward on the DAZN broadcast. “It’s a perfect left hook.”

Garcia (20-0, 17 KOs) couldn’t have done it any better against a Nicaraguan opponent who has proven his mettle in the past. Fonseca (25-3-2, 19 KOs) got caught as he was throwing a right hand of his own, and after being sent backward to the mat from the shot, his head bounced off the canvas hard. Referee Raul Caiz Sr. recognized that immediately and waved off the bout without even hesitating to give him a count. Fonseca was out cold and wouldn’t come to his senses until a moments later. The lightweight contest was scheduled for 12 rounds.

“I felt too comfortable in there,” Garcia said in his locker room afterward. “There was literally nothing he could do to even come close to doing anything to me. I let him feel comfortable for a second, baited him in, and BOP, he was out.”

Garcia made a big statement with the knockout win, and it comes off another first-round KO last November when he undressed Romero Duno. According to Garcia, 2020 will be his breakout year and one that begins his legacy. In the co-feature of the Golden Boy Promotions undercard, Venezuela’s Jorge Linares had a great performance of his own by knocking out Carlos Morales in the fourth round, and it wouldn’t take a genius to figure they would soon meet.

“I watched the whole thing,” Garcia said about Linares’ win. “He’s a good fighter and explosive. Not the same fighter, but easy to hit. I will hit him. He’s not going to set me up — that s_t aint gonna work. He was getting touched up a little bit and he set him up nice, but he’s not going to be able to do that with me. I’m on that. I’ve already dealt with that from sparring, so I’m about to counter that.

“I would like to fight Linares at the Staples Center like Oscar said, or even on Canelo’s undercard. I’m ready to turn up there too.”

With Bernard Hopkins speaking his praises next to him in a crowded locker room with several celebrities there to see Garcia, there was an aura of invincibility that protruded as the 21-year-old talked about what’s in store for his future. Linares was just going to be the first step of a year he had already planned out with England’s Luke Campbell and Baltimore’s Gervonta Davis next on his radar in that order.

Meanwhile, amid all the hoopla, quietly off to the side was a big catalyst to Garcia’s recent success. Trainer Eddy Reynoso explained to RingTV.com that the knockout was in fact something they trained on for this particular matchup.

“What I saw from Ryan today is that he did what we trained for in the gym,” Reynoso said motioning the KO sequence. “To get (Fonseca) when he was coming in and get him (with the left hand).”

Reynoso has nurtured Garcia from prospect to contender in just their fourth fight together, and any observer outside of Garcia’s camp would tell you the fast-handed boxer-puncher has improved in leaps and bounds since. But there was still a serious tone from Reynoso with the latest win out of the way, which was in contrast to the glowing enthusiasm elsewhere in the locker room and in the arena on Valentine’s Day.

“He has a mentor in Canelo, who keeps himself grounded,” Reynoso said when asked how important it is to keep Garcia level-headed. “It’s our responsibility because we have more experience and we have to teach him those things with the success to keep yourself grounded.”