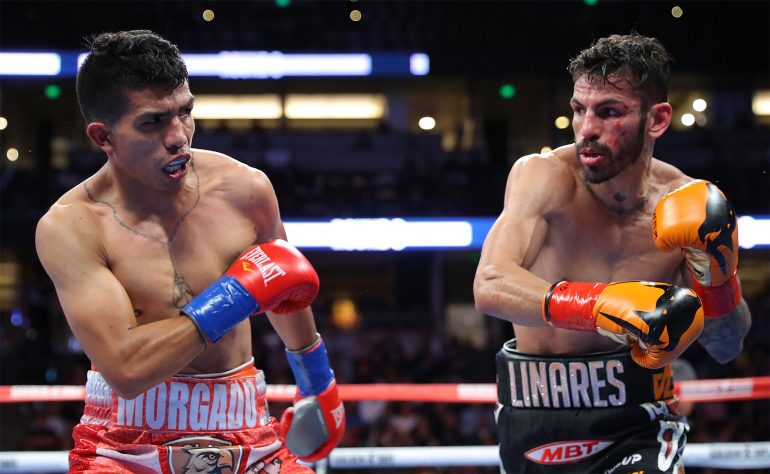 ANAHEIM, California – Jorge Linares further distanced himself from a shocking first-round KO loss to Pablo Cano last January and advanced closer to a high-profile crossroads showdown with Ryan Garcia by stopping normally durable spoiler Carlos Morales in the fourth-round of their co-feature to the Garcia-Fonseca bout on Friday at the Honda Center. 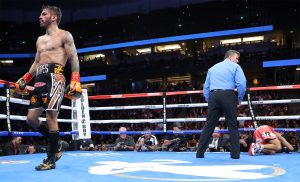 Linares (47-5, 29 KOs), a three-division titleholder and former Ring Magazine lightweight champ, boxed well from the onset of the DAZN-streamed bout despite suffering a cut by his left eye from an accidental headbutt in the opening round. The 34-year-old Japan-based Venezuelan dropped Morales face-down to the canvas with a jab-to-the-body-short-right-to-jaw combination during an exchange near the end of Round 3. Morales (19-5-4, 8 KOs), a 30-year-old L.A.-based technician who had never been stopped as a pro, was dropped with the same well-timed combination with a just under a minute left in Round 4. Referee Thomas Taylor waved the bout off at 2:09 of the round.

The stoppage was statement for Linares, who many hardcore fans had written off following the loss to Cano, despite the fact that he dropped Vasiliy Lomachenko en route to their competitive lightweight championship bout in May 2018. His speed, ring savvy, footwork and experience should provide a stern test for Garcia, who was troubled by Morales during a majority decision victory in September 2018. Morales was also competitive in decision losses to former and current 130-pound beltholders Alberto Machado and Rene Alvarado.

However, he was outclassed by Linares.