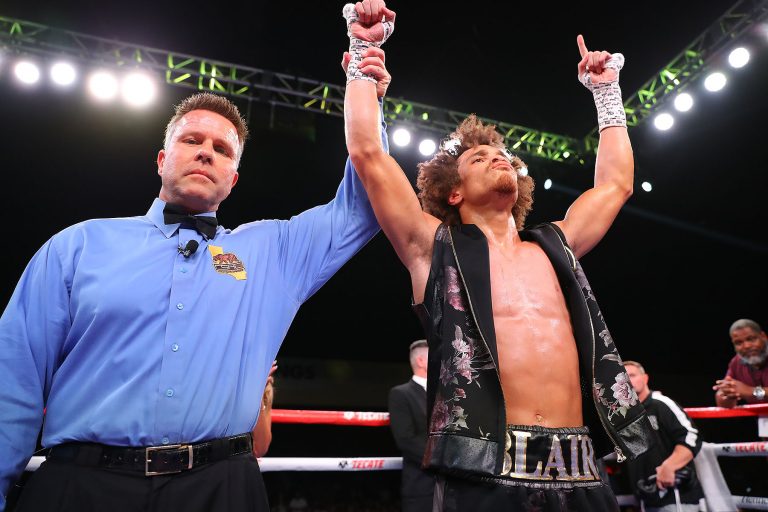 ANAHEIM — Blair “The Flair” Cobbs kept his record perfect after receiving a split-decision (two socres of 96-93 for Cobbs, one tally of 94-95 for Kotey) win over Samuel Kotey on Friday night, but it wasn’t in the glamorous fashion that precedes the welterweight from Philadelphia, Pennsylvania.

Cobbs (14-0-1, 9 KOs) got a great reception from a crowd that ate up his pro wrestler type attitude as he made his entrance. They even offered their own ‘woos’ in the opening round as they sought a memorable moment to go along with Cobbs’ attractive personality. By round three, the crowd turned on the 30-year-old as he boxed from the outside and basically controlled the fight with his feet.

After five rounds, Cobbs momentarily calmed the boos while doing a little dance in his corner. It led to real cheers as the two squared off for the best action round of the fight in the sixth. Cobbs started it by letting his hands go and Kotey responded well enough to make it a competitive span of three minutes that solicited a genuine reaction. The trading of leather wouldn’t last past that, however, as Cobbs went back to utilizing his jab from the outside and skirted the ring to easily outbox his limited opponent.

Kotey (23-3, 16 KOs) had no jab to go along with a right hand that remained cocked and ready to fire whenever possible. A few shots here and there would land on Cobbs, but while it never lived up to its intent, it was enough to keep Cobbs wary. Had the 36-year-old Ghanaian cut off the ring effectively, then maybe Cobbs would’ve found himself in some trouble, but Kotey tried the best he could to conjure Cobbs into a fire fight, and the crowd recognized him for that effort by fight’s end.

Cobbs certainly earned the win despite an underwhelming performance that surprisingly ended in a split-decision, but his body work strayed low in round nine to warrant a point deduction from referee Jerry Cantu and partly tells some of the official result’s story. Overall, Cobbs still displayed a solid jab, great athleticism, and a good body attack that highlight a prospect going through his trails and tribulations. It was a step after all considering it was the first time Cobbs went a full ten rounds. Winning the crowd over was another thing — especially because Cobbs had them in his back pocket in the lead up — but the affable young man took it in stride knowing this wasn’t a night that will ultimately define him.

“I’m practicing and getting better every time out,” Cobbs said. “It was a really good performance as far as boxing technique. I’m ready for any fight. Any.

“Give me the boos baby!”