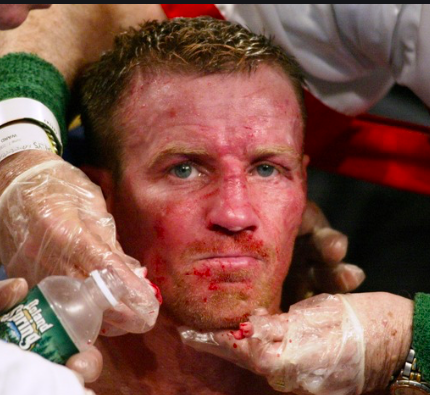 While he fought, Micky Ward did not pause to ponder what the longer term affects might be, as he threw punches and absorbed punches from foes like Charles Murray, Zab Judah and Arturo Gatti.

Ward, the fighting pride of Lowell, Mass. did the violent waltz with a man cut from a similar cloth, Gatti, three times. The first one was fight of the year in 2002.

Ward got the majority decision on May 18, in CT, and him and Arturo were responsible for bringing more new eyeballs to the sport, arguably, than any other pugilist or contest, in the preceding or post-ceding ten years. Ward dropped the next two (11-23-02, 6-7-03), and waved a fond adios to the sweet science after the June 2003 L.

Indeed, the Massachusetts native landed punches, including the signature left hook to the liver, worse for your internals than Jack Daniels…and yep, he ate them too. Ward wasn’t a “skills pay the bills” guy, which is why his legacy will be more eternal than guys who invested more in the “don’t be hit” side of the ring generalship equation. But legacy is a strange thing, in this boxing realm. That fighting style which will earn Ward fights more YouTube hits than maybe an Andre Ward-type might enjoy means Ward is a living legend in Lowell, Mass. and in the New England area…but there is a downside.

Ward, age 54, experiences headaches several times every week which are nastier than anything Gatti tossed at him.

Micky told me he wasn’t thinking about being “entertaining” while in some of those trade fests, with Gatti, with Reggie Green. “I was just thinking about trying to land the next punch, or trying not to get hit,” he told TALKBOX listeners. 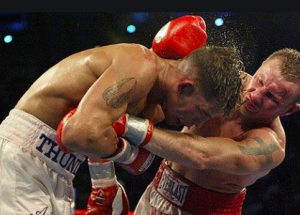 And no, he wasn’t thinking about the effects of brain trauma while doing battle. “No, I never thought about it back then,” he said. He hung up the mitts in 2003, and he was diagnosed in 2006, or so. “I never had headaches, really, after my fights. Now, I get them so bad.” The neausea is horrible, he shared. “A good day is waking up without one.”

The aching head will wake him up in the middle of the night, and he will take Excedrin Migraine. Three to five days a week, the headaches come. “Nothing takes it completely away,” the 38-13 hitter admitted.

After the bouts, a doc would ask how ya feeling, and the pride would kick in. “I’m good,” he’d said. “I shoulda told them I was hurtin.”’

Mick doing charity work for his guy Mark Wahlberg in September 2019. The brave ex pug smiles, and isn’t one to ever bemoan his fate, because he still loves boxing.

Does Ward have a message for the young fighters? “You gotta be honest, you gotta be open and tell someone, cornerman, trainer, your doctor,” he said. “Because I wouldn’t want anyone to feel the way my head does some days.”

The ex fighter said that ideally, he wants it so kids aren’t taking whacks to the head too early. “I think boxing is the best sport there is…but competitively, to be getting hit, I don’t think it’s a good idea before they’re 14,” he said, and then, showing that good guy persona, he apologized for it, saying that is just his take.

No, I told him, we should all listen to someone like you, and please, no apologies for that.

He hasn’t heard of any inroads in treatment, they have told him to stay hydrated.

NOTE: Any neuro experts who have the latest intel, on what treatments might be available to help Mickey with those headaches, please email me (Figh[email protected]) and I will pass on the info.

Ward also shared that he will be donating his brain to science when he passes on, so that researchers at BU can gain more insights into how and why CTE afflicts certain folks, and not others. He also plugged the Concussion Legacy Foundation, noting that those people are working hard so the next generation of boxers don’t have to combat the effects from head trauma to the same degree.

My three cents: It will never be the same, I will always see from different angles the sport, and how the practitioners choose to ply the trade. You will trade legacy for neurological wellness, possibly. Yes, boxing is the sweet AND savage science.