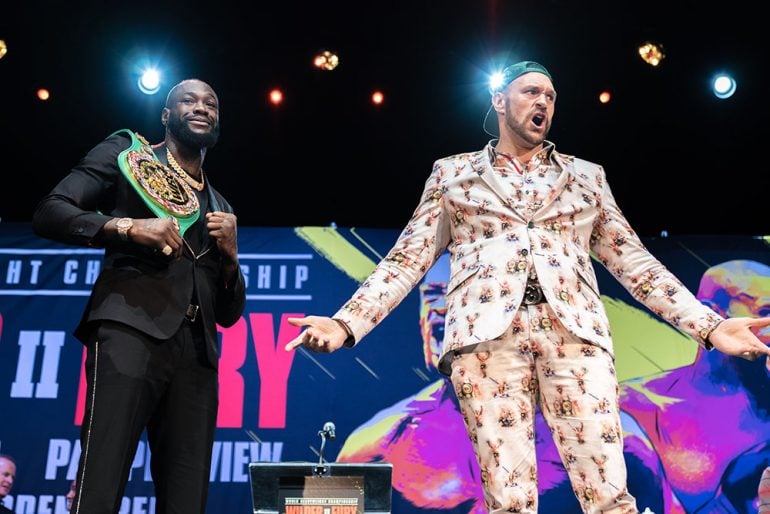 Whatever he does on fight night, nobody can say that Tyson Fury hasn't tried to entertain ahead of his February 22 rematch against Deontay Wilder. (Photo by Ryan Hafey-PBC)
13
Feb
by Joseph Santoliquito

The days are counting down to the Deontay Wilder-Tyson Fury showdown rematch next Saturday, Feb. 22, at the MGM Grand Garden Arena, Las Vegas, Nevada (FOX & ESPN+PPV).

“There’s no strategy going into the fight,” Fury said. “I’ve been 12 rounds with him. I outboxed him quite comfortably, and I took his best shots. I took his best shots, got up and got back to him. The one who should be concerned is Deontay Wilder, because with him being a one-trick pony and knockout artist.

“He knocked me down twice, in the ninth and 12th rounds. He had over two minutes in each round to finish me. He couldn’t finish me. It was like the game Mortal Kombat, ‘Finish him! Finish him!’

“He couldn’t finish me. He’s the one who should be concerned. He landed the two biggest punches that any heavyweight in the world could land on somebody else and the ‘Gypsy King’ rose like a phoenix from the ashes. I got back to my feet and I hurt him at the end of the (12th) round. It’s going to be pretty difficult on Wilder, not me.

“This is heavyweight boxing. I’ve been hit. I’ve been hurt. I got back up. But it’s not about being put down, it’s about getting up and keep moving forward.”

“I thought (Wilder’s) boxing IQ was okay, but it’s not up there to the likes of Wladimir Klitschko,” Fury said. “He was decent. He’s always looking dangerous.

“I felt the power. Ain’t so bad, ain’t so bad, I took his best shot and I got up. Make no mistake, all heavyweights punch hard. It’s not so much his power, it’s the speed with what he lands. When you’re in the ring, your adrenaline is flying high and you don’t feel the punches.”

In the end, Fury promised, it’s not anything Wilder can do. The opponent means “nothing” to him. Fury’s success will involve what Fury does.

Fury has predicted a knockout. He wanted to address the doubters.

“They won’t have to wait long to find out,” Fury said. “This is boxing and many things have been said many times in the past. Let’s see if I’ll back it up. (The judging) in the first fight played a massive role, because it made me uncomfortable. It’s made do things I didn’t want to do. When you know, when you’re taken out of our comfort zone, and pressed, and pressed, and pressed, then we become better.

“It was almost a blessing in disguise that I didn’t get the decision (in the first fight), because I would have kept working on my boxing. Box, box, box. I believe I can outbox Deontay Wilder very, very comfortably. But the fact of the matter is, I believe I boxed too comfortably the last time.

“It’s about what I do, not what he does. To guarantee a victory, I got to get a knockout. I don’t want another controversial decision. My own destiny lies within my own two fists.”