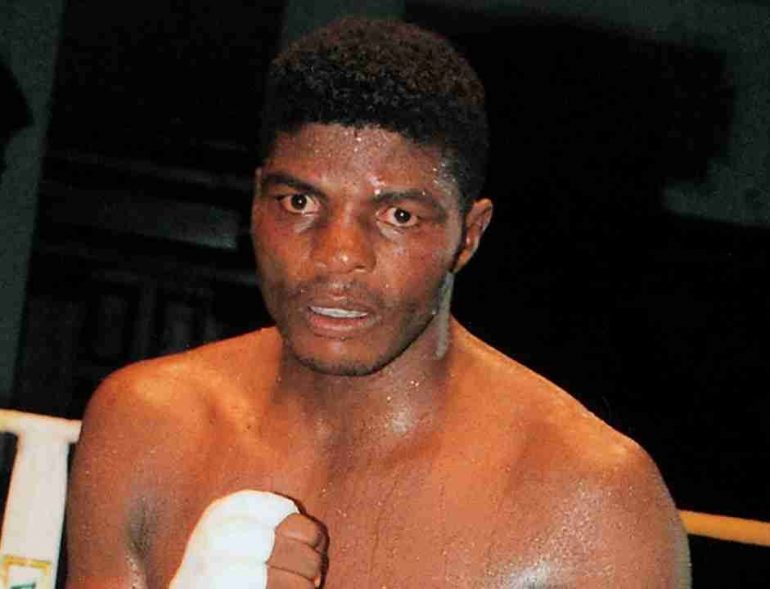 Thulani Malinga was born in Ladysmith, located within the KwaZulu-Natal region of South Africa, on December 11, 1955. He was a middle child of 10. His early years were difficult but they helped shape him for the battles ahead.

“We were living on a farm,” Malinga told The Ring. “We used to look after the cattle and the bigger guys used to hit us. That’s why I tried to defend myself by hitting them back.

“While I was growing up I liked to fight with other guys. I saw Muhammad Ali and wanted to be like him.”

Malinga took up boxing at 14 and enjoyed an extensive amateur career, winning three national titles at junior middleweight, middleweight and light heavyweight. His final record in the unpaid ranks was 250-50.

During his time on the amateur circuit, his uncle, Maxwell, bestowed the “Sugar Boy” moniker on him because of his sweet skills.

Malinga began his professional career in 1981. He lost his fourth outing but three fights later won the provincial title and later the national middleweight crown. He made four defenses before stepping up to light heavyweight in 1986. In that division, he won the national title from Sakkie Horn, who later beat him twice.

Malinga got back to winning ways and traveled to Germany for a clash with unbeaten IBF 168-pound belt-holder Graciano Rocchigiani in January 1989. Nelson Mandela, who was a huge boxing fan, reached out to wish him luck.

“When I went to Germany he sent me a telegram while he was still in jail,” Malinga remembered. “I never thought he knew me because he went to jail when I was still young.”

Despite a spirited effort, Malinga dropped a unanimous decision to Rocchigiani.

He responded by winning six fights but lost a controversial majority decision to John Jarvis in Colombia. Malinga then bested old rival Horn to earn a second world title shot.

This time he ventured to Italy where Lindell Holmes scored a unanimous decision to retain his IBF super middleweight title.

His next big opportunity came when he met Chris Eubank in Birmingham, England in February 1992 for the WBO 168-pound title. Again Malinga was on the wrong end of the scorecards, dropping a split decision.

“He never won that fight, but they made him the winner,” Malinga said defiantly. “They made Eubank the winner because he dropped me in the fifth round.

“After the fight, when I wanted to fight him again, he told me straight, ‘I’m not going to fight you again, I thought you were an easy opponent.'”

The determined Malinga returned to England three months later to face Nigel Benn. He gave “The Dark Destroyer” all he could handle but lost by a half-point on the referee’s lone scorecard.

The following summer Malinga faced burgeoning superstar Roy Jones Jr. in America and was stopped for the first time in his career.

At 38 years old the determined South African could have been forgiven for hanging up the gloves, however, he returned to action and posted six wins. Malinga soon became mandatory challenger for the WBC super middleweight title and promoter Rodney Berman was able to broker a deal with Nigel Benn’s promoter, Frank Warren, for a world championship rematch in Newcastle, England in March 1996.

“After agreeing a fair purse for him to fight Benn, Malinga called me requesting a meeting,” explained Berman. “He told me that God had spoken to him the night and felt that the purse was not adequate.

“He requested to pray again and apparently got the nod from the powers that be, and the rest is history. Needless to say, he got his R50,000.”

He also informed his promoter that God told him he would knock Benn out in the fifth round. Ironically, however, it was Malinga who hit the canvas in the opening seconds of that session, but while that prophecy didn’t come to pass, he did score the highly unlikely victory.

“It was life changing,” Malinga said. “That was my dream, to become world champion. Everybody felt I was finished, so I just wanted to show them I am still alive and that’s why I beat him. I only used my left jab, that was the one that bruised his face.

“I met [Nelson Mandela] when I beat Nigel Benn. He called me to his house to have lunch with him.” 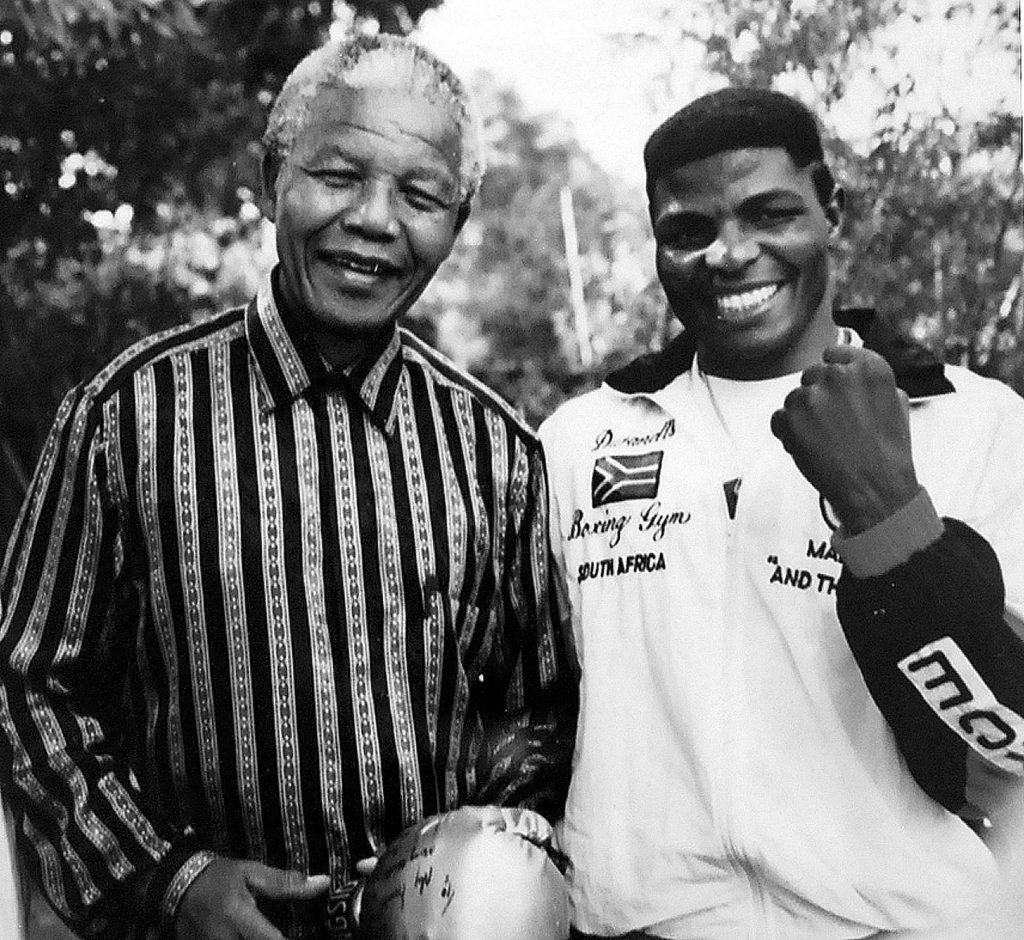 That summer Malinga returned to England and lost the title to Vincenzo Nardiello by split decision.

It looked like the 42-year-old would be put out to pasture. However, after a 17-month hiatus, he was offered a shot at the man who had relieved Nardiello of the title, Robin Reid.

Malinga did it again, upsetting Reid via 12-round unanimous decision to begin his second stint as WBC titleholder. Unfortunately he lost in his first defense once again, this time to Richie Woodhall.

A rematch failed to transpire and Malinga would wind down his career in Denmark, retiring with a record of 44-13 (19 knockouts).

From the money he earned in his career Malinga built a mansion in his homeland. Tragically, in 2000, it burned down with his grandson, Sabelo, inside.

Malinga, now 64, is married and has four children, although three of them have tragically passed away. He also has six grandchildren. The former two-time world titleholder lives in Ladysmith and puts his knowledge to good use, helping youngsters to box. He has been a lay preacher since 1991.

BEST JAB
Nicky Walker: Most of my opponents couldn’t hit me, but Nicky Walker used to catch me with the jab.

BEST DEFENSE
Roy Jones Jr.: It was not easy to catch him; he was a mover, he threw punches while he was still moving.

BEST HANDSPEED
Jones Jr.: His hands were so fast that sometimes you could not see his punches.

BEST FOOTWORK
Woodhall: He had good footwork, and he was awkward.

STRONGEST
Lindell Holmes: When you hit him with punches he could take them and come back and hit you.

SMARTEST
Chris Eubank: He wanted you to make mistakes and during that mistake he would counter punch. He was clever.

BEST PUNCHER
Eubank: He had a bigger punch than the others. I remember he caught me with a big punch, an overhand right and I was off-balance. When he came back to finish me he couldn’t because I had a good defense. Jones is not a hard puncher, but he’s fast.

BEST CHIN
Nigel Benn: Nigel Benn had a good chin because I thought I was going to drop him with the punches I caught him with but I didn’t. He took them and came back.

BEST BOXING SKILLS
Jones Jr.: Roy Jones had good skills. He was clever. He does not allow you to hit, but he hit you in his own time. He could do everything; jab, move, punch.

BEST OVERALL
Jones Jr.: He was the best because he was so fast. I couldn’t catch him because of his hand speed and movement in the ring. Jones gave me big problems in the fight, he was just so good and fast.