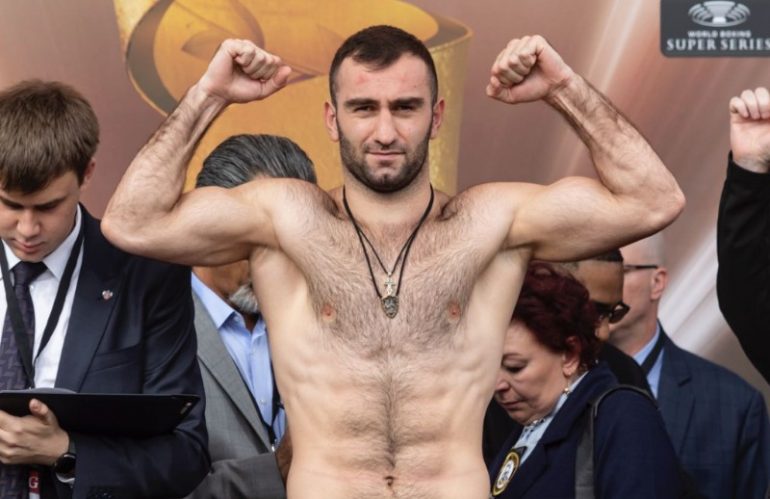 Murat Gassiev has secured an opponent for his debut as a heavyweight.

The former cruiserweight world titleholder will face Jerry Forrest on Feb. 29, it was announced Monday evening. The 10-round bout will take place at the Ford Center at The Star in Frisco, Texas, which is the training facility of the Dallas Cowboys.

The fight will stream live on DAZN.

Also added to the card, which will be headlined by the welterweight clash between Mikey Garcia and Jessie Vargas, junior middleweight Israil Madrimov will square off Charlie Navarro in a world title eliminator.

Gassiev (26-1, 19 knockouts), who is originally from Vladikavkaz, Russia and now lives and trains in Big Bear, California, has not fought since losing to Oleksandr Usyk in a world title cruiserweight unification bout in July 2018. The hard-hitting Gassiev was scheduled to return to action on July 27 against heavyweight gatekeeper Joey Dawejko, but had to withdraw from the fight due to a shoulder injury suffered during training camp.

The 26-year-old defeated Denis Lebedev by split-decision in December 2016 to capture the IBF cruiserweight title. Gassiev successfully defended the IBF title twice by stopping both Krzysztof Wlodarczyk and Yunier Dorticos.

Gassiev hopes to find the same success as a heavyweight, where he hopes to make a statement at the expense of Forrest.

“I’m so happy to finally be able to make my debut at heavyweight,” said Gassiev, who is trained by Abel Sanchez. “It has been frustrating not being able to fight, but I am ready to go now, and I want to make up for lost time.”

“When I box in Frisco, it will have been nearly 600 days since I’ve fought and a lot has happened in the heavyweight division over that time. I know that I can be a world champion at heavyweight, but I need to show to the rest of the division that I am a serious threat, and that starts on Feb. 29.”

Forrest (26-3, 20 KOs), who resides in Newport News, Virginia, last fought on Sept. 14, knocking out overmatched Martez Williamson in round 2. The 31-year-old southpaw lost a controversial split-decision to Jermaine Franklin in his previous fight on July 12.

Madrimov (4-0, 4 KOs) last fought on Oct. 5, stopping Mexico’s Alejandro Barrera in round 5 of a one-sided bout. He trains alongside newly-crowned IBF/ WBA junior featherweight titleholder Murodjon Akhmadaliev, which he believes has given him more motivation to work for a world title opportunity.

“I was so happy to watch Murodjon beat Daniel Roman in Miami, and that win has spurred in on to join him as a world champion this year,” said Madrimov, who is originally from Khiva, Uzbekistan and now resides in Indio, California. “Navarro is a proud and experienced fighter and I know he will be a great test for me, but this is a great night for me to showcase my talents and show the rest of the division that I am ready to win world titles.”

Both Madrimov and Akhmadaliev are trained by Joel Diaz.

Navarro (29-9, 22 KOs), who resides in Maturin, Venezuela, defeated previously-unbeaten Johan Gonzalez by split-decision in his last bout on July 18. The 40-year-old has won his last four bouts after losing by knockout to Carlos Ocampo.

Both Rodriguez and Ruiz are managed by Mikey Garcia.