Welcome to the sixth episode of Tourist Information: Insiders looking out and outsiders looking in from the world of boxing, a podcast hosted by noted writer Brin-Jonathan Butler. (You can listen to the fifth episode with award-winning artist and director Mickey Duzyj and former WBO heavyweight titleholder Michael Bentt here.) 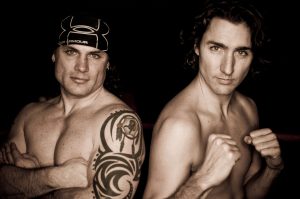 At 34, Patrick Brazeau, from Quebec, Canada, became the youngest member of the Canadian senate. Brazeau is an Alogonquin from the Kitigan Zibi reserve near Maniwaki. He worked for HMCS Carleton, a Royal Canadian Naval Reserve unit based in Ottawa that operates under the Canadian Forces Maritime Command. On March 31, 2012, Brazeau lost in a celebrity boxing match to Liberal MP (and future Prime Minister) Justin Trudeau. Many have traced this event as the impetus for Trudeau’s rise to becoming the Prime Minister of Canada only three years later. Brazeau spoke to me over the phone about this bizarre event he was involved with and the ups and downs of his life that followed.