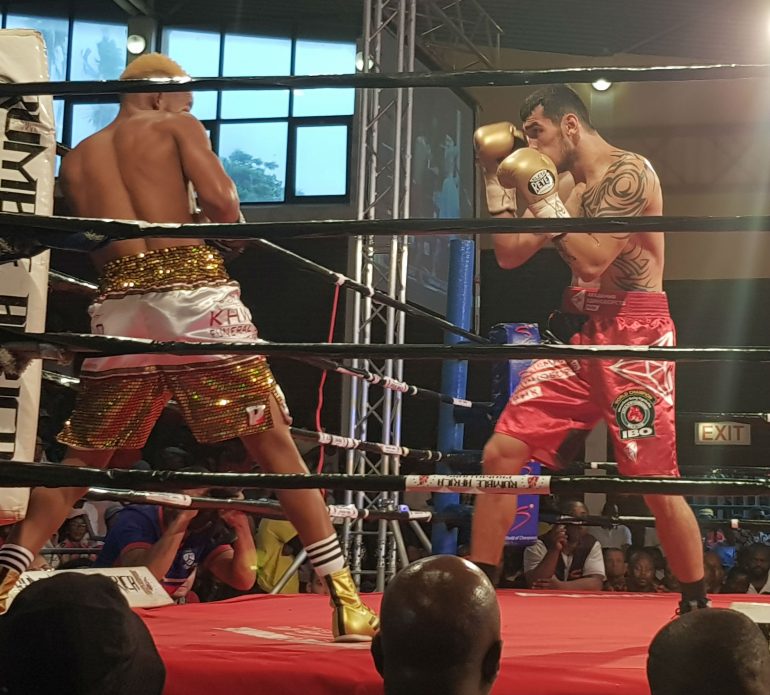 The IBF has upheld the result of the Shavkat Rakhimov-Azinga Fuzile fight, which had been disputed by Fuzile’s camp over claims that Rakhimov’s team may have used banned substances in the corner.

The fight took place on Sept. 29 in East London, South Africa, with Fuzile (14-1, 8 knockouts) being dropped twice in round eight by the Russian to be named the no. 1 contender for the IBF junior lightweight title.

In a letter to the New Jersey-based sanctioning body, Fuzile’s manager Colin Nathan alleges that a “stimulant-ammonia or smelling salts” were administered underneath Rakhimov’s nose prior to the knockout round. Under Boxing South Africa rules, smelling salts and ammonia are prohibited, with only water allowed to be administered in the corner.

Video of the incident in question show the cutman hold a white object under his nose twice, which made Rakhimov (15-0, 12 KOs) recoil.

The IBF upheld the original outcome of the Shavkhat Rakhimov-Azinga Fuzile on Sept. 29, 2019, which Rakhimov won by 8th round TKO. Fuzile’s camp alleged that Rakhimov’s camp was using smelling salts, which are banned in South Africa, in this clip pic.twitter.com/bOlatzoBSR

The three-page report released Tuesday doesn’t cite a reason for its decision, but states that Rakhimov will remain the mandatory challenger for the title which Joseph Diaz won on Jan. 30, when he defeated Tevin Farmer by unanimous decision. Diaz will have to make a mandatory defense against Rakhimov on or before July 30 of this year, the IBF ruling adds.

As for Fuzile, the IBF has ordered him to take part in another elimination bout “against the leading available contender” to determine the next mandatory challenger. After Diaz-Rakhimov, the next IBF 130-pound mandatory defense will be due on April 30 of 2021.

“While I accept the decision of the IBF, I by no means will accept the fact that Rakhimov’s corner were ‘on the level,’” said Nathan in reaction to the ruling.

“Life goes on, as does Azinga’s career.”

An email to John Hornewer, the attorney representing Rakhimov’s promoter Titov Boxing in this case, was not returned by the time of this story’s publication.