One way, maybe, arguably the only way for a boxer to reach all-time great status is this: the be-sainted one has to come up against a worthy foil.

Ali had to have Frazier, right?

OK, “The Greatest” was a special animal, and really, truly one that can never be replicated, because he was formed in a particular time and space and and societal crucible that this nation will never again experience. So maybe Mr. and Mrs. Clay’s son isn’t the right one to make the point about the need for that foil, to aid and abet the ascension of an athlete to the peak place in terms of legacy.

Because Ali’s book of life featured majestic chapters that were vivified by George Foreman. And yes, also Howard Cosell; their relationship on camera positively crackled. Their jousting shocked and amazed ya, and both men lifted the other to be able to show off their top traits in the most glowing light.

Frazier pushed Ali to do the same athletically, while also being the impetus to see Ali being humbled, by besting him in the ring. And Foreman versus Ali is like a folk tale you can pass to your kid, and your kid’s kid, down the line, speaking to the power of mindset, of believing in oneself, even when the world is pretty sure that the powers that be will grind you to dust.

And Ali doing the thrust and parry with Cosell illuminated his personality, which gleamed all the way to Pluto on its own. Now, HBO has dug into some archives, and is sharing another pairing which cements the Ali legacy as an ATG master of athlet-tainment, in Ali & Cavett: The Tale of the Tapes.

The foil, in this case, is talkmaster Dick Cavett, of the East Coast intellectual elite, who clicked with the audience because he retained a midwest humility, born from his breeding time in Nebraska. 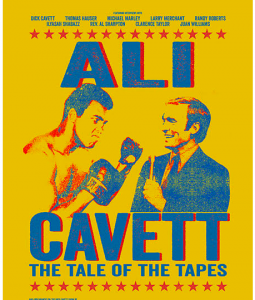 Cavett attended Yale, where he soaked up book smarts, listened to top tier professors who formed his world view but maybe more crucially, jetted to NYC, and hung around Broadway, and figured out how he’d make his mark vocationally. Cavett, now 83, is seen in the doc harkening back, and summarizing his taped and broadcast conversations with the loquacious pugilist who won gold at the 1960 Olympics. Cavett knew of talent, of what made someone magnetic, to the point that people would pile into an arena to be in the proximity of that attraction, because he worked as a talent coordinator on The Tonight Show.

So, the 60s were roiling, often more so exploding rather than unfolding, and Cavett helped the masses make sense of the the turmoil and shifts in culture.

The effort, produced by Robert Bader, kicks off by giving the requisite wiki on how Clay came to be Ali, and we see educators like Thomas Hauser, Larry Merchant and Al Sharpton clueing in millenials and Gen Zers what contributed to making Ali become the most famous person on the planet by 1970, beyond a fortuitous collision of genetic puzzle pieces.

“Do you feel bitter toward the entire white race?” Cavett asked, skillfully, because he wasn’t pugnacious, you got the sense he was there to learn from the person he was interviewing, not drawing heat to and for himself. 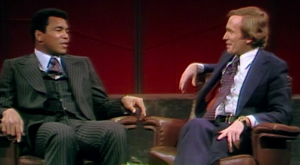 Journalists of today could get some tips, watching Cavett, how he defers to Ali. The talk show host doesn’t shrink totally, and sometimes pushes back, to make his own point. And damn straight, this doc is relevant, sadly, still, because the issues Ali thundered about, when communicating his stance about the relegation of blacks in America, have not disappeared. Today, that Ali would maybe focus more on mass incarceration, and be fearless possibly about the presence of white nationalism adherents in the aptly named White House.

This film draws from the 14 times Ali sat with Cavett, on “The Dick Cavett Show.” I think youger folks maybe don’t get it, how there were fewer options to entertain, no Netflix, and so when a show resonated, it was a shared experience in taking it in. Tens of millions would see Ali and Cavett, and hundreds of millions would see Ali. That breadth of impact certainly deserves to be examined and brought forth to new generations of citizens.

So, yes, there are a multitude of angles to watch this doc from, and you may find yourself wistful, and wishing we had the Ali that Cavett adored to learn from here and now. We could use Muhammad’s stubborn demand of self to speak truth to power.

Watch and enjoy the interplay between the all-time icon and this most talented journalist, and marvel at how those good old days were indeed, better.