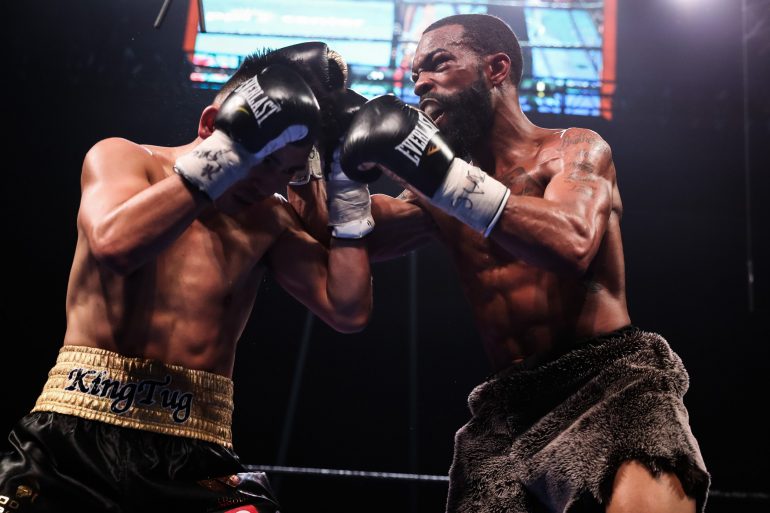 Thank you for your continued work on both The Ring Magazine and the mailbag…I look forward to them both.

As per usual, I enjoyed the annual Gary Russell Jr. sighting. Can you remember a fighter of his ilk seemingly wasting so much of his prime without extenuating circumstances? The guy has 6 kids! You’d think he’d be fighting 8 times a year. LOL! Seriously though, he isn’t making Floyd or Canelo money and with his infrequent fights can’t be known much beyond diehard fans.

Now, he’s talking about possibly moving up to 130. Talent wise he seems very capable of winning, but I wonder if his size is much better suited for 126. He never seemed to hurt King Tug and I thought he looked much smaller than him too. Gary appears to have a good chin, but what are your thoughts on the move? Is there really more money up there?

If you were managing him, would you try fighting more at 126 and possibly forcing the other titleholder’s hands? Keep up the great work, thanks again. – Scott

Thanks for the kind words about the magazine and mailbag column, Scott.

If I were managing Russell, my first priority would be getting him to fight more than once per calendar year. If I could get him up to twice a year, I’d consider that a victory.

I would not bother myself or Gary with the other titleholders, and I’d definitely tell him to stop chasing Leo Santa Cruz. (That endless, inane cat-and-mouse bulls__t is just embarrassing.) 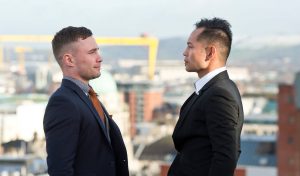 Frampton and Donaire made for a decent scrap at 126. Dougie thinks either veteran makes a good opponent for Gary Russell Jr. Photo by Mark Marlow / Frank Warren

I would try to keep him at featherweight for at least another 12-18 months and rather than push unification bouts, I’d instead target veterans with established names and recognized accomplishments. I’d try to get two former featherweight standouts now campaigning in other weight classes to come back down or back up to the 126-pound division – Carl Frampton and Nonito Donaire. I think those matchups would move the needle internationally, make for entertaining bouts, and I think Gary has a good shot at winning them.

I’d also try to get Gary to face certain standouts on key ethnic/national holidays, such as Michael Conlan on St. Patrick’s Day and/or Luis Nery on Cinco De Mayo or Mexican Independence Day weekend. If he beats two out of the four I mentioned, especially if the fights are good (and most would be), I think he’d ignite some casual/crossover fan interest.

If he begins to struggle to make 126 pounds or if he runs out of viable featherweight opponents, I’d jump him all the way to 135 and pursue showdowns with Tank Davis (which would be a huge event in the Washington D.C./Maryland area) and Vasilily Lomachenko.

As per usual, I enjoyed the annual Gary Russell Jr. sighting. Russell looked sharp and skilled, as usual. It’s clear that he stays in the gym and keeps his weight down between fights, which lets us know that he’s got discipline because there are long stretches between his camps.

Can you remember a fighter of his ilk seemingly wasting so much of his prime without extenuating circumstances? Nope, but I have a feeling that it’s going to become more common with this current generation of elite-level pro boxers. It’s too bad, because guys like Russell and Keith Thurman are among my favorites to watch.

The guy has 6 kids! You’d think he’d be fighting 8 times a year. LOL! I hear ya. I’m pretty sure that Russell lives within his means and has other business interests/revenue streams outside of boxing.

Seriously though, he isn’t making Floyd or Canelo money and with his infrequent fights can’t be known much beyond diehard fans. True, and true, but some prize fighters aren’t that concerned about being rich and famous. I think Gary is one of them.

Now, he’s talking about possibly moving up to 130. I’d only have Gary go 130 pounds for a rematch with Joseph Diaz Jr. if I were his manager/adviser.

Talent wise he seems very capable of winning, but I wonder if his size is much better suited for 126. I think so. He’s short and has short arms, even for a featherweight. However, his boxing IQ, experience and hand speed make him a threat at the heavier weight classes.

He never seemed to hurt King Tug and I thought he looked much smaller than him too. KT is “Mongolian tough.” It would have been a mistake for Russell to even try to break that dude down.

Gary appears to have a good chin, but what are your thoughts on the move? Is there really more money up there? The money in boxing is ALWAYS at the heavier weights.

Seems everybody has written off GGG when it comes to the best active fighters. You too? Do you know what GGG plans next? – Matthias, Germany

I haven’t written off GGG, and neither has The Ring. Just because he’s no longer the dominant middleweight champ doesn’t mean that he’s not arguably still the best 160 pounder on the planet. I thought he outpointed Canelo in their first showdown and held the Ginger King to a draw in the rematch. I thought he legitimately turned back Sergiy Derevyanchenko’s challenger last October. He’s struggling with the top level guys, but he’s hanging in there and giving as good as he gets. (AND he’s making for tremendous fights! Canelo-GGG2 was Ring’s 2018 Fight of the Year; Golovkin-Derevyanchenko was a strong 2019 FOTY candidate. So, being an action fighter keeps one in demand.) 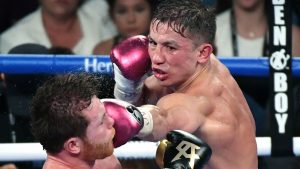 GGG is still an elite fighter in Dougie’s eyes (and probably Canelo’s too).

Golovkin is No. 7 in The Ring’s Pound-for-Pound rankings. He’s No. 6 on the personal P4P list that I turn in to the BWAA every month. I think he’s arguably No. 5 (ahead of both Aleksandr Usyk and Erroll Spence).

Next is Ring’s No. 6-rated contender, Kamil Szeremeta, in April, probably in Chicago. And then his team (and DAZN) will revisit the push to make a third bout vs. Canelo in September. If that doesn’t happen, they’ll make offers to Jermall Charlo and Ryota Murata, or consider a rematch with Derevyanchenko.

People who are writing GGG off probably have agendas, but we know it’s all bulls__t, because they’ll be tuning in when he fights, especially showdowns with Canelo, Charlo, Murata or SD.

WHAT CAN RIGO DO?

After realizing his new “War Rigo” style was going to be hazardous to his health following the 1st round, Rigo wisely reverted back to the style that befuddled his opponents and bored everyone expect the purest of purists to death.

He looked a little slower but otherwise seemed more than capable of challenging the champions at the weight. He also showed his left got plenty of pop down there too.

How do you think he would fare against the Casimero/Inoue/Oubaali or top contenders like Donaire/Rodriguez/Tete? 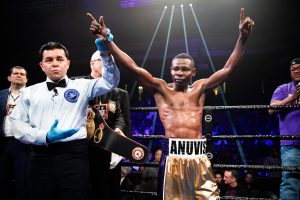 Guillermo Rigondeaux made a successful move down to bantamweight. Photo by Amanda Westcott/Showtime

Based on what I saw against Liborio Solis, I’d pick Inoue to stop him by the middle rounds, and I’d favor Donaire to outpoint him in a punishing fight (mainly for Rigo). I think Casimero, Oubaali, E-Rod and Tete would be very live and dangerous for Rigo, but I can also envision his unique brand of minimalist evasive movement and left-hand-counterpunching brilliance giving them trouble.

Rigo remains ultra-skilled, ring savvy, and a dangerous master counterpuncher, but he’s also vulnerable. He’s less mobile and elusive than he used to. He can be outworked, outmaneuvered, beat to the punch by a speed demon; he’s almost a sitting duck for a sharp-shooting technician like Inoue.

After realizing his new “War Rigo” style was going to be hazardous to his health following the 1st round, Rigo wisely reverted back to the style that befuddled his opponents and bored everyone expect the purest of purists to death. Hey, it got the job done, although he had to sweat out a split decision. I didn’t find it as boring as the Allentown crowd or some on my Twitter TL. The opening round got my attention and the threat of his left-hand viper strike held it. Whenever my inner-Blood Thirsty Ghoul tempted me to ignore the “Rigo ring genius,” he stunned or staggered the game Venezuelan veteran.

He looked a little slower but otherwise seemed more than capable of challenging the champions at the weight. I’m not so sure about that. Inoue, Oubaali and Casimero will bring A LOT more to the table than Solis.

He also showed his left got plenty of pop down there too. Yes, it’s still a weapon to be respected, but keep in mind that Solis is 37, battle-worn and, stylewise, tailor-made for Rigo and that vaunted punch.

Hi Doug,
Just had to reach out and express gratitude and say a thank you to Joseph Santoliquito on the beautifully written article on Charles Conwell and his journey through tragedy and his warrior spirit. Absolutely loved it, very moving.

Love and condolences to Day’s family. To Conwell, I’ll be rooting for you to get that title. You’re right, both of you wanted the win that night, fighting like warriors to achieve your goals. All the best. – Dave

Major props to Santoliquito, a former Ring editor, frequent contributor (and copy editor), and president of the Boxing Writers Assoc. of America, for tackling a very difficult subject, one that took him on an emotional journey. And a personal thank you to Joe for allowing RingTV.com to publish Conwell’s story, which is hopefully the beginning of an inspirational climb to prominence. I hope fans get behind this young man.

There will be a follow-up version to this story published in the next Ring Magazine (May 2020 issue).

Who, in your opinion, are the best fighters in any given weight class who do not yet have a title? – Gregory

Thanks for finally sharing your interesting question with the mailbag, Gregory.

Aleksandr Usyk, the only pound-for-pound-rated fighter without a major world title, and the two WBSS runners-up, Nonito Donaire and Regis Prograis, immediately come to mind.

At heavyweight, I’ll go with Tyson Fury (if you don’t recognize the mythical “Lineal Champ” status).

At junior middleweight, I’ll go with Jarrett Hurd (if he returns to 154 pounds) or Erislandy Lara.

At welterweight, I’ll go with Keith Thurman or Shawn Porter.

At featherweight, I’ll go with Xu Can (if you don’t count the WBA’s secondary title, and we don’t here at The Ring).

At bantamweight, you know it’s Donaire.

At junior bantamweight, I’ll go with Donnie Nietes or The Little Chocolate KING (and you should KNOW who that is).

At junior flyweight, I’ll go with Hekkie Budler (if the rugged South African vet is still fighting) or Carlos Canizales.