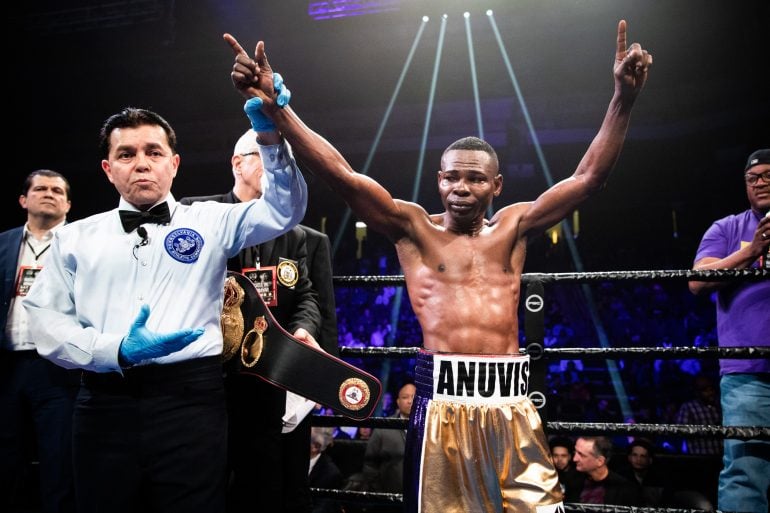 Guillermo Rigondeaux made a successful move down to bantamweight. Photo by Amanda Westcott/Showtime
08
Feb
by Joseph Santoliquito

ALLENTOWN, PA — Guillermo Rigondeaux is fighting for his relevance. “The Jackal” will turn 40 in May, and despite how great he looks for his advanced age, by boxing standards, there is no refuting Father Time.

Rigondeaux may have so many “good fights” left on his physical odometer, which was compounded by coming down in weight.

With the prospects of facing “The Monster,” Naoya Inoue, the unified IBF/WBA bantamweight titlist, Rigondeaux certainly conserved a lot of energy in beating Venezuelan Liborio Solis by split-decision to claim the WBA world bantamweight secondary title Saturday night on Showtime from the PPL Center in Allentown, Pa.

In the first round, Rigondeaux, who was down three times in his career, was rocked by a Solis left hook. Solis closed the first with a right, again stunning Rigondeaux.

Maybe it’s why he took the cautious approach in the second. He flicked out the jab, and Solis couldn’t crowd Rigondeaux as he did in the first.

It’s a template that continued round, after tedious round.

Then, with 2:23 left in the seventh, Rigondeaux stunned Solis with a left uppercut and Solis went reeling back into the ropes. Referee Benjy Esteves justifiably called it a knockdown, and Solis survived the round.

Again, in the 10th, Rigondeaux woke up and landed a series of lefts on Solis, who was reduced to a punching bag.

“Like I’ve showed everyone before, I can fight right in the middle of the ring,” Rigondeaux said. “I tried that in the first round, but after that round, Ronnie Shields told me to show him some boxing and cut the ring off. I’m available for anyone who wants to get in the ring. Who do the fans want to see me fight? I’m ready for any fighter. Now that I’m at my weight, let’s go hunting.

“Liborio is an excellent fighter, but I saw the opportunity to strike and scored the knockdown. Ronnie Shields is the real champion. The preparation that he gave me for this fight was incredible. Ronnie is one of the best.”

Rigondeaux stymied Solis with his footwork. His defense forced Solis (30-6-1, 14 KOs) to follow him, and pay a price when he got close.

“I thought I won the fight,” Solis said. “Going backwards is no way to win a vacant title. I put the majority of the pressure on him. I’m not going to argue with the judges, but I thought I did enough to win.

“The punch surprised me on the knockdown, but I wasn’t hurt. I was ready to fight immediately right after.

“I hurt him in the first round and that’s what caused him to run. I’d like a rematch because I thought I got the better of him tonight.”

Each promised a knockout.

What they delivered was an early 2020 Fight of the Year candidate.

Arboleda (16-1, 13 KOs) got up from a 12th-round knockdown to win a split-decision over Velez, whose energy output dropped in the middle rounds, then surged back late.

Apparently, it was too late.

“Jayson Velez is a great fighter and has a great style,” Arboleda said. “He was trying to use that to break me down tonight. Velez has faced a lot of good fighters and I believe I belong with those fighters. I had him hurt badly a few times, but I just got a little bit ahead of myself and didn’t finish.

“My next fight is up to my team. I’m in line for the title, but we’ll see how things play out. I want to stay busy for sure this year.

“It was a clean shot on the knockdown but it happened because I wasn’t doing what I was supposed to stylistically and with my footwork. I was a bit tired, but I wasn’t too hurt. I went right back to fighting.”

“It was a close fight, but I think I won the fight,” Velez said. “It could have gone either way. I think I knocked him down twice but they didn’t count one of them. It’s okay. I showed that I’m a warrior like always. I have six losses now but I’ve never been knocked out. I’m still here, and I believe I’ll be world champion someday.”