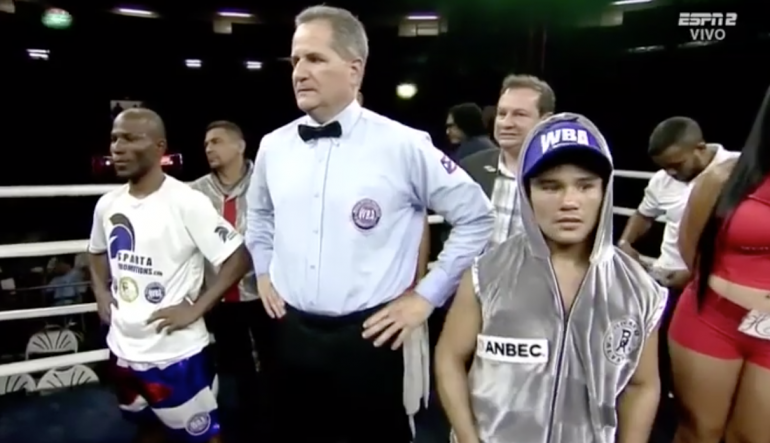 Matellon made his first impression in the fight early on, rocking Lopez along the ropes with a series of uppercuts in the opening round. He repeated the feat once again in the second, landing the uppercut and evading the left hook counter, and then landing a right hand off the spin moments later. The traps that Lopez looked to be setting by backing himself into the ropes began to pay off in the fourth, when he caught Matellon with a counter hook. Both fighters hit the canvas in that round, but both instances were due to slips.

Lopez increased the aggression in the fifth, swinging wide and hard, and landing on occasion. Mattelon kept his poise, and focused on the body whenever Lopez went back on the defensive.

Matellon’s superior skill and fluid combination punching gave him the edge for the proceeding rounds, but Lopez never stopped being dangerous. He hurt Matellon towards the end of the 11th, smothering him with punches along the ropes as the fatigue set in, but sent a message in the 12th by landing several hard right hands to solidify his position in the fight.

The win earned Matellon the vacant “interim” WBA light flyweight belt, further muddling a complicated picture where the WBA recognizes Carlos Canizales as their “regular” champion and Hiroto Kyoguchi as the full champion.

That wasn’t the only “interim” belt the WBA handed out. Luis Concepcion (39-8, 27 KOs) of Panama City overcame a rough challenge from Rober Barrera (23-2, 13 KOs), knocking the Colombian across the ring and nearly through the ropes with a right hand in round 11, before the referee stopped the bout moments later. Concepcion, 34, is now the WBA’s “interim” flyweight titleholder.

‘Fighting Words’ — Once Again the Underdog, Just How Caleb Truax Likes It