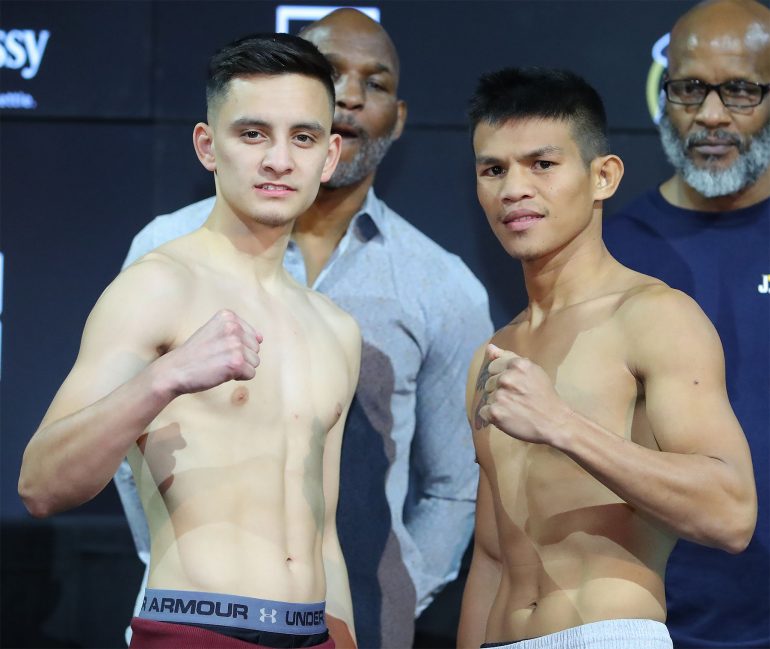 Flyweight Ricardo Sandoval stopped gamekeeper Raymond Tabugon in Round 7 of the main event of a Golden Boy Promotions/DAZN card on Thursday night at the Fantasy Springs Resort Casino in Indio, California.

With the victory, Sandoval improves to 18-1, 13 knockouts and has now stopped his last five opponents.

Sandoval, who resides in nearby Rialto, was coming off a fifth-round knockout victory over Venezuela’s Gilbert Gonzalez on Nov. 16. Tabugon had split his previous four bouts and figured to provide a test for Sandoval.

After a competitive opening round, Sandoval scored a knockdown in the opening moments of the second dropped, dropping Tabugon with a left hook to the head. To his credit, Tabugon was game, but slowly began to feel the impact of the accurate and hard punches from Sandoval.

As the bout progressed, Sandoval connected with two and three-punch combinations. By Round 4, Sandoval committed right hands and left hooks to the body of Tabugon, slowing the Filipino fighter down.

After the end of the sixth, Tabugon looked spent after being battered against the ropes by Sandoval. Referee Eddie Hernandez asked Tabugon if he wanted to continue, receiving a “one more round” response as Tabugon sat on his stool.

Tabugon was game and did fight back, but Sandoval’s punches were just too much. Sandoval pinned Tabugon against the ropes, landing several combinations that prompted referee Eddie Hernandez to step in and stop the bout at 1:43.

In the co-feature, bantamweight contender Oscar Negrete, who is originally from Colombia and now resides in Paramount, California, defeated Alberto Melian by unanimous decision.

Negrete is best known for his three fights against fellow contender Joshua Franco, where two of those fights ended in split-decision draw with Franco winning the other fight by split-decision on Apr. 25.

Melian, who knocked out Juan Kantun in his previous bout on Nov. 23, was the aggressor and effective fighter from the opening bell, but Negrete was able to fight effectively in the pocket by the fourth round. Negrete countered effectively, mixing his attack to the head and body.

Negrete controlled most of the action in the second half of the fight as Melian was mostly relegated to throwing one punch at a time. Negrete mostly outboxed Melian during the final two rounds to solidify the victory.

All three judges scored the bout 60-54 in favor of Urbina (12-0, 2 KOs), who is originally from Hermosillo, Mexico and now resides in Phoenix, Arizona.

Bosques was able to keep up with Urbina, but Urbina’s punch accuracy and commitment to throw to the body began to break her down. Bosques, who resides in Saint Petersburg, Florida, began to tire in Round 5 and it looked like any combination would drop her to the canvas, but she was able to weather combinations from Urbina to make it to the final bell.

Both fighters stood in the pocket for much of the fight, throwing wide hooks and crosses. Flores, who challenged twice for a world title belt at 122 pounds, was game early in the fight, but Baez who landed the more-effective punches, landing several lead or counter left hooks to the head.