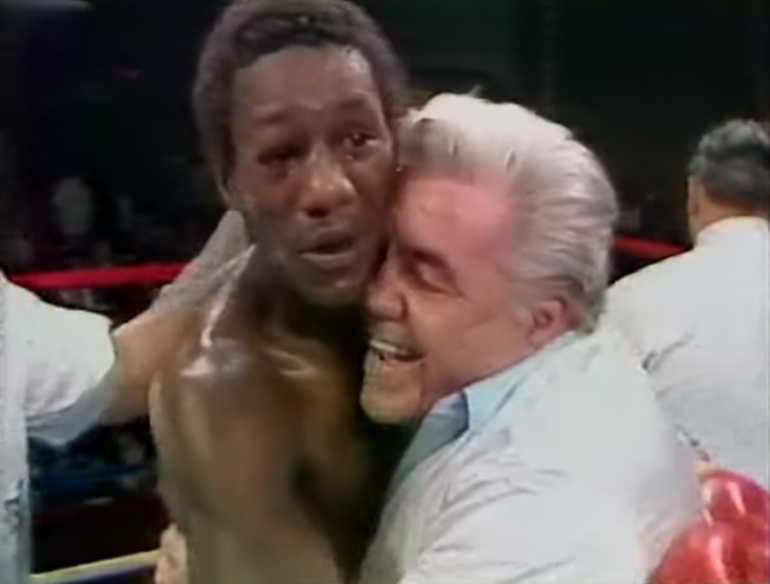 Johnny Bumphus, whose 22-0 streak to begin his career carried him to the WBA junior welterweight title, died Monday in his hometown of Tacoma, Wash. of cardiac arrest, according to the Tennessean newspaper. He was 59 years old.

A former amateur standout, Bumphus won the 1980 Olympic trials at 139 pounds, defeating Ronnie Shields on points, but never got a chance to compete because of a U.S. boycott on the Moscow Games. Instead he turned pro, signing with manager Lou Duva and relocating to New Jersey.

At 6-foot, the southpaw had the range to jab from distance, but the fluidity and hand speed to put combinations together. Despite his height, he was comfortable fighting on the inside, and his willingness to exchange often put him in danger.

In his 19th fight, Bumphus had to climb off the canvas in round two and fight through a closed left eye, he kept his undefeated record by knocking Michael Bradley through the ropes in round six for a knockout win.

In honor of his death, here’s Johnny Bumphus’ 1983 brawl with Michael Bradley. Bumphus overcomes his first knockdown, and a swollen left eye, to knock Bradley down multiple times, and finish him in round 6 pic.twitter.com/DdnPWgNAuG

The following year, in 1984, Bumphus met the vastly more experienced Lorenzo Garcia for the belt Aaron Pryor had vacated by retiring. Bumphus once again had to show he could comeback from a knockdown, after getting knocked down in the fourth. Against the defensively sound Argentine, “Bump City” had to fight, standing inside to outwork Garcia.

At the end of 15 rounds, Bumphus won a close, but unanimous decision, falling to his knees in the ring in Atlantic City, before Garcia hoisted up the new champion and carried him.

The celebration didn’t last long. Bumphus’ eagerness to trade punches cost him in his first defense later that year, against the rugged brawler Gene Hatcher, when Bumphus was dropped in round 11 on a well-timed left hook. Bumphus’ legs were gone, and even though he beat the count, the fight was stopped shortly after.

Hatcher’s celebration was interrupted by an irate – and still dazed – Bumphus, who had to be restrained while protesting the stoppage. Bumphus later calmed down, and congratulated Hatcher, but maintained that he could have continued. All three judges had Bumphus ahead at the time of stoppage.

He would be champion only once. Bumphus moved up to welterweight and won seven straight, including a technical decision over Marlon Starling in 1986.

Bumphus’ final fight came the following year, at age 27, when he was stopped in two rounds by WBC/IBF welterweight titleholder Lloyd Honeyghan at the Great Hall at Wembley Stadium in the United Kingdom. The ending was controversial; Honeyghan was halfway across the ring before the bell sounded to begin the second, with Duva still in the ring and Bumphus barely off his stool, and knocked him to the floor with a left hook just as the bell rang.

The referee deducted a point from Honeyghan but the fight was essentially over. Bumphus was stopped moments later, and kept his word to retire if he didn’t win the welterweight championship.

Bumphus was the youngest of seven children, the only boy, and had worked part-time in the early ’80s for the Nashville sheriff’s department. After his career, Bumphus struggled with drug addiction. A 1990 Los Angeles Times article mentions two arrests involving crack cocaine in Tacoma, a few stints in rehab, and a series of relapses which led Duva to break ties with him as an assistant in the gym.

In a 2010 article in The Sweet Science, Bumphus said he was disabled and had difficulty standing and walking, which began to manifest at the tail end of his career.