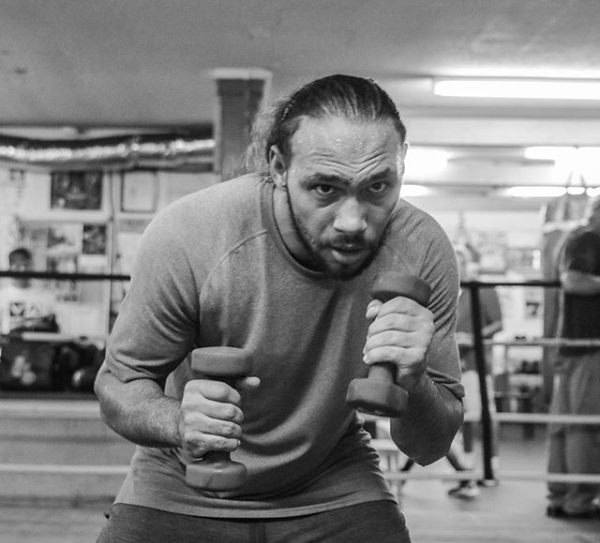 The welterweights are maybe the hottest division in the sport, and it figures that will be more so the case in the next few months, as Manny Pacquiao figures out his next.

And someone who knows Pacman well, Keith Thurman, is always mentioned as one of the best in the 147 sphere. But….

“One Time” is coming off a loss, to Manny, and is fighting perception that he is oft injured, and has a part-time hitter mentality.

Yeah, critics can be sharp with those assessments…But the Floridian took some questions from Ak and Barak on SiriusXM on Monday, and so he touched on some of those barbs.

He took issue anyone thinking he’s past tense; he says that people come up to him and tell him they think he’s undefeated, that he bested Pacquiao.

People haven’t seen the Keith Thurman who was at an apex of motivation in too long, he asserted. He admitted that in the past three fights he has been “not one hundred percent.” One part of that has been weight management, or, maybe, slight mismanagement.

The boxer said coming up next he will get a check-up, in two weeks, to assess his healing from hand surgery. An early summer return could be in the cards, he shared. Then, he’d like to face either Manny Pacquaio, or Errol Spence, this year. He said he makes clear to Al Haymon what is in his heart, and he declared that fights with him in it, those are the exciting fights in the 147 division.

More material– Thurman said it’s good that we’re seeing inter-promotional events, “it’s happening slightly more frequently,” and he is buoyed by us seeing the mashup with Tyson Fury (Top Rank) and Deontay Wilder (PBC). The host Ak said what about making a fight between one of the PBC welters and Terence Crawford from Top Rank/ESPN. Thurman said yes, his side of the street dudes, most of them have plenty of flexibility, and all have more room to work than Crawford, in his mind. Why should the PBC gang chase the guy, the one guy, over there, he asked rhetorically. What about your legacy, they gently prodded him. “At the end of the day, I’m not duckin’ nobody and if I get presented with a contract that makes sense, I sign ’em, OK?”

The hosts did a great job being persistent, respectfully so. Would Keith if offered a one off versus Mikey Garcia on DAZN take that offer to PBC bossman Al Haymon? Would Thurman press Al to say yes? “Any fight that makes sense, we don’t deny, man,” he answered.

OK, how about Keith Thurman versus Bud Crawford, eventually, they asked him.

He paused for two beats. “I would easily…I take any fight that makes sense, at any time, of my career. I’m not a champion of the world, curently, I’m a two time champion of the world.” And yeah, he’d like ’em back, those crowns. (The implication, to me, was that he’d like to win titles back, before gunning for Crawford’s WBO version.)

–Barak noted that Haymon has network deals, so no, it’s not like his fighters are totally free agent operators.

–Thurman (29-1 with 22 KOs; below, looking sharp in a suit during a TV hit) was asked about some of his side gigs, such as appearing on “Inside PBC,” and he said that matter of fact, he was back in the gym that very day, for the first time in a spell. 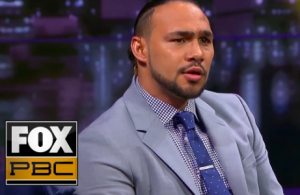 –Thurman had surgery on his left hand, a bone fusion, on Sept. 4. His left hand had been subpar throughout 2019, he declared, and he is looking forward to more so being a “two handed” fighter, he made clear.

–The hitter said his division is, darn right, stacked. He mentioned Yordenis Ugas, rated No. 7 by RING, who he believes is outside the top ten at welter. (I agree more so with RING than with Keith, for the record.)

Errol Spence is in that mix. A Spence vs Thurman bout was craved in 2016-2017, and Spence used to needle Thurman, for supposed ducking. 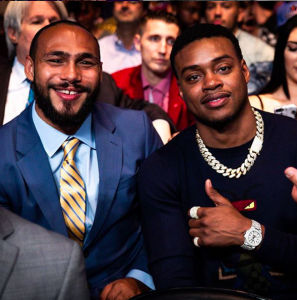 Would Thurman like to meet Spence again, in less friendly circumstances? He was asked, by Ak and Barak.

When Spence met Porter (Sept. 28, 2019), was Keith surprised at how that went? “I was disappointed with Errol’s performance,” the Fla. boxer said. He said he understands why Spence didn’t over-perform, somewhat, because Porter is a hard nut to crack, his intensity is of a higher caliber than most are used to.

–Thurman had a 22 months break, after beating Danny Garcia in a tight fight in Brooklyn; he sat sidelined, dealing with injuries, and also getting hitched. He had elbow surgery in April 2017, after the Garcia outing, a split decision triumph.

–Thurman spoke on how this era is different. There are opportunities earlier now, at maybe 17-0, versus a 22-0 back when he was on the come up.

–A thought I had….About that nickname, “One Time.” You scan the BoxRec and you see a string of decision wins. The last time Thurman finished up before the alloted round count was July 2015, against Luis Collazo. And the NY vet didn’t get dropped and stopped, the fight was halted because of a cut on Luis’ eye, as he told the ref he couldn’t see. I noted that the clip I read referred to Thurman as being “hailed by many as boxing’s next big star.” Before that, Thurman had enjoyed an early ending in April 2014, when Julio Diaz quit after the third, saying his ribs were hurting too much from a Thurman body blow. Leonard Bundu, Robert Guerrero, Shawn Porter, Danny Garcia, Josesito Lopez and Manny Pacquiao all finished their fight against the 31 year old fighter. Let’s see if the hand and the elbow and shoulder and everything can stay glued together, and Thurman’s pop can return to form, so that nickname fits.

–Thurman spoke on how this era is different. There are opportunities for a title crack earlier now, at maybe 17-0, versus a 22-0 or thereabouts back when he was on the come up.

Lots of ground covered by Ak and Barak over at SiriusXM today.