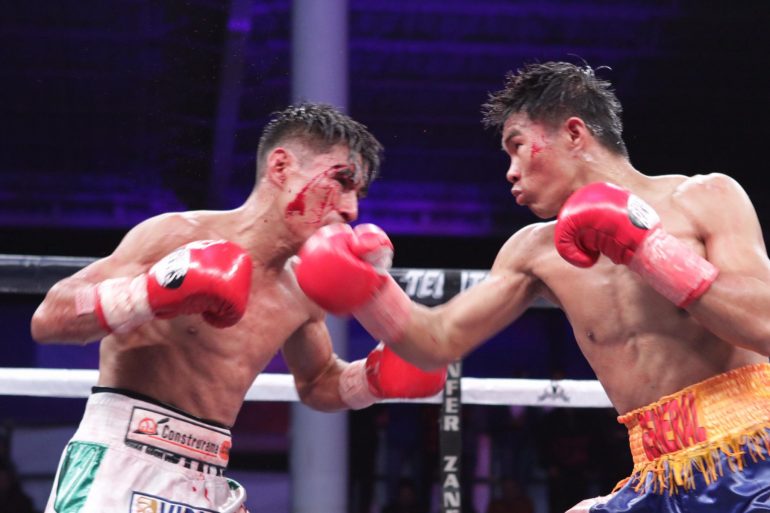 The first defense of the IBF strawweight title for Pedro Taduran, against Daniel Valladares, was shaping up to be a Fight of the Year contender. Instead, it ended prematurely on an accidental headbutt just as it was getting started.

The bout was sent to a technical decision at the conclusion of the fourth, with one judge scoring it 39-37 for Valladares, while the other two overruled that verdict at 38-38, leading to a majority draw on Saturday night at Jardin Cerveza Expo in Guadalupe, Mexico.

The crowd went wild during the entrances for Valladares of nearby Monterrey, while Taduran of Libon, Albay, Philippines was audibly booed.

The southpaw stance of Taduran (14-2-1, 11 knockouts) and Valladares (22-1-1, 13 KOs) led to head clashes from the opening bell, and the cut above Valladares’ right eye opened with approximately 30 seconds remaining in the first. 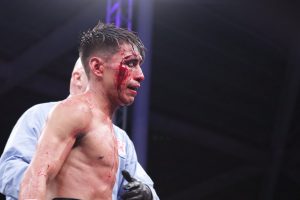 The cut over the right of Daniel Valladares. Photo by Jhay Oh Otamias

With the possibility of an early ending looming large, both fighters fought with greater urgency, with Taduran attacking and Valladares looking for counterpunch opportunities. The 23-year-old Taduran, who won the belt with a fourth round stoppage of compatriot Samuel Salva last September, fought in a style reminiscent of his promoter, Manny Pacquiao.

The bout produced brutal exchanges, with Taduran landing the hardest blows with his straight left, and Valladares keeping pace with his own shots. The pink tinge to the glove tape underscored the cut that was to play a factor in the bout shortly after.

The doctor came in to take a look at the cut 40 seconds into the fourth, but allowed the bout to continue. Neither fighter wanted to concede a second of control as they landed home run blows in combination while attempting to push the other backwards.

There was plenty left to decide in the bout when it was stopped after the fourth, and a rematch could settle those unanswered questions.

“We would love to defend the title in the Philippines, or [be] happy to give DV a rematch when he is ready and healed,” said MP Promotions president Sean Gibbons in a text message. “He deserves it.” Art Monis, who manages Taduran, is on board with a rematch, but feels it shouldn’t take place in Mexico.

Taduran is one of four current world titleholders from the Philippines, joining Pacquiao, Jerwin Ancajas and John Riel Casimero.

Valladares entered the fight rated no. 1 by the IBF at 108 pounds, and was named the mandatory challenger despite fighting at the 105-pound limit for the first time in his career. He had previously scored stoppage wins over Filipino fighters Christian Araneta and Merlito Sabillo.