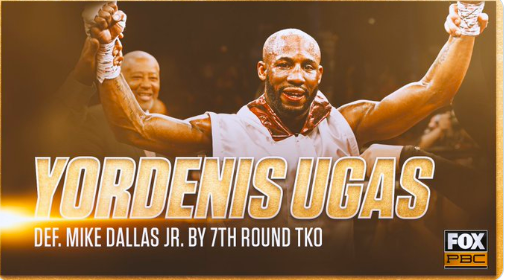 Welterweight Yordenis Ugas has been feeling like he’s getting better as he gets older, and that he still has professional peaks to enjoy, in his 33rd year of life. A fight against Mike Dallas Jr., on paper, would not be one of those peaks, truth be told, but a win over Dallas would be a steppingstone to a meaningful title fight, quite possibly.

Ugas’ path to higher prosperity stayed on line, because the Cuban emigre boxed with focus, intensity and confidence, to the point he scored a stoppage over Dallas Jr in Biloxi, Mississippi at the Beau Rivage Casino on Saturday evening. This was not a vicious beating, an ugly thrashing that made you want Dallas’ corner to pull the plug, as the Cali native had some success. Indeed, Dallas maybe won the first two thirds of round seven, but then Ugas roared back in the final minute and some of his shots were thumpers. The Dallas corner decided that their guy shouldn’t be in a position to absorb any more blows, and they told officials that the kid wouldn’t come out for the eighth. According to CompuBox, Ugas, a 2008 Olympian, went 136-360, while Dallas (now 23-4-2) was 46-247, against a very talented defender. 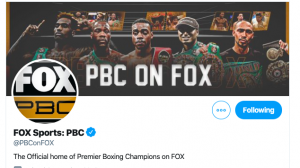 In July, Ugas scored a solid win over 28-0-1 Omar Figueroa, after raising impressed eyebrows with his March showing against then WBC 147 champ Shawn Porter. He thought and still thinks he won that one, and would be keen to rematch Porter, or get at any of the six folks rated ahead of him at welterweight by RING.

In the first, we saw the Cuban, wearing shorts with the words “Mamba Mentality” written on them, his homage to Kobe Bryant, come out with guns blazing. Power rights, a hook, then two, he was looking to be on message. Then a message that Dallas didn’t like…Ugas strayed low, accidentally, and he took some extra time to collect himself. Ugas kept blasting after that low blow, he didn’t take pity or back off on Dallas in the start of the scrap which ran on FS1. A head clash abraded Ugas, on the forehead, but it didn’t look too worrisome.

In round two, Dallas moved, slid left, and he picked up his pace to start the session, after his trainer advised him to be busier. Ugas timed a right cross, a sharp shot, and then edged in more aggressively, closing the distance. That right landed again, as Dallas froze a bit at mid range. His digging to the body, with the hook, also worked well for the Cuban.

On to the third—Dallas stayed busy, he wasn’t seeming to get demoralized. Midway through the round, Dallas absorbed another low hit…but was it? Replay showed the punch was on the belt-line. “Don’t retaliate,” ref Bill Clancy told the underdog. He didn’t, not in illegal fashion. And Ugas was in command, fighting smoothly and confidently, winning rounds.

In the fourth, Ugas stayed on form. Dallas sought to stay focused on not being a sitting target. But he’d get pinned to the ropes, and you wondered if that would occur more, as his legs got heavier? Dallas gave a decent account of himself, and you could see a judge giving him that round.  In the fifth, trainer Ismael Salas told viewers that they’d worked on the counter right, and he wants his man Ugas to not get careless. Ugas, who lives in Florida, after coming from Cuba in 2010, didn’t get sloppy or trade in willy-nilly fashion. Then, down went Dallas, off a right. It was called a slip, off a push.

To the sixth; Ugas was switching it up, his variety was admirable. Not for Dallas…But the loser kept winging it, he was throwing harder this round than the last, to start the session. Dallas’ combos lacked the zip of Ugas,’ though. Ugas’ high guard was not very permeable, and his offense was taking the zest from Dallas. In the seventh, Dallas started out lively, but his power level wasn’t in a class to really bother Ugas. To his credit, he ripped to Ugas’ body, as he had the Cuban backed into the ropes. Good round for Dallas, who maybe took the first two thirds of the round. A right hand by Ugas though with 55 seconds to go had to impress the judges, and he worked harder in the last third, to maybe take the round back.

And then, a surprise, Dallas’ crew told the ref that they were pulling the plug, and he wouldn’t come out for the eighth. The corner said that their kid was taking too many shots and they were looking out for his long term health.

SPEEDBAG: Fox boxing puts Caleb Plant on the TV stage next, with the IBF 168 champ defending versus Vincent Feigenbutz Feb. 15. That’s a home game for Plant, the action unfolds from Nashville, Tennessee. Plant is 19-0 and it feels like most are assuming Feigenbutz is an easy mark for Plant, not surprising being the 24 year old with a 31-2 mark is from Germany and is unknown basically to the US fight fan public. Savvy fights fans know just because a guy hasn’t made a mark in America, that doesn’t mean he should be overlooked.