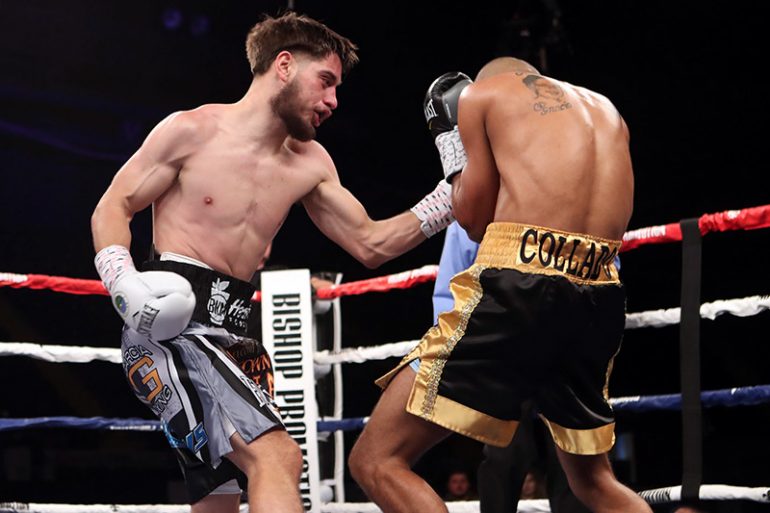 Another fight, another impressive victory for Ruben Villa.

The unbeaten featherweight prospect outboxed hard-hitting Alexei Collado over 10 rounds to win by unanimous decision Friday night at the Hirsch Coliseum in Shreveport, Louisiana. The fight was televised on Showtime’s ShoBox: The Next Generation series.

Villa, a 22-year-old southpaw who has amateur victories over WBO featherweight titleholder Shakur Stevenson and WBC lightweight titleholder Devin Haney, has looked impressive against solid opposition over the last several months. In his last bout, on September 20, Villa scored a one-sided decision victory over Jose Durante Vivas of Mexico.

Friday night was another brilliant performance as Villa, who resides in the California Central Coast city of Salinas, did not allow the hard-hitting Collado to build any momentum throughout the course of the fight. 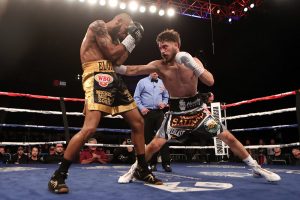 From the opening bell, Villa initiated exchanges, beating Collado to the punch. Sensing he was down in the fight, in Round 4, Collado pressed the action, but Villa easily countered him with two- and three-punch combinations to the head. Later in the round, a left hand from Villa almost knocked Collado down to the canvas, but Collado was able to remain own his feet.

Collado continued to walk Villa down, but any offense was met by accurate punches to the head. As the fight continued into the second half of the fight, Villa was effective with his ring generalship to get close enough to sit down on his punches, landing thudding right hooks to the body.

By the 10th and final round, Collado looked exhausted, mostly throwing arm punches as Villa was content to move and outbox Collado until the final bell sounded.

Villa, who is co-promoted by Banner Promotions and Thompson Boxing, has now won his last six bouts by decision.

Collado, who is originally from Havana, Cuba and now resides in Miami, Florida, drops to 26-3, 21 KOs. 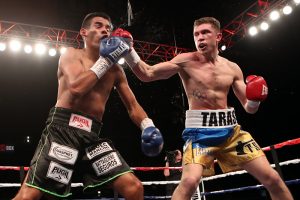 Shelestyuk, a 2012 Olympic bronze medalist from the Ukraine who now resides in Los Angeles, has fought sporadically in recent years, reportedly due to managerial issues. The southpaw fought once in 2017, had no fights in 2018, and defeated veteran Martin Angel Martinez in his last bout on Mar. 9. Veron last fought two weeks ago, knocking out Carlos Aquino in the second round.

Veron was game from the opening bell, but Shelestyuk was the more-effective fighter, easily countering with combinations to the head, finishing with straight lefts to the head.

Midway through Round 5, Shelestyuk suffered a cut on the bottom part of his forehead by an accidental clash of heads. Undaunted, Shelestyuk fought on, even momentarily stunning Veron near the end of the round.

Veron continued to press the action during the second half of the fight, but Shelestyuk continued to counter, mixing his attack to the head and body.

In the opening bout of the ShoBox telecast, lightweights Zhora Hamazaryan and late-sub Sulaiman Segawa fought to a split-decision draw. 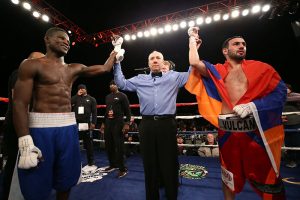 Segawa (13-2-1, 4 KOs), who is originally from Uganda and now resides in Silver Spring, Maryland, took the fight on four days notice when original opponent Jerry Perez pulled out of the fight due to an illness.

Segawa utilized his awkwardness to land wide hooks and crosses to the head of Hamazaryan during the first half of the fight. While Segawa threw and landed more punches, Hamazaryan did land connect with counter left hands to the head. The Armenia-born fighter did attempt to mount an offense after connecting to the head and body, but Segawa rallied, putting Hamazaryan on the defensive.

With the draw, Hamazaryan is winless in his last three fights.