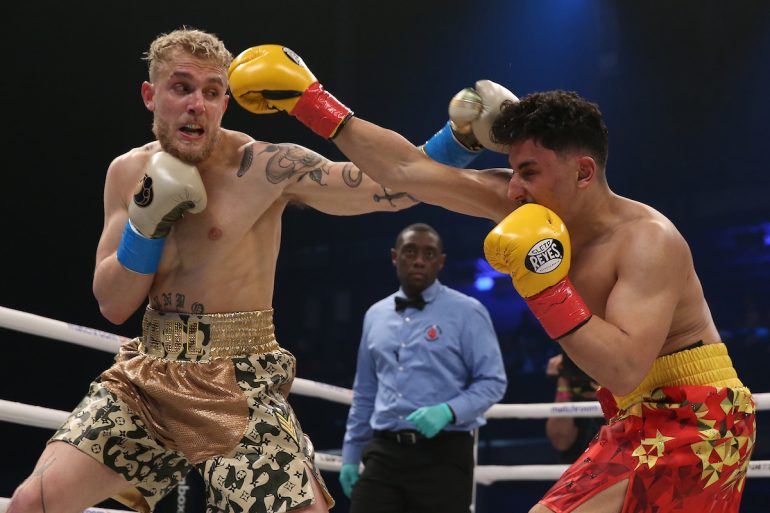 YouTube celebrity Jake Paul dominated fellow YouTuber Ali Eson Gib, stopping him in the first round tonight. His TKO1 victory clears the way for a revenge match against KSI, who scored a split decision win over his older brother Logan last November.

It wasn’t beautiful, but it was fast and decisive.

Gib, the shorter fighter, crouched and stalked forward while the taller Paul used his jab from the outside. A looping right hand dropped Gib halfway through the first round. A left hook sent Gib reeling back into the ropes about 20 seconds later, which referee Chris Young correctly scored as another knockdown. A third right hand dropped Gib once more, prompting Young to immediately wave off the bout.

Paul, who turned 23 years old just two weeks ago, made it clear what is to come. “KSI is next,” Paul said.

KSI, who was in the ring, got in his face and they jarred back in forth for a minute. The display served as the hype segment for a KSI-Fake Paul fight later this year. Jake Paul has around 20 million YouTube subscribers and KSI has over 30 million. Both have clocked over six billion views on their respective channels.

Whether it makes boxing purists cringe or not, we are going to see more of these YouTube fights on DAZN.

The six-round cruiserweight bout was part of a Matchroom Boxing card that was broadcast on sports streaming service DAZN live from the Meridian at Island Gardens in Miami, Florida.