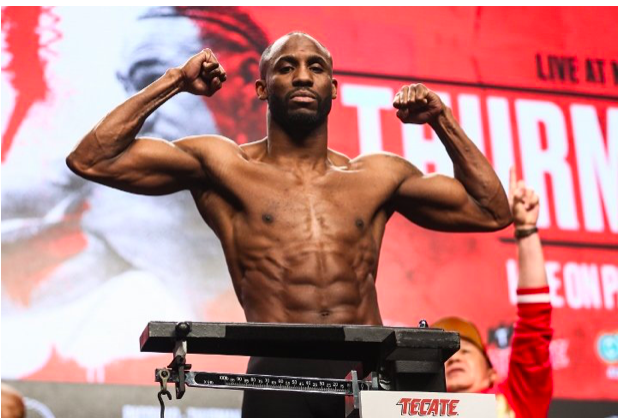 When he learned Kobe Bryant died, Yordenis Ugas flashed back, to 2013, when he was living in New Jersey, three years after jetting from Cuba to try his hand in a more permissive society.

Ugas has hacked and clawed and yes, punched his way to a respectable level of prominence, and is pretty close to advancing to a spot where he can enjoy higher level compensation, the sort which makes hard sacrifices more worth it. On Saturday night, he fights in the main event on FS1, against Mike Dallas Jr., on a PBC card…but in 2013, he was living in New Jersey.

He’d had 14 pro fights, but while he was a solid amateur, repping Cuba at the 2008 Games, he’d need to build momentum over a longer span in order to not need to do side hustles.

In Jersey, when there was enough left over, after paying rent, and he knew the Lakers were playing, he’d sometimes treat himself. There was a joint in Hoboken, he’d take the bus there, order a pineapple juice, and groove watching Kobe own the court.

He’d met Bryant, he told me in a phone chat, in Beijing in 2008. “He was so competitive, and had a great spirit,” Ugas told me. 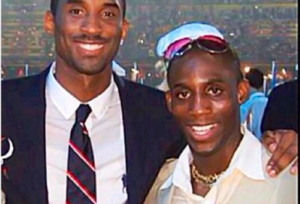 Kobe and Ugas, in 2008, at the Beijing Olympics. The boxer loved Kobe’s fire.

One of Kobe’s quotes stuck with him, and will, when he thinks of memories of the Laker icon, the baller who pulled the sled, after MJ, then Kobe, to Lebron.

“I’ve played with IVs before, during and after games,” Bryant said. “I’ve played with a broken hand, a sprained ankle, a torn shoulder, a fractured tooth, a severed lip, and a knee the size of a softball. I don’t miss 15 games because of a toe injury that everybody knows wasn’t that serious in the first place.”

That attitude, some of that Kobe grit Ugas would curry within, would keep him on an even keel when he’d get down. The Cuban wrestled with in-ring losses (vs. Johnny Garcia in ’12, Emanuel Robles and Amir Imam, back to back Ls in 2014). And then, a gut shot, no, make that a crack to the gonads.

March 9, 2019, Ugas was the designated B side, truth be told, an “easy one” for Shawn Porter. OK, that’s maybe overstating the case, but Porter was favored, and pundits figured Shawn would continue the solid run after his loss to Keith Thurman. He boasted wins over Andre Berto, Adrian Granados, then Danny Garcia. Then Ugas gave him some of the business in Cali. It went to the cards, and it was a split decision. Two judges saw it for Porter, one for Ugas, and plenty of watchers thought the Cuban-Floridian deserved the nod. Hey, most of us know how things work, right? The name guy is usually going to get the benefit of the doubts…and Porter did. And Ugas hurt.

I was curious, though, was he over the defeat to the then WBC 147 champ?  Or, over it enough to be able to work with his head screwed on straight, and not leak energy by perseverating on a perceived injustice?

“I was definitely frustrated after that fight, I did all I could, I prepared over a year for that fight,” the 33 year old Ugas told RING.  “But now I know, I will keep fighting strong, even though I got robbed. Am I at peace with it? I feel that a year has passed and I’ve been able to overcome some of that, focusing on what’s ahead…and with God’s blessing I will win the fight versus Dallas. My lifelong dream ever since I first laced up a pair of gloves was to win a world title. I’ve come so close to accomplishing that dream, but for some reason I’ve come up short. I’m determined to be the best fighter I can be, and I know in my heart that I’m one of the best welterweights in the world. My goal is to become a world champion in 2020.”

I think Ugas (24-4 with 11 KOs) wrestles with the Porter loss, what could have been, a bit more than he cares to admit. Check out this recent Tweet: 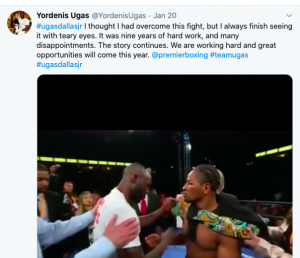 The in-ring losses can make the sacrifice he made to re-locate, to America, sting harder. He is the only son to mom and dad, in Cuba. When you bolt, as Ugas did, you are not permitted to come back to Cuba, for 8 years. The years sometimes ticked by slowly..but finally, the ‘do not return’ period passed. He hadn’t seen the fam in nine years, and in early December, 2019, Yordenis traveled back to the homeland. “I’m their only son, it was emotional,” he shared.

And then it was back to America, to the training grind. (Ismael Salas is his instructor.) A win over Dallas gets him closer to a bigger money fight. He’s rated No. 7 at welterweight by RING (see below, left), and while not looking past Dallas, admits he’d like a crack at Spence. He’s not picky, he sees Pacquiao, Thurman, Porter, Danny Garcia, and would be happy to tango with any of them. 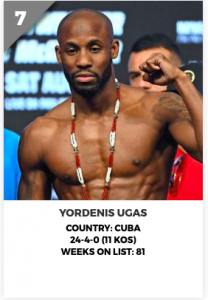 “How good is Dallas? I think he’s up for a good fight, is a motivated fighter, and knows he’s fighting one of the best fighters. He is a very skilled fighter who’s been in the ring with some very good opposition,” said Ugas. “He’s a crafty veteran who I know is coming to fight with all his heart. His only losses have come against top fighters. I’m taking this fight very seriously and I’ll have to be on my game to really make a statement. I had a really good camp!”

Ugas, who did the camp in Vegas, feels like he’s made a leap, his last three fights especially have shown that, and feels he’s a top 5 welter, right now.

Dallas (23-3-2 with 11 KOs) is stoppable, Josesito Lopez and Lucas Matthysse did it, in 2011 and 2013 respectively. Ugas’ power is maybe roughly comparable to 2011 Herrera, so I’d more so wonder not if the Cuban will win, but in what manner. The 33 year old Dallas is 4-0-1 since the Matthysse loss, but his triumphs are over lower grade testers and he’s fought on average of once a year since 2015.

If Ugas is a “video guy,” he’ll note that Matthysse used smart timing as Dallas slid forward, to get in his face, and Lucas did a dip, back a smidge, and rip, with a right hand counter. Dallas was out on the way to the mat. Ugas could well see that Dallas has a tendency to go into an ultra brief trance, he’ll be in front of Ugas, static, hands not busy, eyes not fixed on his target, his defensive awareness at an ebb. Maybe Team Ugas watched the loss to Josesito, and believe that their guy can and will win be upping the ante on aggression, and if he bullies Dallas like Lopez did, that’s a pathway to win No. 25.

Yes, Dallas is the clearly denoted B side here. But it doesn’t sound or seem like Ugas is assuming he will win in a walkover.

He’s upbeat, and that mindset is aided by his attitude of gratitude. Me and him talk about it–I often see emigrants come here and have a better attitude than those born here. They’ve come from humbler places, don’t take freedoms for granted, appreciate a system that better rewards those who combine talent and grit and grinding, to elevate their economic standing. “I’m a free man in a profession doing what I love!”

Porter saw a guy who combined solid footwork with above average hand speed. Ugas slips and rolls with punches pretty good, is sneaky getting angles on you. In round 12 versus Porter, his hand speed was still there, he was still looking to advance, take it to Porter. He acted like he was no B sider, fought like it too.

Ugas rebounded with a win over Omar Figueroa, so, no, he wasn’t gifted with a gimme assignment after that Porter disappointment.

Me, I think Dallas will make Ugas look solid, as he showed versus Omar, in a wide UD. What does Ugas think? “I feel like it will be explosive, and entertaining fight! I like the combat.”

ABOUT UGAS VS. DALLAS
Ugas vs. Dallas will pit welterweight Yordenis Ugas against Mike Dallas in a 12-rounds (or fewer) bout that headlines FS1 PBC Fight Night and on FOX Deportes Saturday, February 1 from Beau Rivage Resort & Casino, an MGM Resorts property, in Biloxi, Mississippi.