Murodjon Akhmadaliev: ‘I think that Daniel Roman is the most proven champion – this motivates me a lot’ 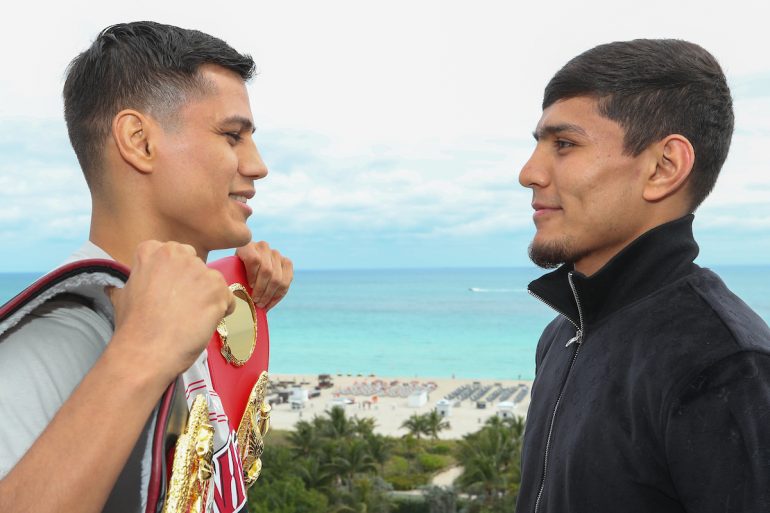 Akhmadaliev had been due to face Roman last September before a shoulder injury curtailed the unified titleholder. The 25-year-old Uzbekistan-born fighter, who is the WBA mandatory challenger, took a stay-busy fight (TKO Wilner Soto) but now gets his chance on a pre-Superbowl card.

“It’s a big honor and a great opportunity for me to prove that I’m the best fighter in the 122-pound division,” Akhmadaliev (7-0, 6 knockouts) told The Ring through Alik Frolov. “I think that Roman is the most proven champion and he is a unified champion – this motivates me a lot.

“I think Roman is good all around; very composed, good power, good chin, experienced and a true warrior. But in the ring I will implement my game plan. We have something that we are working on with [my trainers] Joel and Antonio [Diaz].”

Akhmadaliev, who was the subject of a New Faces feature earlier in his career, believes that his amateur pedigree, which yielded silver at the 2015 World Championships and Olympic bronze at Rio 2016, will be key to his success.

“We wanted to fight [Roman] in the previous fight, but they made a unification fight with [TJ] Doheny and we didn’t object,” Akhmadaliev said. “I only have seven pro fights and Danny has around 30, but I have had over 350 amateur bouts and numerous WSB fights, around 100 of them against the very best fighters in the world. I doubt that Roman has more than 50 amateur bouts. I love fighting, that’s the only thing I did all my life, inside and outside the ring.”

In September 2017, Roman defeated WBA “regular” titleholder Shun Kubo in Japan. During his reign, he was upgraded to full titleholder and posted wins over Ryo Matsumoto, Moises Flores and Gavin McDonnell to set up the Doheny unification bout last April. Roman dropped the IBF titleholder twice en route to a 12-round majority decision win in one of the best fights of 2019.

Vadim Kornilov, Akhmadaliev’s manager, has worked with Dmitry Bivol, Ruslan Provodnikov and Viktor Postol, among others. He has also been instrumental in bringing several top Eastern European fighters to America, where they’re being fast tracked toward world title opportunities.

“We are very excited because these guys coming from Uzbekistan and Russia are all exceptionally talented fighters,” said Kornilov. “By working with our team, which has developed and grown due to very motivated and professional people like the Diaz brothers and our partners, I believe most of these guys are world champions in the making.”

Joel Diaz is high on Akhmadaliev’s talents and feels this fight will go some way to proving what he feels is obvious.

“I know that there is no one at 122 pounds as good as M.J.” said the venerable trainer. “I’m pretty sure that M.J. will beat all the champions at 122 and move up. I’ve known Roman for a long time and he’s a very good fighter, a unified champion, but I know what M.J. is capable of.

“Roman has never fought anyone with the style and power of Murodjon. On the other hand, Murodjon has seen all different styles. Roman is good all around, style-wise he’s not a brawler or a boxer, always mid-range – a very basic fighter. Murodjon will win by KO before eight rounds.”

This bout plus Demetrius Andrade vs. Luke Keeler, Tevin Farmer vs. Joseph Diaz and Jake Paul vs Ali Eson Gib will be televised on DAZN in the U.S.A. and Sky Sports in the U.K.