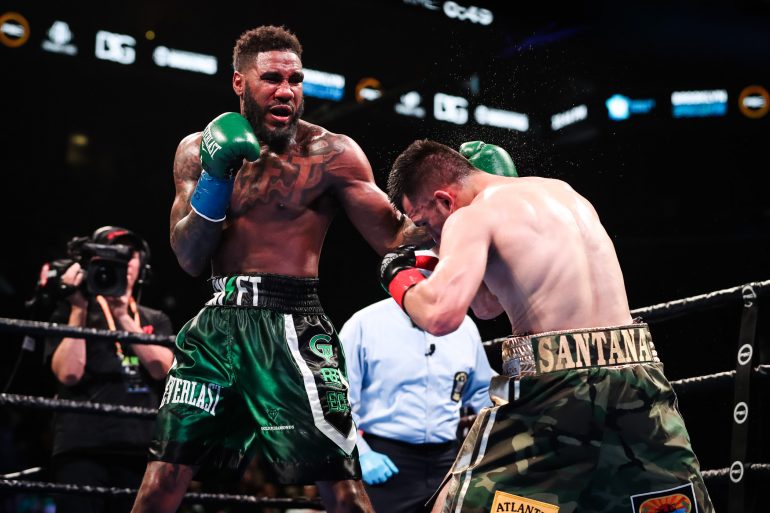 BROOKLYN, NY — Space between Jarrett Hurd and another fighter used to be a rare sight. “Swift” liked fighting in the proverbial phone booth. He had a penchant for excitement. That approach, Hurd would be the first to admit, would make fights far tougher than they had to be.

More so, Hurd felt he had to change after suffering his first loss last May to Julian “J-Rock” Williams when he lost the IBF, IBO and WBA 154-pound belts.

Call Francisco Santana a trial balloon to measure how much of the “new” Jarrett Hurd (24-1, 17 knockouts) took root.

For one, Hurd used his jab far more than he had in recent memory. There was something else, too, space between Santana (25-9-1, 12 KOs) and Hurd.

Working under new trainer Kay Koroma, Hurd passed the first phase of this experiment with an easy 10-round victory at a 156-pound catchweight on Saturday night at Barclays Center under the Danny Garcia-Ivan Redkach title eliminator on Showtime Championship Boxing.

“We came out here and did what we wanted to do,” Hurd said. “The crowd didn’t love it, but you gotta understand, I got the unanimous decision and I did what I wanted to do. There was definitely no frustration. We didn’t want to go toe to toe and we didn’t want to make this a risky fight.

“We’ve moved on from the Julian Williams fight. We came out here, we had a long lay-off and we got the job done.

But the “old” Jarrett Hurd did surface, like in the fifth, when he stood there with Santana in the middle of the ring and the two slugged it out, when Hurd landed a right uppercut, jolting Santana’s head back.

In the sixth, Hurd’s movement slowed. That gave Santana a chance to crack Hurd with a few shots, though not enough to really hurt Hurd.

The fighters drew a smattering of boos as the seventh came to a close, though it was pretty apparent, that whatever style Hurd utilized, he was effective—and well ahead.

A Hurd right uppercut dropped Santana in the last 10 seconds of the 10th.

By then, it was academic.

Also, on the undercard, Stephen “Cool Boy Steph” Fulton had a coming-out party. The Philadelphia junior featherweight is one of the best-kept secrets in boxing—but he made himself pretty known by dominating the previously undefeated Arnold Khegai (16-1-1, 10 KOs) in a 12-round unanimous decision.

Behind a consistent, steady jab, Fulton (18-0, 8 KOs) put on a great display of boxing, outclassing Khegai in 12-round super bantamweight bout, winning by scores of 117-111 on the scorecards of judges Waleska Roldan and Frank Lombardi, and a 116-112 tally by John McKaie.

Roldan and Lombardi had Fulton winning five of the last six rounds.

“I felt great against a tough opponent,” Fulton said. “I stayed on my boxing, kept him off his game and pulled a victory out. I knew he was a rough and tumble customer, so I just had to keep my composure.

“That’s what I do. I use my jab. I tried to utilize the jab all night and win the fight behind the jab. I showed that I’m ready for a world title next. I stayed smart and kept boxing. I used my jab in every round and that’s why I pulled the victory out.

“It feels good to get this win. We’ve been through tough times and fought tough opponents. I’m proud of my team for staying together. We’re Philly strong.

“I want that world title. I’m going to train even harder for my next performance so if I have to dog out it out even more, I’ll be ready.”

Early on, it was Khegai playing the role of stalker, forcing Fulton backwards. Fulton made him pay on occasion with the jab as Khegai charged ahead. Khegai tried going to the body, and there were a few times he landed.

By the midway point of the fight, Fulton found a rhythm that was frustrating Khegai, who resorted to hitting Fulton late after the breaks and hitting him on the back of his head.

With 1:09 left in the ninth, Willis warned Khegai about hitting Fulton in the back of the head. After nine, it was easy to see Fulton far ahead.

With 2:35 left in the fight, Khegai landed a big right that Fulton took. Fulton stayed within himself, remaining calm in his boxing bubble. And by the middle of the round, Fulton regained his cadence.

Welterweight Keeshawn Williams (7-0-1, 2 KOs) pounded on Gaku Takahashi (16-11-1, 8 KOs) for eight rounds to win a unanimous decision. Takahashi, bloodied and terribly outclassed, gave a great effort in the loss. Williams was simply too strong and too fast for the Japanese fighter.

In a six-round middleweight fight, Lorenzo Simpson (7-0, 4 KOs) won a unanimous decision over Antonio Hernandez (2-12-1). The fight may have been more difficult than Simpson anticipated. Hernandez stung him at times, though Simpson was in control for the majority of the six rounds.