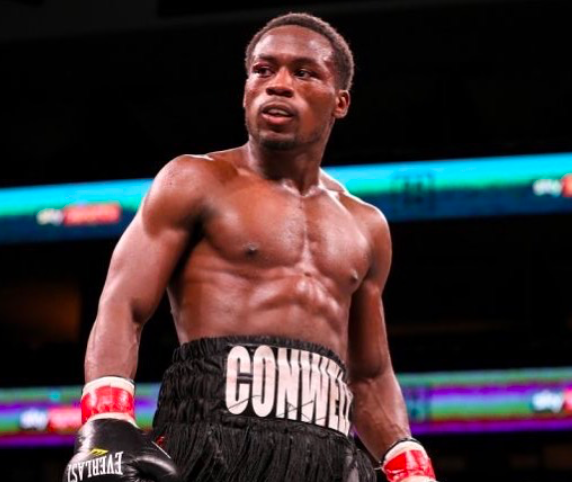 Charles Conwell was 10-0, his stock was rising, and he was matched, on paper, with his stiffest test since turning pro in 2017.

The Ohio resident looked forward to tangling with Patrick Day on Oct. 12, 2019, at Wintrust Arena in Chicago, on a card topped by Dmitriy Bivol. A win here would mean another uptick in the ratings, and moving closer to those more meaningful fights, which offer paydays which make this dark trade much more worth it.

And the brand of effort Conwell showed those in the building and watching on DAZN, that would have given him the buzz bump exactly as it would have been scripted …but no. 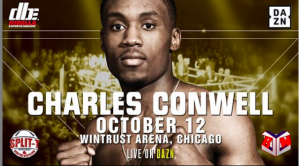 His punching power, and finisher’s instinct didn’t just supply him with a KO win over Patrick Day, it contributed to a lightning bolt thrown by fate. His life, from that moment that Day hit the canvas, unconscious, never to regain his senses, had changed, irrevocably.

Most of the focus was on young Mr. Day, by all accounts a wondrous human being, as you couldn’t find a single soul to say anything negative about the Freeport, Long Island, NY pugilist, as we followed his fight to stay alive. Day passed away on Oct. 16, and one couldn’t help but wonder—how would the guy on the other side, Conwell, react?

Would he or could he soldier on in the sport? Would he feel guilty, would he be “gun-shy” if he did indeed return to the squared circle?

I asked the 22 year old Conwell, point blank, how are you doing, in regard to what happened on that night in Chicago.

“I’m better, mentally, emotionally and physically,” the boxer told me. “I get better every day. It’s something that you can never get over, but you can learn how to deal with better. So, I think that’s what’s going on with me, I’m mentally feeling better, I’m ready to get back in the ring, back focused, back to the game plan, back to my old way.”

Impressive, his mindset; so, how has he coped? Conwell said he tries to keep positive, stays close to family and close friends. Don’t stay alone, stuck in your own head, he advised, to people who have or are dealing with a similar trauma.

And, does he WANT to talk about it? No, he doesn’t want everyone to be bringing up the tragic fight…but he will process his feelings, with trusted people, when he gets a reminder. I even asked him…How should a new acquaintance deal with “it.” Don’t blurt it out, Conwell said, don’t blunder into the subject, too quick, too nosy.

And what about that first time back in the ring, staring at a live body…was that weird? Was he gun-shy?

“My coaches said I was holding back a little bit, but when I first got in there, I didn’t feel like it. So, I just had to mentally tell myself, alright, you gotta get back focused…You gonna be in the game, you gotta take the game seriously and take it a hundred percent, or something’s gonna happen to you. So you just gotta get back, get focused, you don’t want it to happen to you, so you gotta stay focused and ready at all times.”

I drift back to 2005, I was ESPN Magazine, and we ran a feature on George Khalid Jones. The light heavyweight Jones was on the other side, he was the one whose hands did the damage, he sent Beethaeven  Scottland to the hospital, where Bee perished from brain trauma in a bout that unfolded in New York, and ran on ESPN, June 26, 2001.

The widow Scottland some time after her man’s run ended, she got in touch with George. “I don’t blame you… Don’t give up,” she told him. “I know boxing is your dream. I know Bee would want you to keep going. Don’t stop.”

He didn’t; six months after he was arbitrarily selected by the fates, Jones gloved up again, against Eric Harding. It didn’t feel right, he pulled punches. Harding sensed it, pressed the issue, and handed Jones his first loss, via knockout, in round seven.

It took Jones maybe three years to shake off the shadows sitting on his back. He went 7-3-1 after his fists damaged a man, fatally. Impossible to say how his legacy would look if that “win” over Scottland didn’t come with such a savage asterisk. Jones went 15-0 as he stepped onto the USS Intrepid, and scored a mixed message victory, TKO10.

The tragic fight that maybe the largest percentage of fight fans know occurred Nov. 13, 1982. That bout, pitting ascending superstar Ray “Boom Boom” Mancini against unsung Korean Deuk-Koo Kim, saw Mancini clash against a man with nothing to lose, the most dangerous sort. Kim was fighting for his professional life, this was his one shot, he knew, and he’d be willing to die along the way, as he went at it with the fighting pride of Youngstown, Ohio. In round 14, Boom Boom landed telling blows, ones which knocked Kim out, and four days later, rendered him deceased.

Less than three months later, Mancini gloved up again, against a journeyman, 16-7 George Feeney. Sagely, planners placed Mancini’s ring return in Italy, away from an imminent media swarm of curious vultures. ”With everything that happened, I was under a lot of pressure,” Mancini said after, to the NY Times.  ”I’m very happy it’s over, very relieved. I need mental relaxation now. I had a lot on my mind before this fight.”

Boxing is a complex and trying sport, without having to deal with the mental and emotional baggage that Jones, that Mancini, and a Conwell are saddled with. ”I thought I was getting Kim’s death out of my mind. I know it’s human nature to bring it up to me again now that Kim’s mother is dead,” Mancini told the Times after learning that Kim’s mom had killed herself, the grief too heavy, by drinking pesticide. “No matter how much is past, I guess it’s never past. I’m trying to be the best champion I can but it seems like I’m going to be forever linked to Kim’s death. Is this what people are going to remember about me? Or are they going to remember me as a good champion?”

Indeed they and we will, but yes, it wouldn’t be candid to say that for people of a certain age, Kim will forever be at the top of the list of recollections when we ponder Boom Boom’s legacy and life. That is what it is….And he does not and cannot live his life through that lens.

So, I wondered, will Conwell keep thinking about Patrick, or try to move away from that? Conwell said he thinks and hopes he will feel “his power and his encouragement” from Patrick, “upstairs.”

Briefly, yes, Conwell did ponder walking away, finding another way to make a living, something less risky. But he’s fighting on for his legacy, and, in fact, to honor the memory of Patrick.

Is that what Emile Griffith did, after boxing smartly and then brutalizing Benny Paret in their third and final match, March 24, 1962, at Madison Square Garden?  Griffith pummeled Paret in the corner, in round 12, like it was personal, not business, because it was, Paret had called him a maricon. 29 unanswered punches, did Paret owe ref Ruby Goldstein money? Almost four months later, Griffith got back on the horse, meeting Ralph Dupas, in Vegas. 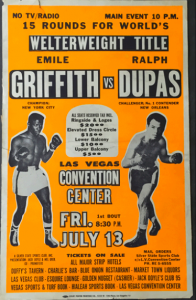 He beat Dupas, by decision. The bout was not televised, the planners giving Griffith the dignity of space. “I know I have to fight two persons in the ring that night, Dupas and myself,” said Griffith before he returned to the ring after the incident he’d call “The Accident.”

And yes, Griffith kept at the boxing, he kept plying the trade until 1977.  “After Paret, I never wanted to hurt a guy again. I was so scared to hit someone. I was always holding back.”

Conwell will know if he feels an unpleasant urge to hold back, hesitate, when he gets back to the ring, on Feb. 8, in Indiana. 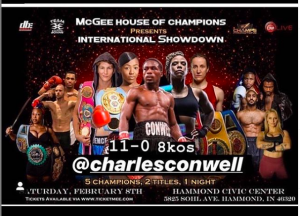 Yeah…so, should we call it a “comeback,” or nah?

“No, it’s not a comeback for me, it’s just getting back into the groove,” Conwell finished. “It’s more of a mental battle…Just continuing back on what I been doing.”