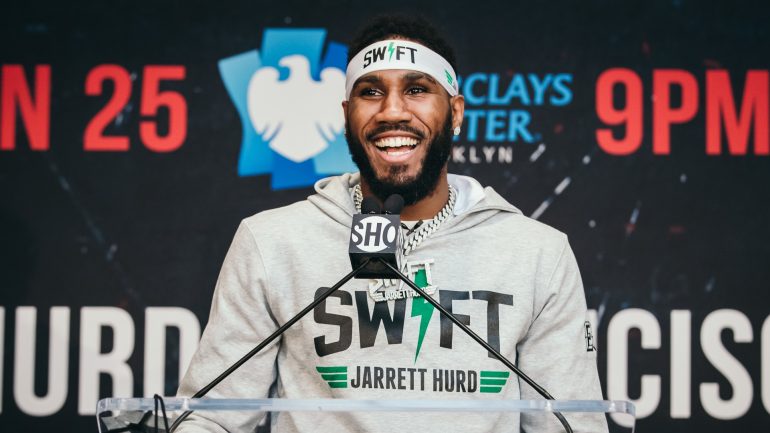 NEW YORK — Jarrett Hurd was lost, a shadow of the confident person he used to be.

The shockwaves of suffering his first pro defeat — and losing his grip on the WBA (Super) and IBF junior middleweight titles — were still reverberating through his body last May when another blow rocked him.

On vacation, attempting to clear his mind from the unanimous decision fall that Julian Williams handed him on May 11, 2019, Hurd’s cell wouldn’t stop ringing.

Hurd fought the urge to answer until incessant calls from his mom made that impossible. He picked up and was informed on the other end about an interview with his longtime trainer, Ernesto Rodriguez, floating around social media. Hurd checked out the clip and saw Rodriguez dishing stinging criticism about his own charge.

Hurd, 29, parted ways with his trainer of 12 years shortly thereafter. Just like that, “Swift” had lost his first pro fight, his longtime trainer and the gym he called home for so long.

And he didn’t necessarily have the luxury of time either, considering his rematch with “J-Rock” was looming, slated for Dec. 14.

Searching for a new trainer and gym, Hurd knew he had to make more changes.

He made another one by chopping off his gold Mohawk. (And for the record, he swears he did it before Odell Beckham Jr. did the same).

Chapter 2: A Fresh Start ✂️ #SwiftNation #SwiftPromotions I have to leave the past behind me. Time to get back what’s mine. ⚡️ Can anyone spot the one dread I had? Lol

Still without a trainer in September, though, Hurd decided to withdraw from his bout with Williams. Pulling out of the fight led to more harsh criticism and speculation — this time from boxing pundits and fans alike.

However, when speaking with Sporting News earlier this week, Hurd said his reasoning was simple.

“We had a rematch clause — December 14,” Hurd began telling SN after his media workout at Gleason’s boxing gym Wednesday. “But because I had to switch trainers, I wasn’t in the gym, I was still looking. I felt like it was more important for me to find the right trainer and get back to who I am than to rush back into a fight with J-Rock.

“Not being in the gym, searching around at the time,” he continued, “it wasn’t smart for me to go into the rematch.”

The former unified junior middleweight world champion eventually joined forces with trainer Kay Koroma and the two hit the Olympic Training Center in Colorado Springs this past fall to work together. Their chemistry was rather “Swift,” Hurd said.

“Me and Coach K, it took only seconds when we first met and got together for us to click,” Hurd said. “The communication has always been there. It’s like family to me. It wasn’t anything that took time to get to — it’s already there.”

Koroma had been in favor of Hurd having a fight before trying to snatch his titles back anyway, and now the 29-year-old will have just that. “Swift” faces Francisco Santana in the co-main event of Danny Garcia vs. Ivan Redkach at Barclays Center in Brooklyn on Saturday night.

The timing is rather intriguing considering it comes exactly a week after an unexpected shocker blasted the 154-pound division.

Last Saturday night, Williams, in his first defense of the IBF/WBA titles, was pummeled toward a fifth-round TKO by underdog Jeison Rosario. Williams suffered the defeat in his hometown, just as Hurd had lost to “J-Rock” in a homecoming bout.

Assessing the strange twist of events, Hurd believes Williams suffered the same fate that he did last spring — being victim to an off night.

But Hurd’s off night still resulted in an action-packed 2019 Fight of the Year candidate that Rosario’s destruction of Williams didn’t come close to. But here they all are, with Hurd set to face Santana and Williams having since activated his rematch clause with Rosario. The other side of the junior middleweight picture has Patrick Teixeira reigning as WBO champion and Jermell Charlo as the WBC titleholder. Hurd has reviewed it well.

Santana (25-7-1, 12 KOs) is a journeyman who hasn’t been able to get over the hump against superior boxers such as Jose Benavidez Jr., Jermell Charlo or Williams, but he fought them all hard and took each the distance. He knows that he’ll again be an underdog against Hurd (23-1, 16 KOs).

“I said at the last press conference that no one gives me a shot to win,” Santana said Thursday during the final fight news conference at The Tillary Hotel in Brooklyn. “I was checking the betting spread and I’m a big underdog. They think I should just stay home, but everybody knows I come to fight. Regardless of whether I’m the underdog or not, I’m going to bring it.”

After losing to Williams last spring, Hurd won’t take Santana lightly, especially considering that he knows this fight will be a springboard back into the title mix. After all, that’s the whole reason that “Swift” decided to stay put at junior middleweight instead of moving up to 160 pounds.

“Unfinished business,” Hurd told SN with a smile. “I was so close to becoming undisputed at 154. That’s something I always wanted to accomplish. It’s a big dream of mine.”

And that dream has a lot more to do with fighting legacy than the boxer who sings “Mr. Get That Bag.”

“The money’s there, I’m at the top of the highest level you could be at,” Hurd said. “Now, it’s more trying to build my legacy. It’s not about finances, it’s not about anything like that.

“It’s more of becoming after boxing, ‘That guy’s ‘Swift’ Jarrett Hurd’ — I want you to still talk about him,” he added. “That’s what I’m focused on and conquering the 154-pound division is something I want to do before I hang it up.”