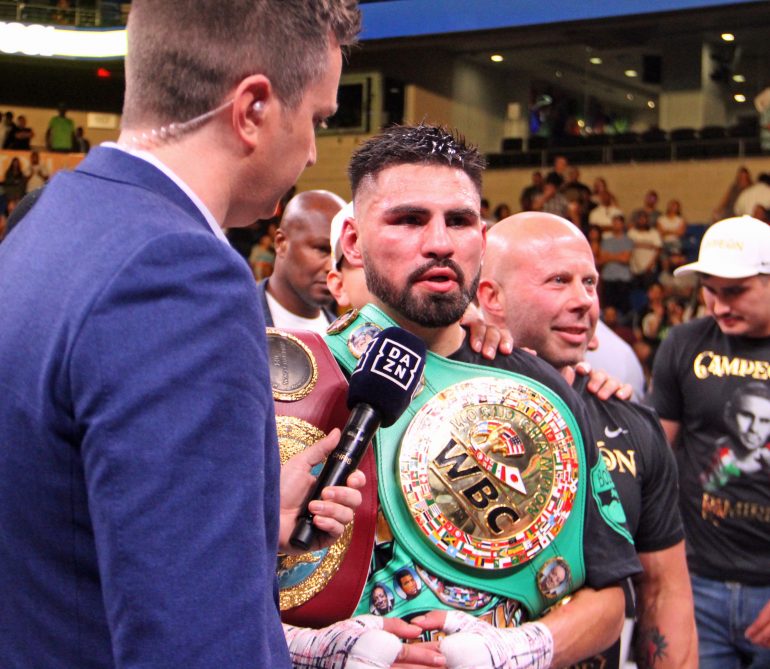 Photo from the WBC
23
Jan
by Ryan Songalia

Jose Ramirez and Viktor Postol will have to wait for a new date and fight location after their ESPN headlining bout was postponed due to an outbreak of coronavirus in China.

The bout, which would be a defense of Ramirez’s WBC/WBO unified junior welterweight title, was originally scheduled for Saturday, Feb. 1 at Mission Hills Haikou in Hainan, China. A new venue and date are still to be determined, a press release from Top Rank issued Thursday night read.

“The health and safety of our fighters and everyone working on the event is the most important thing,” said Top Rank chairman Bob Arum. “We hope the situation is brought under control soon. We look forward to staging events at Mission Hills Haikou in the very near future.”

The illness has symptoms similar to flu, including coughing, fever and difficulty breathing, and has proven deadly, with 25 deaths and approximately 830 infected, according to Chinese officials.

The fight location is far from Wuhan in Central China, where the current outbreak originated. Six cities, all in Hubei province, have been effectively put on lockdown, but the virus has been spreading quickly, with several countries reporting cases from people who had traveled to the area.

Ramirez (25-0, 17 knockouts) of Avenal, Calif. was heading into his fourth defense of the 140-pound title, and first defense since unifying with a sixth round stoppage of Maurice Hooker to annex the WBO belt last July.

Postol (31-2, 12 KOs) is the no. 1 rated contender at 140 pounds by the WBC, and had previously held that sanctioning body’s junior welterweight title before losing to Terence Crawford in a 2016 unification fight.

Ramirez-Postol isn’t the only boxing event that had to be rescheduled due to the outbreak.

The Asia-Oceania Olympic qualifier, scheduled for Feb. 3-14 in Wuhan, was canceled, and will be rescheduled for a later date.