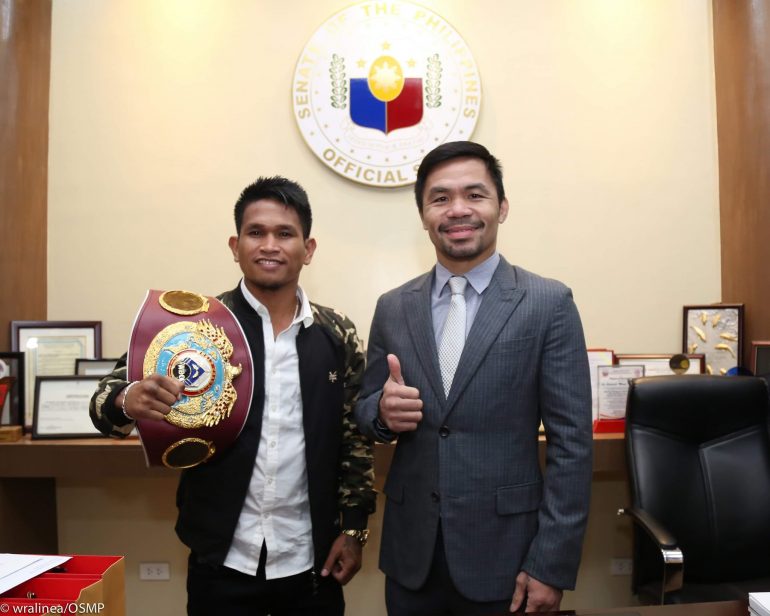 Casimero with his promoter Manny Pacquiao at Pacquiao's office in the Philippine Senate. Photo by Wendell Alinea/OSMP
22
Jan
by Ryan Songalia

There was no one more excited to read the news today about the possibility of a Naoya Inoue vs. John Riel Casimero unification bout than Casimero himself.

The WBO bantamweight titleholder hadn’t let the sweat dry from his body after lifting the title against Zolani Tete in November before he started calling for the unbeaten star from Japan.

“It feels great. I want to shock the world!,” Casimero (29-4, 20 knockouts) told The Ring Wednesday evening. The 30-year-old from Ormoc City, Philippines was reacting to a story by reporter Keith Idec stating that an official announcement for the fight, which would bring together three of the belts at 118 pounds, would be made in the coming weeks.

April 25 is the target date for Inoue’s promotional debut with Top Rank, with Las Vegas being the target city, according to Idec’s report.

A Facebook post made by Casimero conjoined his nickname – Kwadro Alas, or Four Aces – with another one specifically relevant to this fight – “Monster Killer.”

“Fight of the year, two champions in their prime,” said Gibbons via text message from the Philippines.

Trainer Nonoy Neri says they will train in the United States for this fight, and Casimero says he has already obtained his visa for the trip.

“It’s gonna be a tough fight for Casimero. He needs to train hard for that fight because Inoue is not an easy opponent,” said Neri, a long-time assistant for Pacquiao.

“Casimero is a tough fighter also. He has the power and experience and he is a world champion but training is the most important in order to beat Inoue.”

Inoue (19-0, 16 KOs) is coming off his toughest fight to date, a unanimous decision win over Nonito Donaire Jr. on Nov. 7 to unify his IBF belt with Donaire’s WBA title. Inoue scored the fight’s only knockdown in round 11, but sustained a broken orbital bone and nose.

The fight was named “Fight of the Year” for 2019 by the Boxing Writers Association of America, and was only the third fight to take place outside of the United States to earn that distinction since the organization began handing out the laurel in 2002.

Both Casimero and Inoue are three division champions, with Casimero having won titles at junior flyweight and flyweight before moving to bantamweight, and Inoue picking up belts at 108, 115 and 118.