Mairis Briedis and Yuniel Dorticos face-to-face in Riga: ‘We are going to see a war’ 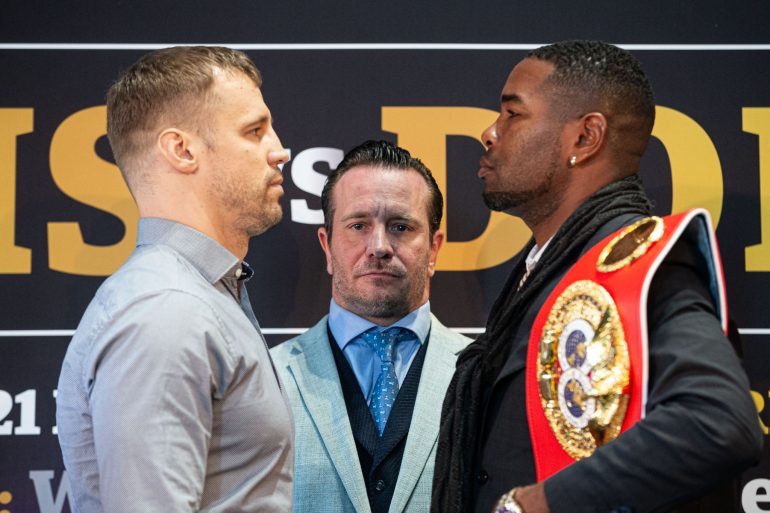 “It’s great to be in Riga,” said Kalle Sauerland, Chief Boxing Officer of the World Boxing Super Series. “It’s an amazing opportunity to present the final for the biggest and greatest prize in boxing.

“We present the two greatest cruiserweights on the planet. The two best sportsmen of the division. Two guys who have been there and done it all before. We, the WBSS, are so proud to be working with these athletes fighting for a trophy in the name of Muhammad Ali, the greatest of the sport.

“The tickets are flying and we expect to sell out within hours if not days. It’s going to be an epic event. We are going to see an absolute war on March 21!”

Dorticos, the Miami-based Cuban holding the IBF title, was oozing confidence on the stage.

“I’m excited to be here, I feel like I’m at home here in Latvia,” he told. “My prediction is simple; on March 21st you will know why I’m called the ‘KO Doctor’. I’m humbled to be part of this tournament and fight for the Muhammad Ali Trophy. That trophy has my name on it and I’m going to take it home.”

Briedis responded to Dorticos’s prediction by revealing a nickname from earlier in his career.

“My nickname used to be the ‘Traumatologist’,” the Latvian told. “Two doctors are going to face each other in the ring, so let’s see who comes out on top. To win the trophy would be a great celebration for Latvia, but now it’s about putting in the hard work to not let anyone down.

“I believe we can expect a great fight because my opponent is a great fighter. I hope he is not just a loudspeaker…

“I’m happy the fight is taking place in Riga. It’s additional weight on my shoulders, but we’ll be ready!”

Tickets for the incredible Mairis Briedis vs Yuniel Dorticos Ali Trophy showdown are on sale from €29 via bilesuserviss.lv and WorldBoxingSuperSeries.com. The final will be broadcast live on DAZN in the U.S. Fans can visit DAZN.com or download the DAZN app to their preferred connected device.

The Road to Riga:
Mairis Briedis and Yuniel Dorticos took parallel routes to the cruiserweight final of the WBSS. Briedis beat Noel Mikaelian on points in his quarter-final in Chicago and stopped Krzysztof Glowacki in Riga via TKO in the third round of a dramatic semi-final. Dorticos claimed a points victory over Mateusz Masternak in Chicago and a 10th round knockout of Andrew Tabiti in Riga – a KO that earned the ‘KO Doctor’ the ‘Knockout of the Year’ prize across multiple media.