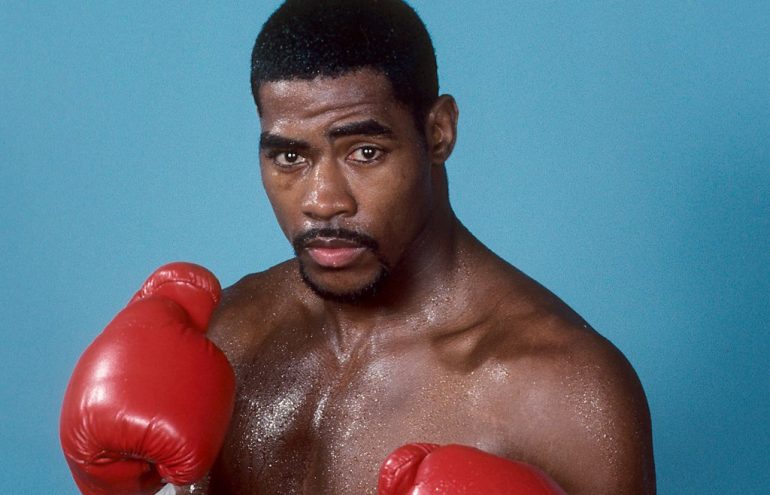 Photo from The Ring archive
21
Jan
by Anson Wainwright

Tom Johnson was a skilled but underappreciated craftsman who held a featherweight title in the mid-1990s. He made 12 successful defenses of his IBF belt over a four-year period before age and burgeoning superstar Prince Naseem Hamed caught up with him.

Johnson was born in Evansville, Indiana on July 15, 1964. His father was killed when he was nine-months old, leaving his mother to raise him and nine other children. Johnson and his twin brother were the youngest.

“I didn’t have a hard life,” Johnson told The Ring. ” My mother did the best she could do and did a wonderful job raising us. I grew up in the projects, typical neighborhood, but the good thing was everybody got along with each other, everybody looked out for one another.”

As a child, Johnson played several different sports but it wasn’t until he found boxing at 15 that he found his vocation.

His coach took a team to another gym and the fighters faced off. Johnson’s team won 9-1, however, he was the only loser and the other children teased him. The youngster learned a hard lesson, trained hard and two weeks later faced the same rival. This time Johnson stopped him.

Johnson graduated from high school in June 1982. He enrolled in basic training for the army, as part of the buddy plan with his twin brother Tim, and was based in Fort Sill, Oklahoma as part of the infantry division. After decided the army wasn’t for him and was eventually discharged in 1985.

He knew he wanted to box and after winning the Black Expo in Indiana caught the eye of legendary trainer Emanuel Steward, who told him, ‘If you want to turn pro, come to Detroit.’

Johnson took up Steward’s offer but was in for a rude awakening that stood him in good stead for the rest of his career. When Steward found out Johnson didn’t win any national titles, he was skeptical of his chances in the pro game.

Johnson turned professional – after going 140-16 as an amateur – in October 1986. “Boom Boom” regularly visited the famous Kronk to spar and watch other top fighters. He won his first 19 fights before tasting defeat for the first time.

“I lost my 20th fight to Harold Warren,” said Johnson. “I was mad at everybody because I didn’t know I was boxing a southpaw. I was told he switches to southpaw every now and then but that wasn’t true – he was a southpaw.”

One win later, Johnson was given the opportunity to face the rugged Troy Dorsey, who he’d previously beaten. Dorsey was now world ranked and Johnson knew a good performance would enhance his own prospects. The two fought to a draw but as Johnson predicted it helped move his career forward. Over the next year, he won five fights, all inside the distance, to earn himself a world title shot against Manuel Medina.

“We headbutted, he got cut in the ninth round and could not continue,” said Johnson, who lost via technical decision in Inglewood, California in November 1991.

“I think out of all the fights in my life, I learned something in that fight that helped propel me to do everything I did. I had kind of got a big head, I had all these knockouts, I was beating everybody, so I didn’t take training as seriously as I could. I took everything for granted. Losing the fight to Medina woke me up to reality and my whole game plan changed.”

Over the next 16 months, the newly improved Johnson won four fights before he left America for the first time in his life to face Medina again, this time in France.

“That fight was close,” Johnson acknowledged. “My trainer Robert Mitchell came up to the ring at the end of 10th round and said, ‘Son, if you want to win this fight, you’ve got to knock him down or knock him out, there’s no way they’re going to let you leave with this belt if you don’t do one or the other.’

“I listened to him, got off the stool and about a minute into the 11th round, I knocked him down with a straight right hand.” 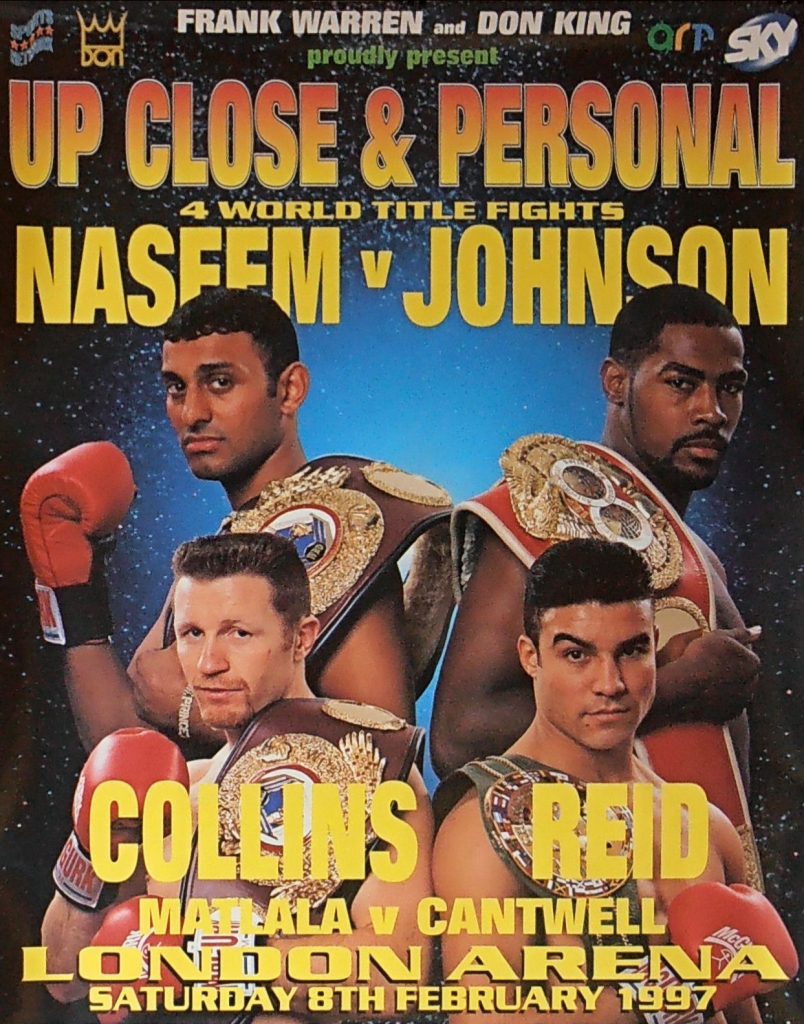 Johnson claimed a 12-round split decision. However, despite his new status as champion, the American didn’t get to enjoy the trappings of success.

“It was just the way it was,” he explained. “I never really had a hometown, even when I lived in Detroit. I never had a home base, no home following because I was always on the road. Even as champion, I never had the luxury of being that champion around the city. I wasn’t really well-known. I never let it affect me in what I wanted to do and had a simple mind. I always thought sooner or later somebody will pay me some attention.”

Regardless, Johnson continued to best respected fighters including Orlando Soto (UD 12), Francisco Segura (UD 12), Manuel Medina (UD 12) and Ever Beleno (TKO 12). What eluded him, however, was a big fight but finally, after multiple date changes, Johnson faced Hamed in a unification fight in February 1997. As well as facing the supremely talented Hamed, Johnson also had to deal with a hoax call saying his wife was involved in a plane crash, death threats and his team being jumped in the hotel lobby.

Johnson gave his best but was knocked out in eight rounds by Hamed.

He continued to box for the wrong reasons and went a pedestrian 7-7. “I spent my career not having anybody I could depend on and I found myself doing something I never thought I would do, I found myself selling my name,” said Johnson (51-10-2, 28 knockouts). “I was taking fights, working a job, getting off work and flying overseas to take a fight. I realized I was hurting myself, and it was time to pack it up and walk away healthy.”

Johnson, now 55, is married, lives in Detroit, he has four sons and 13 grandchildren. He works a day job, making gaskets for cars.

BEST JAB
Manuel Medina: It was long and awkward.

BEST DEFENSE
Naseem Hamed: His lateral movement, his upper-body movement and he’s a southpaw. I’ve always had trouble with southpaws.

FASTEST FEET
Medina: I had to make multiple adjustments. You really couldn’t find a way to get to him because he was switching up, doing different things.

SMARTEST
Hamed: He caught me at a good time. He was good at playing tricks on you, he was good at getting in your mind, putting things in front of you and taking it away from you at the same time.

STRONGEST
Ever Beleno: He was tall, lanky and had good upper-body strength. Troy Dorsey was physically strong but Ever Beleno was the strongest.

BEST CHIN
Troy Dorsey: I’ve never perceived myself to be a devastating puncher. Most of the time I didn’t throw punches to knock you out, I threw punches to whoop your ass. Once I learned how to put you behind that jab and I could hit you at will, that’s what I would do. I was never the kind of guy who was always looking for knockouts. Knockouts were only good for me when you hit a guy with a punch he don’t see. Dorsey had a helluva chin, he was a rough guy to fight. He had the best chin that I hit on a regular basis.

BEST BOXING SKILLS
Medina: He could switch up on you. He could do multiple different things right behind each other and give you different looks.

BEST OVERALL
Medina: Once again, Manuel Medina. Yes, Naseem beat him like he beat a lot of guys at a different time in their careers. Naseem was a good fighter, he was an excellent champion because his style was totally different from what you’re used to. I fought Medina three times and three times it took me everything I had to figure out how to win.