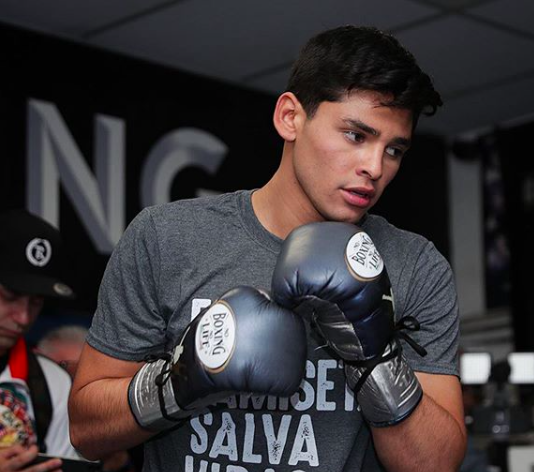 Young gun Garcia will test his popularity, as he's booked to fight on Valentine's Day.
20
Jan
by Michael Woods

Lightweight contender Ryan Garcia talked up his Valentine’s Day date night, a fight against Francisco Fonseca, at a media workout Monday afternoon at the Westside Boxing Club, in Los Angeles.

Yes, the social media magnet, boxing’s top heart-throb, will be onstage on the night for lovers, with promoter Golden Boy betting that his allure will work on an evening where there’ll be pressure for some folks who’d attend his bout to instead choose another entertainment option.

The current WBC silver lightweight beltholder Garcia holds a 19-0 mark, with 16 KOs. Currently rated No. 6 by The Ring, he will seek to do better against the Nicaraguan contender Fonseca (25-2-2, 19 KOs) than other young guns, Gervonta Davis, and Tevin Farmer, did.

The 21 year old said yes, he could well be matched with Jorge Linares, but he wants Linares to look good in his next bout, because he wants to be challenged. He admitted, he wants to be tested. He thought he’d get bigger push back in his last outing, Nov. 2.

Here are some bullet point takeaways, quotes and tidbits from the ascending lightweight:

–Against Fonseca, at the Honda Center in Anaheim, he said he will be stalking, coming forward, and he will be forcing opportunities.

–He was asked about Gervonta Davis, who Garcia has said he’d like to fight, this year. Garcia busted on Davis, saying he backtracks on the possibility of meeting Garcia, and he does that in fights, “when he gets tired.”

–“I”m not even at my prime, but I could beat him right now,” he stated. “For sure, a thousand percent,” him versus Tank will happen this year. He wants Tank to win handily his next fight, so everyone thinks Tank will beat him. That will up the shock value of a Garcia victory, he shared.

–Also, he doesn’t care so much about titles. Like, Davis fighting Yuriorkis Gamboa with a belt on the line, Garcia basically feels like, whatever. Gamboa going 12 with Tank, with a torn ACL, kudos to Gamboa, he declared. Now, he admitted, he busts on Tank some, but “he’s a helluva fighter.” He’d be a fan of the Baltimore fighter, very much, if he weren’t a soon to be rival.

–He foresees beating Tank, and then everyone will beg him to fight.

–Also, Garcia said he will leave the sport, at age 26. Beat ’em all, then leave. “I’ll have everybody speculating what coulda happened. I’m leavin,’ I dipped, I beat everybody, bye!”

–Fighting Davis, and also fighting Devin Haney, wins over them, that would shoot him to another level of stardom. He will be on the level of Muhammad Ali when he is the underdog, and beats Tank and/or Haney.

–Garcia said he trained this time in La Jolla, not Mexico, but has loved being so close to Canelo.

–Garcia said yes, he could well be matched with Jorge Linares, but he wants Linares to look good in his next bout, because he wants to be challenged. He admitted, he wants to be tested, wants to be stepped up in competition.

–What does Garcia think of the You Tubers fighting? Jury still out, he said. “I guess it’s entertaining for now, but I don’t know where it’s gonna go from here.” He thinks it should be done selectively, and smartly. 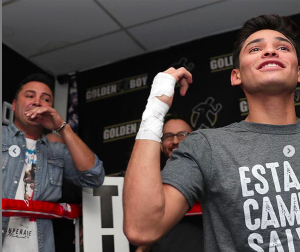 ALSO: Oscar De La Hoya, the head of Golden Boy, made the rounds at the media session, and sounded quite enthused about the barely out of his teens puncher/boxer.

The promoter said that he thinks Valentine’s Day is a great spot for the hunk to fight on. Couples can come see the event, he said.

And yes, Ryan will want to be more impressive than Davis was against Fonseca, he said. That will put a good kind of pressure on him.

“I would say this is like his coming out party,” Oscar said. “I think he’ll be a world champion this year. By the end of the year, yeah, we’re gonna see Ryan in a world title fight. He’s still learning, he’s growing. He’s getting better, he’s getting stronger, he’s getting faster, and he’s getting wiser. This year will be a huge year for Ryan.”

Who, then, who would you like to see Ryan matched with? “Whoever’s the best,” the promoter replied.

He also said he likes the pace of the route Ryan is taking. He is building a better base, and will have more longevity, he said, than some other guys, maybe, who snag belts early, but aren’t as focused on their foundation.

Oscar said “we made him one of the richest young prospects in boxing,” and why wouldn’t he be happy? Yes, Garcia and Team Golden Boy had sparred some, but it’s like family, how family members sometimes beef, but then they revert back to the loving vibe.

Oscar was also asked who Canelo would be fighting next, but he wouldn’t tip his hand. 168, 175, he’s not sure at what weight Canelo will scrap at, on Cinco de Mayo weekend. Would coming down to 160 be a bridge too far? Oscar said going from 160 down to 147 was a “huge mistake” for him, but Canelo knows his body best.

Oscar said no, Billy Joe Saunders is NOT at the head of the pack for options for the Mexican lead dog.

And what’s next for Vergil Ortiz? A fight in LA, probably. “We wanna make him a global star, so Vergil’s on his way, man, he’s right there, he’s gonna be knocking on everyone at 147, so it’s gonna be a lot of fun,” the promoter told Abe Gonzalez, of NY Fights.

Blair Cobbs (age 30; 13-0-1) is “one or two fights away,” he said, and Cobbs has a heck of a back story, so “I want him to succeed…he’s a guy who bring a breath of fresh air to the sport.” Cobbs fights underneath Garcia on Hallmark’s best sales day of the year, meeting 36-year-old Samuel Kotey, a 23-2 Ghanian.

Plus: Oscar was asked about Julio Cesar Chavez Sr., who has been doing exhibitions. He is interested in maybe fighting Chavez, for charity. With headgear? At what weight? TBD…But Oscar said he’d lose about 20 pounds before doing it.