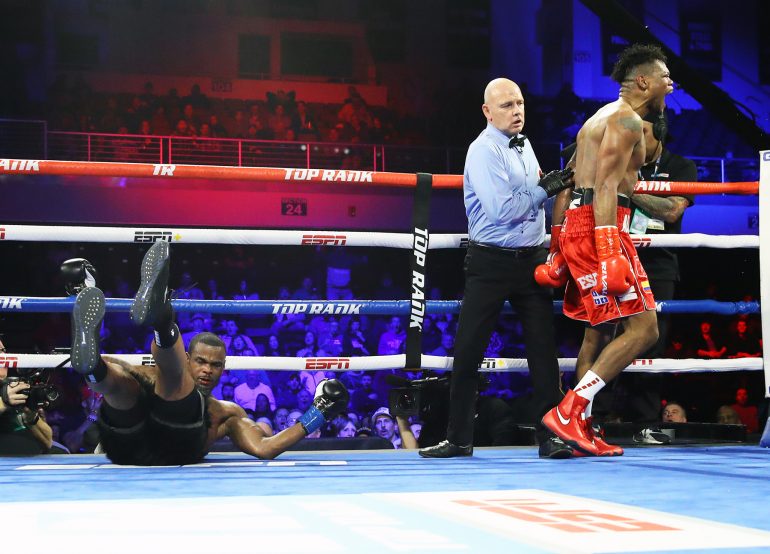 The first six rounds saw Alvarez (25-1, 13 knockouts) doing a bit more than his opponent, staying smart but more cautious than those paying to watch up close preferred.

Then, the ending, the pound of flesh climax which made watchers forgive a slow pace to the end point. Seals threw a left hook and was following with a right, but Alvarez saw the opening and landed his right after the hook missed. It landed flush, and Seals was discombobulated. He fell backwards and his head hit the bottom rope. The ref waved it off at that point, seeing that Seals (24-3, 18 KO) wasn’t recollecting his senses.

Afterwards, Alvarez told ESPN commentator Mark Kriegel he had practiced this setup, drilled it heavy in camp. And how far is he from being the guy who stopped Kovalev? “I was out of the ring for 11 months and I wanted to come back as the fighter who beat Kovalev,” he said.

He will be matched with Long Islander Joe Smith, coming off a win over Jesse Hart just last week in Philadelphia, in a match of two fighters who possess a game changer right hand.

“It was an ugly fight,” said analyst Tim Bradley…but the finisher made up for it.

The 35-year-old Alvarez had tasted the nectar in August 2018 when he stopped then-WBO 175-pound champ Sergey Kovalev, but dropped it back to the Russian in the immediate rematch last February.

The Alabama born Georgia resident Seals, who had been working as an Uber driver while trying to get his career back on track, is two years older at age 37.

The Colombia born Alvarez had been on the pine for a full year, so going in, Seals had to think he might be seeing a rusty opponent. Alvarez ripped an Achilles before the Kovalev rematch, he said, so maybe, the thinking went, he’d be better after having rested that body.

In the first, they started out respectful, low volume, both doing some scouting and getting the muscles and tendons loose.

In round two, they stayed in slow mode. In the last third, Alvarez got some work done. A lead right landed pretty clean, but Seals slipped enough to not get buzzed by it. Also, the Alvarez jab was starting to find the right range.

To the third – we heard boos from some of the watchers who had enough of the warmup-level pacing.

In the fourth, Seals started to get a bit more comfy taking the guns from the holsters. Alvarez’ jab was a solid weapon, it’s long and sharp. In the fifth, Alvarez landed a right, real clean, as Seals backed up with hands down. It came at the tail end of the round.

In round number six, Alvarez looked up at the clock with more than a minute left, so we wondered how his stamina would be moving forward. In the seventh, the crowd stayed polite and unmoved. Too much waiting, not enough pep in the step or the hands of either man. Then, a right clipped Seals, and he’d take his second stoppage loss as a professional.

In the TV opener, Felix Verdejo, seeking to re-energize his career, took on  Manuel Rey Rojas (18-4, 5 KOs), and the Puerto Rican hitter got the nod after ten rounds.

Salas, working out of Vegas, has said that Verdejo has skills, but they need to be organized better. Also, brittle hands haven’t helped the kid. 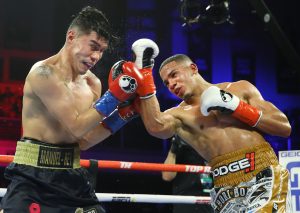 Kriegel spoke to the winner post-fight. Was he happy with the win? He gave himself a C, and said, in Spanish, that he wants to keep getting better. How far is he from becoming what we thought he’d be? “I know I’m near,” he said, and promised to keep working hard to get to the promised land place.

The lightweight Verdejo was matched a certain way, this one on paper was supposed to be a get back on track continuation. He is just 25, and came in owning a glittering – on paper – record of 26-1 (16 KOs). But the numbers don’t tell the tale; Felix was mega hyped, supposed to take over on the Miguel Cotto track. But there were too many UDs, instead of KOs, and there was having too much fun, instead of knuckling down, and being married to the sport.

Antonio Lozado Torres was supposed to be a better on paper than in the ring foe when he met Verdejo in NYC in March of 2018. But Felix underperformed, Torres rose to the occasion, and Felix tasted his first loss. That stung, but some of the zest and the zing in the relationship between him and boxing, and promoter Top Rank had already left the building.

Early on at Turning Stone, Verdejo pumped a jab, but he often waited too long between tosses. At times, he lacked full on commitment to his launches. He’d 3/4 arm a punch, it would fall short, because he didn’t propel that back foot to punch through the foe.

In round four, we saw a mouse under the left eye of the Puerto Rican, something to keep an eye on, because you knew Rojas, a 25 year old Texan, would be.

In round five, Rojas tagged the Puerto Rican clean with a right. Felix smiled, a “you got me” signal. At times, he’d make Rojas miss, but he wasn’t often enough making him pay.

You watched, and kept looking for it…was this a better Verdejo? Did you see tweaks to the games…a different, more fiery mindset? Better game planning, and staying attached to a blueprint? Felix still stood straight, tall, and maybe you think he’d do better crouching more. And the jab, he was busy with it at times, but looking to fire it through the face of the foe would help bust him up, sap his energy, work to help break him down, soften him up.

It is possible Verdejo gets critiqued harder, because expectations were so high when he debuted and rose the ranks. He’d rip a combo, low and then high with the left, in round eight, and you’d recall why he was salivated over.

The tenth and final round, activity from both was still decent. But this round like the others saw neither man kicking into another gear, and lifting this fight up to another level. You saw Rojas land a counter right as Verdejo tried to get out of range, but did so a tick slow, and wondered how a B plus or A level fighter would punish Felix for that violation.

Felix fought twice in 2018, once in 2019…and this was a decent outing. Perhaps more time with Ismael Salas will propel him backwards, to the place he was five years ago.