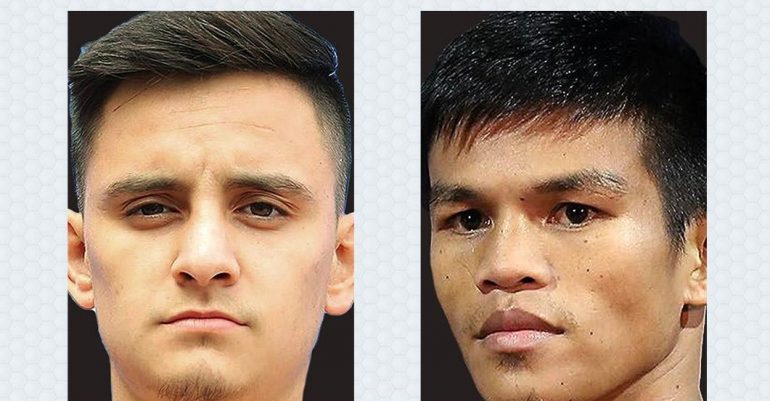 Sandoval is a 20-year-old prospect who possess a very exciting style. In July 2019, Sandoval fought on a Golden Boy card for the first time by scoring a dominant stoppage win against Marco Sustaita to defend his WBC Youth Intercontinental Flyweight Title. Then, he returned in October to stop Gilberto Gonzalez in the fifth round. Now, Sandoval will look develop into a full-fledge contender against his toughest opponent to date.

“2020 will be my year, and I will demonstrate why on February 6,” said Ricardo Sandoval. “I know that Raymond Tabugon is very strong, but I’m coming with a strong desire to win and get closer to a world title opportunity. I’m going to deliver a great show for all the fans, and I’ll work very hard to walk away with my hand in victory.”

Tabugon is a 28-year-old veteran who has faced former world champions Juan Francisco “El Gallo” Estrada, Luis “Pantera” Nery and Angel “Tito” Acosta. Now, he’ll look to use his experience to hand Sandoval the second loss of his career and position himself for more opportunities.

“I can’t wait to get back in the ring on February 6,” said Raymond Tabugon. “I had a small setback in my last fight, but I’m working hard to return better than ever. I want to thank Golden Boy and Sanman Promotions for the opportunity, and I promise to bring lots of action!”

Also, former heavyweight champion Michael “Double M” Moorer will be the special VIP guest for this event. Moorer will be in attendance for this event to meet fans, sign autographs and take pictures inside the Fantasy Springs Special Events Center. The meet-and-greet is open to the public with the purchase of a ticket to the event.

In the co-main event, Oscar “El Jaguar” Negrete (18-2-2, 7 KOs) of Tierralta, Colombia and Alberto “Impacto” Melian (6-1, 4 KOs) of Buenos Aires, Argentina will meet in a 10-round bout for the vacant WBA International Bantamweight Title. This matchup is sure to produce fireworks as it will feature two contenders who have unfinished business that started when Negrete defeated Melian at the 2010 South American Games.

Leonardo “Leon” Baez (17-2, 9 KOs) of Mexicali, Mexico will return in a 10-round super bantamweight battle.

Anthony Reyes (7-0, 5 KOs) of Coachella, Calif. will participate in a six-round super bantamweight fight in front of a hometown crowd.

Oscar Acevedo (6-0) of Garden City, Kansas will return in a six-round lightweight clash.

Sandoval vs. Tabugon is a 10-round super flyweight fight presented by Golden Boy. The fight will take place on Thursday, February 6, 2020 at Fantasy Springs Resort Casino in Indio, Calif. The event will be streamed live on DAZN, RingTV.com and on Facebook Watch via the Golden Boy Fight Night Page beginning at 10:00 p.m. ET/7:00 p.m. PT. The series will also be available on Pluto TV’s FIGHT Channel and regional sports networks around the nation. To see when and where the series is available in your area click here.

Tickets for the event are on sale and start at $25. Tickets will be available at the Fantasy Springs Resort Casino box office, by calling 1-800-827-2946, or by purchasing online at www.fantasyspringsresort.com.